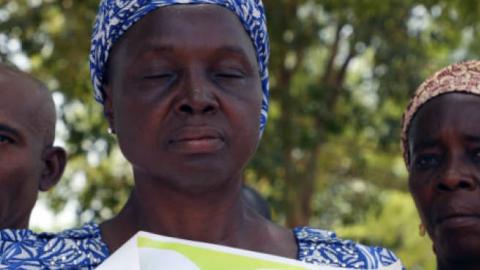 An ongoing Islamic extremist project to exterminate Christians in sub-Saharan Africa is even more brutal and more consequential for the Church than it is in the Middle East, the place where Christians suffered ISIS “genocide,” as the U.S. government officially designated. A growing number of these African countries are seeing the rise of ISIS- and al-Qaida affiliates, and non-state terrorists like them, who specifically target Christians in their quest to establish Islamist rule.

These African churches are the youngest Church communities, whose exponential growth has prompted the Vatican and others to see Africa as “the beacon of hope for the Church.” Data released in 2019 by the Center for the Study of Global Christianity at Gordon-Conwell Theological Seminary show, for the first time, Africa as the continent with the most Christians, numbering 631 million, surpassing even Latin America. Whereas hundred years ago, there were barely 2 million Catholics on the continent, now there are 230 million. But the bright future of African Christianity is imperiled by a fast-growing and violently intolerant Islamist trend, and the plight of these persecuted Christians has received far too little attention from the Western governments, NGOs and the media.

No place in sub-Sahara is more notorious for religious hostility against Christians than Nigeria, Africa’s most populous country. Over the last decade, more Christians have been deliberately murdered by Islamic extremists in Nigeria’s northern and central belts than in all the Middle East combined.

In the north, Boko Haram is the biggest scourge of Nigerian Christians. Founded in 2009, that group, whose name means “secular education is forbidden,” works to violently suppress all ideas and areas of knowledge outside of Islam. In its range of operations in rural northern Nigeria, the state governments already enforce sharia (Islamic) law, but Boko Haram aims to establish an Islamic state.

Under Abu Bakr al-Baghdadi’s Islamic State, Boko Haram split into two factions. One is officially affiliated with ISIS and is referred to as the Islamic State West Africa Province (ISWAP). The other, known as the Shekau faction, swore fealty to ISIS but was rejected because it would not give up killing Muslims who stood in their way.

Regarding their treatment and view of Christians, there is no difference between the two factions. In one video rant, Shehau leader Abubakar Shekau declares: “This religion of Christianity you’re practicing is not the religion of God. It’s paganism. We are trying to coerce you to embrace Islam because that is what God instructed us to do.”

Both employ extremely bloody and cruel tactics to accomplish this forced conversion of the Christians who account for nearly half of Nigeria’s population. Boko Haram’s open boasts about its abduction of Christian girls for sexual enslavement and coerced conversion to Islam impressed ISIS, which, in 2014, cited Boko Haram’s practice admiringly in its early fatwas blessing the practice of sexual enslavement of Christians and Yazidis in Iraq and Syria. One example of this horrific practice has garnered some Western attention, thanks to the activism of her mother, Rebecca: Leah Sharibu was kidnapped from her school in Dapchi village by jihadists with 109 other schoolgirls in February 2018. Because the 14-year-old refused to renounce her Christian faith — “I am a Christian,” she courageously told the armed captors surrounding her in the jungle, recounted her schoolmates — she was taken as a slave for sexual abuse by the militants, while the others were freed.

Boko Haram has continued to mount atrocities against Christians and was notably active during the past Christmas season. Unfortunately, details are often scarce, and the Nigerian authorities do little to document or prosecute in these cases:

On Dec. 22, Boko Haram jihadists attacked two passenger buses in Borno state, and, while releasing the Muslim passengers, the Christians were held back and separated by gender. Three men, including a pastor from Deeper Life Bible Church, were killed on the spot, while the pastor’s relative and two humanitarian workers were abducted.

On Christmas Eve, another persecution report came from a Christian village near the town of Chibok in Borno. Dozens of Boko Haram jihadists driving trucks and motorcycles stormed into Kwarangulum, shooting residents and looting and burning their homes.

The day after Christmas, Boko Haram’s ISIS faction released a film by its news agency Amaq, a 56-second video that showed black-clad militants beheading 10 blindfolded Christian men and shooting another said to be a Muslim.

“This message is to the Christians in the world,” the voice-over to the video said. “Those who you see in front of us are Christians, and we will shed their blood as revenge for the two dignified sheikhs,” referring to Bakr al-Baghdadi, who committed suicide when confronted by U.S. troops last fall and his spokesman. It noted that the victims were “captured in the past weeks” in Nigeria’s northeastern Borno State but provided no names or further identifications.

Also on Dec. 26, a Christian bride-to-be and her entire bridal party were "massacred()"https://cruxnow.com/church-in-africa/2019/12/nigerian-diocesan-spokesma… while traveling in Adamawa state to prepare for the Dec. 31 wedding. Father Francis Arinse, a diocesan communications director of Nigeria’s Catholic Church, reported that Martha Bulus, her sister Zainab and five others were ritually slaughtered. “They were beheaded by suspected Boko Haram insurgents at Gwoza on their way to her country home,” Father Arinse told Catholic News Service.

On Jan. 3, the chairman of the Christian Association of Nigeria (CAN) in Adamawa state was abducted in a raid on Michika town. In a Boko Haram video released on Jan. 7, Rev. Lawan Andimi asks for help from the president of the Church of the Brethren in Nigeria, among the region’s largest churches. While expressing hope that he would return to his wife, children and colleagues, Pastor Andimi counsels: “Don’t cry; don’t worry, but thank God for everything.”

In Nigeria’s Middle Belt, it is the Fulani who are waging a religious cleansing campaign against the Christians. The Fulani are a massive nomadic tribe, spanning parts of several countries, that have an Islamic-extremist component. They typically kill with their machetes and burn churches, along with Christian homes, though, increasingly, they come by motorcycles and vehicles, equipped with AKs. There is substantial research showing weapons are trafficked in from outside the country, including the Middle East. About the Fulani, Catholic Bishop Wilfred Anagbe of Makurdi told Aid to the Church in Need: “There is a clear agenda — to Islamize all of the areas that are currently predominantly Christian in the so-called Middle Belt of Nigeria.” It was in his diocese two years ago that jihadists massacred 17 worshippers and two priests at an early morning Mass at St. Ignatius Church.

In a Wall Street Journal piece, datelined Dec. 20, Lagos, Nigeria, French philosopher Bernard Henri Lévy, who visited Nigeria to document the atrocities, describes the situation there as a “slow-motion war” against Christians. In Nigeria’s Kaduna State, he filmed the testimony of several victims, among them a young evangelist, Jumai Victor, 28, who survived having her left arm macheted off, joint by joint.

Lévy reports, “Fulani extremists stormed into her village on long-saddle motorcycles, three to a bike, shouting ‘Allahu akbar!’ They torched houses and killed her four children before her eyes.” Lévy heard several reports that the Fulani are getting military training from Boko Haram, which itself is getting assistance from the Middle East.

Such harrowing incidents are repeated in Christian village after Christian village. The purge is systematic and relentless. The Bishops’ Conference of Nigeria has described the area as “killing fields” due to the frequency and scale of the anti-Christian violence. Archbishop Ignatius Kaigama of the Archdiocese of Abuja told Vatican Radio that he sees the Christmas beheadings as part of a continued effort to establish an Islamic state. According to the archbishop, ISWAP hopes to “be able to destroy Christians, take over the country and even the neighboring countries.”

In Washington, I interviewed two survivors of such raids: one, a teenage girl who witnessed her father and brother being shot to death in their living room, and the other, a middle-aged man who survived a bullet in his head and provided corroborating x-rays. Both described what the Nigerian bishops, pastors and Lévy also recount: Extremists raid a Christian area, usually at night, and demand that the men, and sometimes women, convert to Islam on the spot. Those who refuse are summarily killed. The U.N. reports that 2 million Nigerians have fled their homes into camps because of the terror. Not all are Christians, but the photos of abandoned and ruined churches from north and central Nigeria give mute testimony to what is taking place there to the Christian community. Between 2009 and 2017, Boko Haram bombed and attacked 900 churches, some of which, like St. Theresa’s Catholic Church one Christmas, were filled with worshippers.

The Fulani terror has spread through Mali and over the past year began spilling over the border into Burkina Faso. Whereas previously, the 20% of the population that is Christian peacefully coexisted with the Muslim majority, in 2019, northern Burkina saw two Catholic priests, including a Spanish missionary, and two Protestant ministers shot, along with their faithful in attacks on Christian services by Fulani motorcycle gangs. As of Dec. 9, more than 560,000 internally displaced persons from the areas of the raids were registered by a government aid program. Thousands of schools have been closed after Fulani raids on rural Burkinabe schools that killed teachers and students.

Islamist terror is not limited to Africa’s West. Shebaab, an extremist group in Somalia, stages attacks in Kenya and elsewhere along the eastern coast. Over the past two years, Mozambique, which is mostly Christian, has experienced a ruthless Islamist jihad from across its northern border. Christian and Muslim civilians in the north are the primary targets. Hundreds have been killed, some beheaded and entire villages burned. Churches, schools and even hospitals are targeted as “un-Islamic.” Thousands have been displaced from their homes.

The Catholic bishop president of Mozambique’s Episcopal Commission of Justice and Peace, Bishop Luiz Fernandes, wrote a pastoral letter read aloud in churches before the papal visit there last September. In it, he accused national authorities and the international community of doing little to curb the attacks, which he called a “cyclone.”

Bishop Fernandes said people in the affected areas get no protection from the authorities and receive hardly any humanitarian aid. The government has “rarely been able to prevent the attacks because when they do occur the army is not there and often arrive late,” said the bishop. Lévy made a nearly identical observation about Nigeria, stating that “the soldiers didn’t come; or, if they did, it was only after the battle; or they claimed not to have received the texted SOS calls in time, or not to have had orders to respond, or to have been delayed on an impassable road.” The U.K.’s Baroness Caroline Cox, who visited Nigeria last November, pleaded for local and international governments to do more to protect and aid these victims.

In the Middle East, ISIS’ impact on Christians has been devastating. In less than 20 years, Islamist extremism resulted in the eradication of some 90% of Iraq’s ancient Christian community and up to 50% of Syria’s. The U.S. government rightly designated ISIS assaults against these Christians as “genocide.” These were two of the four most robust native Christian communities left in the Middle East at the beginning of the 21st century.

The question is pressing: Will the youngest Christian community, in Africa, meet the same fate, under the same pressures, as the oldest Christian community, in the Middle East? Will we passively stand by while Leah Sharibu, Andimi, Jumai Victor and untold numbers of others suffer unspeakable horrors? African Christians need our prayers, our humanitarian engagement and our churches’ and government’s aid to face this crisis.