America Must Be More Aggressive against Chinese Incursion to Markets, Universities

Beijing’s digital censorship is the tip of the iceberg. 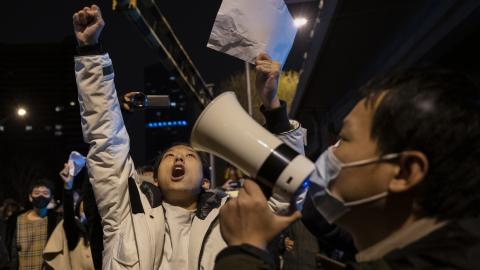 In the latest attempt to squash human rights and civic freedoms, China has employed extreme digital censorship to conceal nationwide protests spurred by the fire that erupted in November in a high-rise apartment building in a Uyghur-majority neighborhood in Urumqi.

Stringent internet censorship is only a small portion of China’s larger ambition to achieve complete digital authoritarianism. By using state-of-the-art artificial intelligence surveillance, advanced biometrics and mandatory DNA testing, the communist regime has managed to herd millions of Uyghurs into concentration camps and forced labor facilities while turning an entire region into an open-air prison.

Beijing’s digital authoritarianism is an integral part of its brutal oppression of religious and ethnic minorities through the pervasive use of advanced surveillance technology and myriad digital tools. To worsen matters, more than 80 countries have now adopted Chinese surveillance technology, allowing China to export its repressive practices overseas. This subtle and sometimes silent form of social control is especially nefarious.

China’s technological ambitions reach beyond its borders. The Chinese Communist Party also hopes to harness its vast surveillance power to advance the larger ideological project of the state, which combines authoritarianism with practical efficiency to meet the needs of the country’s vast populace. Deemed as “wolf warrior diplomacy,” Beijing seeks to increase its internal bureaucratic control while zealously spouting communist propaganda abroad.

By failing to take more aggressive action, the United States and its allies have allowed China to penetrate and corrupt some of our greatest markets. Increasing Chinese influence over dominant corporations not only diminishes our economic power, but also poses a direct threat to democracy and liberty.

In recent years, Washington has taken numerous precautions to resist the Chinese stronghold, such as barring U.S. government agencies from using telecommunications equipment made by China’s Huawei and ZTE to help build out its 5G networks. More recently, state and federal agencies have started to ban TikTok, which is owned by Chinese-based company ByteDance, from government-issued devices. Leading advocates of banning TikTok, U.S. Rep. Mike Gallagher, R-Wis., and Federal Communications Commission Commissioner Brendan Carr, likened the platform to “digital fentanyl” because of its highly addictive, destructive and corrosive impact on users, young Americans in particular. The U.S. has also enforced export controls on advanced computing chips that have been wielded by China to strengthen its military system and create weapons of mass destruction.

It is no secret that the communist regime is unstable. Its domineering tactics to mobilize the economy have resulted in an almost static GDP and increase in youth unemployment. By employing key diplomatic levers such as transnational networks, banks and university professorships, the U.S. and its allies can drastically destabilize the authoritarian regime and undercut Beijing’s attempts to deliberalize the global order.

First and foremost, as Chinese leader Xi Jinping and Russian President Vladimir Putin partner to exterminate democratic ideals, we must proactively promote and defend them. Nations must align and partner with the United States to counter Beijing’s attempts to create a New World Order rooted in Leninist concepts of power and subversion. We cannot neglect to seek engagement and partnership with other countries outside of the European Union such as in Africa and Southeast Asia. Through a combination of defensive and offensive measures, the U.S. and its allies can limit the global adoption of Chinese 5G network infrastructures and place international pressure on the communist regime to adopt disciplines on state subsidies.

The expansion of Wall Street giants like JPMorgan, Goldman Sachs and Morgan Stanley into Chinese markets has also undermined the United States’ ability to promote Taiwanese sovereignty and condemn Beijing’s human rights record. A 2022 report from Hong Kong Watch and the Helena Kennedy Centre for International Justice at Sheffield Hallam University found that three major stock indexes include at least 13 companies that have subsidized or contributed to the surveillance state in China’s Xinjiang region.

Relying on Chinese markets greatly hinders our fight to defend democracy and civil liberties. Instead, we must enforce Buy America rules to reduce China dependency and increase domestic production. Furthermore, we must require strict reporting and data gathering on Chinese companies in the U.S., and impose strict capital market sanctions. The Communist Party can no longer be permitted to sway our valuable corporations and businesses into propagating illiberal ideals.

Finally, we must mobilize American colleges and universities to actively condemn and resist China’s state-sponsored espionage. For decades, China also relied heavily on proprietary plagiarism to avoid expensive and time-consuming research and development. The Department of Justice has found that China commits up to 80% of worldwide intellectual property theft.

Under no circumstances should scientific and commercial advances be achieved through the co-opting of U.S.-funded researchers and exploitation of prime academic institutions in the United States and abroad. Instead, we must collaborate with institutions to strengthen public-private partnerships, secure remote and collaborative research, and safeguard academic freedom.

By allowing hostile actors to invade our networks, we set a precedent that not only threatens our own future, but also that of democracy worldwide.

China’s iron grip over U.S. markets has forced our diplomats and senior officials to deny support for Taiwanese independence and remain complicit in China’s campaign to topple the global order. The future of democracy is at stake, and the weight of history presses us to prevent the free world order from falling.

The U.S. already has numerous political, economic and diplomatic tools at its disposal to combat authoritarian regimes, but without vigorous enforcement, these tools remain worthless. American companies and lawmakers must recognize that a government with no respect for human rights and religious freedom will eventually hurt their own interests.

Read in the Dallas Morning News.