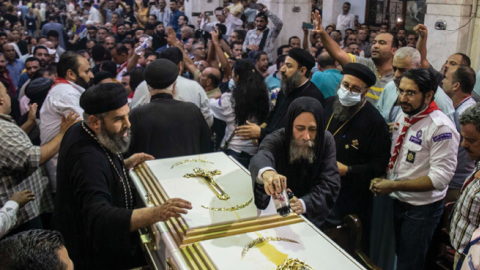 Caption
Mourners react during a funeral for victims killed in a fire at a Coptic church in Giza on August 14, 2022. (Mahmoud Elkhwas/NurPhoto via Getty Images)

On August 14, the Saint Macarius (Abu Seifein) Church in Giza, the western part of Cairo, was destroyed in a fire. Forty-one people died, many of them children. The official explanation is that the fire was caused by an electrical fault—which is plausible especially since the church occupied a decaying, ramshackle building. However, since then there has been a rash of church fires in Egypt, which suggests that this is a new front in the attacks on the Copts, Egypt’s Christians.

Because of the horrendous death toll, the fire drew national and international attention. Egyptian President Abdel Fattah al-Sisi said on his Facebook page that he had "mobilized all state services to ensure that all measures are taken” and he phoned Coptic Pope Tawadros II to give his condolences.

Since Copts are often attacked by extremists, some have cast doubt on the official explanation and suspect arson, others saying that the emergency services took too long to arrive, something that the Egyptian government denies But even if the government version is correct, the death toll reflects the ongoing discriminatory government restrictions that have plagued Egypt’s Christians for decades.

Until a slight loosening of the law in 2016, construction or repair of a church, even a church window or toilet, required the state President’s, later a Governor’s, permission. Few such permits were given. Churches have collapsed after years of waiting for approval for repairs.

As a result, Copts built churches illegally and clandestinely. In the 1970’s, about two-thirds of Egypt’s churches were built illegally Saint Macarius is one of these. It was housed in a four-story building by a narrow alley in the densely-populated Imbama neighborhood, its electrical and other fixtures were substandard, and it had no emergency exits. When the fire broke out people perished as they were jammed into narrow doors and stairwells. The crowded streets hampered attempts at rescue. Church officials have called for reform of the law to help prevent future tragedies.

But there are good reasons to think that something more nefarious happened. As Sam Tadros pointed out in these pages, the fire broke out during a church service, and August 14 is the anniversary of the Raba’a massacre. That was the day in 2013 when Egyptian security forces massacred hundreds of Muslim Brotherhood member in Raba’a. Members of the Brotherhood responded by attacking and often burning over a hundred churches and church buildings, one of them in Imbama. The Brotherhood has targeted Copts ever since.

In addition, there were six more church fires in the 8 days after August 14. Two of them were in the Giza area where Saint Macarius is, one in Alexandria, one in Assiut and two in Minya. Egyptian authorities have denied that there is evidence of arson and attribute most of the fires to faulty generators, although one started in a pile of garbage But this is a suspicious rash of church electrical failures—averaging almost one a day. There are reports that security officials “were in a state of high alert” and were looking for a terrorist group that had carried out at least some of these burnings

Now, even senior church officials have raised doubts about the official line. Bishop Ermia, who is close to Pope Tawadros II and was the press secretary to the previous Pope Shenouda, recently said, “[The church fires] occurred systematically...this is an alarm to the state... This must be stopped. This should be investigated.” The Bishop would not have said even these vague words without clearing it at the highest levels of the church.

It is awful enough news that Egypt’s Christians are suffering the effects of years of restrictions on building churches. Yet it is even worse news that they may, yet again, have also become the target of Islamic terrorists.