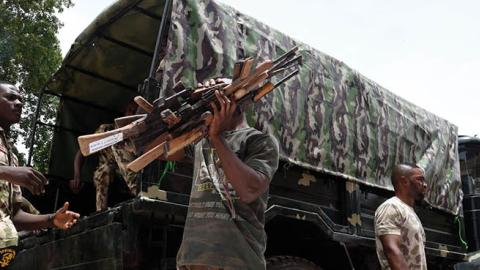 Nigeria is suffering from a devastating criminal insurgency in its northwestern states. Thousands of militants, known colloquially as bandits, have taken over swathes of the countryside, using military-grade weaponry to rustle cattle, terrorise communities, stage mass kidnappings for ransom, and overrun security forces. The conflict is liable to have immense long-term impacts on the socioeconomic development of the northwest due to both the humanitarian crisis it has engendered and its second-order effects such as the high number of children who are presently out of school for fear of kidnappings.

Drawing on extensive interviews with dozens of sources from across the northwest and wider country, this report identifies the root causes of the conflict and present conflict dynamics to inform policy responses.

Dispelling the sensational narratives of “Fulanization” that have gained prominence in the national discourse, it identifies how the conflict is rooted in various factors - such as the growing salience of ethnicity in land use disputes, under-development and environmental degradation, the failure of the criminal justice system, the rise of vigilantism and militia-based local security, and the breakdown of traditional conflict resolution mechanisms - that have overlapped and exacerbated each other over the preceding two decades, paving the way for the current crisis.

The research sheds light on the following dimensions of the crisis in the northwest:

It analyses how the bandits mobilise popular support by exploiting political grievances in northwestern communities, particularly with pastoralists, even as they fight primarily fight for personal gain. It finds that local vigilante forces, particularly the Hausa self-defence groups known as Yan Sakai, have helped fuel insecurity by engaging in egregious and indiscriminate human rights violations against Fulani and pastoralist communities; directly or in directly pushing many pastoralists into banditry.

Federal security forces have also sought to compensate for insufficient manpower and intelligence by profiling, harassing, or indiscriminately attacking pastoralists with little concern for collateral damage, exacerbating many of the underlying drivers of conflict.

Many local politicians and traditional rulers have also been complicit in aggravating the underlying causes of insecurity by, for example, managing matters of land use in a divisive or corrupt manner. On the question of the bandits' links to jihadists, the report find that jihadists have occasionally offered tactical support or advice to bandits but have failed to recruit a significant number to their ideology.

It shows that foreign militants are a minority among the bandits, despite widespread rumours within Nigeria to the contrary.

To conclude the study argues that efforts to mitigate insecurity in the northwest must look beyond kinetic approaches, which have repeatedly failed to ameliorate—and have indeed exacerbated—the underlying drivers of conflict.

First and foremost, to have any hope of addressing the crisis in the northwest, local, national, and international stakeholders must understand the multivariate factors that drive insecurity in the region.

Read the full report from Centre for Democracy and Development