The US Should Not Ignore the Plight of Nigeria’s Christians 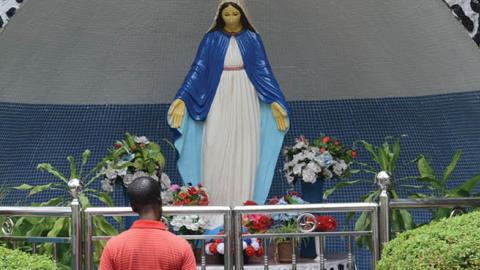 Nigeria’s long plague of jihadist violence and mayhem has reached new heights. Earlier this month, armed bands of ethnic Fulani herdsmen assaulted the mainly Christian areas along the border of the Plateau and Kaduna states of central Nigeria. Units of several hundred Muslim Fulani militiamen, along with their herds, entered villages along with war cries of “Allahu akbar” and fired AK assault rifles randomly through the streets and into homes, reportedly killing scores of civilians and burning hundreds of houses and acres of surrounding cropland.

One such attack, according to local journalists, occurred last week around Miango, twelve miles west of Jos, Plateau’s capital. Lasting five hours, it left dozens of Christians dead and more wounded, including Pastor Amadu Musa, a Fulani convert, as well as thousands displaced. Neighborhood-watch volunteers, misleadingly called “vigilantes,” attempted a defense with slingshots and rifles but were no match for the heavily armed Fulani jihadists. The Jos-based Third Army Division showed up only afterward, to cynically report the invasion as a communal clash. Local human-rights lawyer Solomon Dalyop made an often-heard allegation that local Christians make about the military: “The military has confirmed our fears that they have a hand in this particularly as they have gone ahead to arrest the natives who were protecting their houses, while more killings and destruction continued for three days.”

These areas and many others have come under repeated attack by armed, nomadic members of the Fulani Muslim ethnoreligious group, but the strength of force is new. The attacks have proliferated in an environment of impunity under President Muhammadu Buhari, the son of a Fulani Muslim chieftain. His persistent failure to protect these civilians and prosecute their attackers reveals a government that is not simply lacking capacity. Rather, at six years into the president’s tenure, this violence appears to have the state’s tacit approval and serves a Buhari political priority.

Fulani militias are just one source of mayhem in Nigeria today, alongside notorious terrorist groups and criminal kidnappers. While Boko Haram garnered international headlines with the first mass kidnapping of schoolchildren, the enslavement of Christian girls, and ISIS-like beheadings of “infidels,” it is widely recognized that in recent years the Fulani militants have surpassed Boko Haram as the most dangerous threat to Nigeria’s Christians. Accounts of Fulani herder attacks and growing extremism have come from an all-party parliamentary group in Great Britain, from the pontifical foundation Aid to the Church in Need, and from the Global Terrorism Database, established by the Department of Homeland Security and housed at the University of Maryland.

The Nigerian-based International Society on Civil Liberties and the Rule of Law (Intersociety) documented in its midyear report that “jihadist Fulani herders” were responsible for 1,909 of the 3,462 Christians killed in the country in the first half of this year. The remainder, Intersociety reports, were killed by ISIS-affiliated and other Islamist terrorists, their security-force collaborators, and the bandits who will kidnap, rape, and kill any Nigerian. Intersociety further finds that Fulani militias now target Christian areas in all six Nigerian regions.

Christian communities in Nigeria’s north and middle belt are being incrementally driven out as a result. Nigeria observer and journalist Douglas Burton told me in an email of similar atrocities last month in southern Kaduna in Zangon Kataf-Kafanchan area: “Our reporter says 90 percent of Atyap Tribe villages there are abandoned,” he notes. The Atyap are Christians or followers of African traditional religions.

Last December, the U.S. State Department designated Nigeria a “country of particular concern,” or one of the world’s most egregious violators of religious freedom, under the International Religious Freedom Act. At a press conference, Sam Brownback, serving as U.S. ambassador at large for religious freedom, described the response of the Nigerian government to such atrocities as “ minimal to not happening at all. ” He emphasized, “The government really needs to act.”

Instead, Buhari continues to push a theory that serves to both exculpate the militant Fulani herdsmen and deflect attention from efforts to seek any immediate policy solutions. He insists that the attacks are a climate-change-driven “clash” between two rural socioeconomic classes, farmers and herders. While climate change undoubtedly plays a role, it is an explanation that the U.S, State Department, in its 2020 report on international religious freedom, inexplicably adopts to the virtual exclusion of others. In an August 11 statement, Amnesty International repeated the unproven assertion of Fulani herder leaders that this month’s attacks near Jos were part of a communal clash even though Amnesty also acknowledged the absence of any official probe into the facts or underlying intent of the Fulani militants.

Attention should be refocused on the government in Abuja. Buhari’s priority appears to be to consolidate power in the Fulani and a few other northern Muslim ethnic groups. Christians, who are almost 50 percent of the population, and many of Nigeria’s 250 ethnic groups are being disproportionately excluded from power, and their rights to protection against Fulani militias are subordinated.

The Nigerian Catholic Bishops Conference has been in the forefront of pointing this out. In a series of statements and a protest march, it has consistently deplored the various atrocities, charging that “the rule of law has too often been disregarded, giving way to widespread impunity, leading to a progressive breakdown of good order.” In February, it sounded an “authoritative, blunt and to the point” alarm, as the Council on Foreign Relations noted, that “the very survival of the nation was at stake” because of the government’s unresponsiveness to the bloodletting.

On July 13, Nigeria’s Catholic Church was represented in hearings before the congressional Tom Lantos Human Rights Commission by Harvard-educated Bishop Matthew Kukah of Sokoto, the state at the center of a historical Fulani caliphate. Bishop Kukah, who has long engaged in dialogue with Muslim counterparts, provided further insights. Emphasizing that “the problem is not with Islam but the Salafist views perpetrated by those who insist on using violence to perpetrate their evil deeds,” he faulted the “Muslim elite” for “using religion as a tool for political mobilisation.” Significantly, he cited Buhari’s government for being “nepotistic,” showing a preference for appointing “men and women of his faith.”

Bishop Kukah gave as examples the chief justice of the supreme court and the leaders of both houses of the national legislature — an unprecedented all-Muslim top leadership of the main governmental branches. Other examples could have been the chief of army staff, a northern Muslim appointed in May, who, Nigerian-American academic Farooq Kperogi warned, threatens Nigeria’s national unity by further alienating the south and serving as “yet another” example of “tone-deaf but entirely predictable mismanagement of Nigeria’s diversity.” This follows the appointment, in January, of a northern Muslim as chief of navy staff, and, as documented by the rights group International Committee on Nigeria, the appointment of northern Muslims as heads of the independent electoral commission and of numerous ministries, including those on customs, immigration.

Buhari’s government has shown little concern for the Fulani’s Christian victims. On July 18, his spokesman issued a defiant response to Bishop Kukah, asserting that there is nothing “in our Constitution to state that political posts must be apportioned according to ethnicity or faith.”

The United States is the largest do­nor of humanitarian aid in Nigeria. As needs grow exponentially owing to spreading lawlessness, the State Department should extend its country-of-particular-concern status for Nigeria and otherwise keep the pressure on Buhari. We can and should hold him accountable.