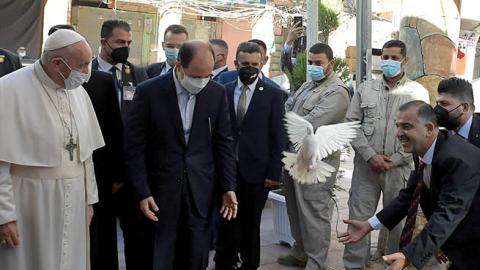 Caption
Pope Francis is welcomed by a dove's flight as he arrives in Najaf for a meeting with Grand Ayatollah Sayyid Ali Al-Husayni Al-Sistani on March 06, 2021 in Najaf, Iraq. (Vatican Pool via Getty Images)

Western media rightly praised Pope Francis’ historic trip to Iraq for opening new doors in Christian-Muslim relations. Ordinary Iraqis received it warmly, and it reassured and encouraged Christians and other religious minorities in the country. The trip also included a meeting with Grand Ayatollah Sayyid Ali Husaini Sistani in what was, as far as we know, the first-ever meeting between a pope and a grand ayatollah. Following the meeting, Sistani’s office affirmed “his concern that Christian citizens should live like all Iraqis in peace and security, and with their full constitutional rights.”

Shia Islam, like Islam generally, shies away from official rankings for its clerics, but Sistani is perhaps the most influential ayatollah in the world. Western media correctly highlighted this, along with some of Sistani’s views, to correct the misperception that Iran and Iranian practices are usual and normative for Shi’ism. However, in doing so, the media often imposed Western categories on very different situations.

France 24 states that Najaf, the site of Sistani’s school of Islam, “affirms the separation of religion and politics,” which a glance at his writings shows is simply wrong.” Robin Wright in the New Yorker suggests that “unlike his Shiite brethren in Iran, Sistani distinguishes religion from politics, although he backed a democratic constitution after the fall of Saddam Hussein.” But Sistani backed the constitution, which wasn’t quite that democratic, precisely for religious reasons. Religion and politics do not exist in hermetic isolation.

In an excellent article, New York Times reporters nevertheless state that Sistani is an “extraordinarily influential Shiite cleric who, unlike his Iranian counterparts, believes that religion should not govern the state.” This article also stated that “Ayatollah Sistani believes in a separation between politics and religion—as long as politics does not break Islamic tenets.”

But these two Times statements are very different from each other, and neither is quite accurate. It is simply not true that Sistani believes “that religion should not govern the state” or “in a separation between politics and religion.” More accurately, he believes that politics should “not break Islamic tenets,” in which case the previous two statements must be wrong or very misleading.

For NBC, Hayder al-Khoei draws a distinction between a Najaf school that “believes there should be a separation of church and state” and an Iran-based school “that believes in theocracy.” But if anything muddies the theological-political waters, it is the imposition of church and state language onto Islam. The American word separation—whose meaning within the US is famously murky—is even murkier when applied to another country or a religion without a real equivalent to a church.

Al Khoei is from a distinguished family of Iraqi ayatollahs, and his grandfather was one of Sistani’s teachers. So it is doubtful that this is his preferred language to illuminate Shiite jurisprudence. More likely, he simply seeks some means to help his audience grasp the differences with Iran, even at the cost of distortion.

Sistani certainly does not believe that Shiite scholars should have a direct role in government, but this tells us little about what he does want: his concern lies with the influence of Islam on law and conduct. The confusion is compounded by the habit of referring to Muslim religious authorities as “clergy,” as if they were parallel to Christian priests or pastors.

While noting the difficulty of applying Western terms, even legal ones, we could say that Iraq’s religious authorities are as much judges as they are clergy. Their training is in law more than in theology, as Christians understand it. They learn Islamic jurisprudence and apply it to particular cases, either in a court or through a fatwa (a legal opinion) on, for example, how properly to pray or whether a mortgage is permissible. Sistani’s website illustrates this. As a mujtahid, he examines “the holy Qur’an and the Sunnah of the Holy Prophet… [and] the authorities of law” to determine what the law is. Most of his judgments concern specifically religious questions, such as prayer or hajj, as well as ethical advice on medicine and entertainment. But other decrees, especially concerning women, non-Muslims, and reformist Muslims, directly affect civil status. A non-Muslim cannot inherit from a Muslim, even if he is the father or son, and a Muslim may receive, but not pay, interest to a non-Muslim. Non-Muslims must also pay extra tax if they buy land from a Muslim.

Historically, Islam’s relations to the legislative, executive, and judicial functions of government have often been distinct. In many Muslim settings there has been, in theory at least, no legislative body. Only God, not men, could make laws, and God already laid down laws in the sharia. Bernard Lewis recounts a visit to the British House of Commons in the late eighteenth century by Mirza Abu Talib, a much-traveled man, who, after remarking that the parliamentarians’ antics brought to mind the prating of parrots in India, expressed his astonishment when “it was explained to him that its function and duties included the promulgation of law and the fixing of penalties.” Talib concluded that these poor people, unlike Muslims, did not know the divine law “and were therefore reduced to the expedient of making their own laws.”

Islamic religious authorities themselves would not normally exercise executive power: they are supposed to stick to judging. It was Ayatollah Khomeini’s innovation in Iran that gave the mullahs direct control over the supreme guardianship, the presidency, and all the executive ministries. This change was a radical departure from usual Muslim practice. His principle of velayat-e-faqih, or rule by the supreme religious leader, gave him, and now his successor Ayatollah Ali Khamenei, final say over all government decisions.

Sistani, like most Iraqi Shiites and most Sunnis, rejects this innovation, which is the main reason why the Western media says he wants to keep religion and politics separate. However, this rejection does not mean he accepts that governments could have laws that are contrary to Islam, or that learned ayatollahs such as himself should have no say about the law. He simply wants religious authorities to stick to their judicial role and not, like Khomeini, grab executive power.

The West should avoid imposing its familiar categories on very different situations. Such mistakes hindered the United States’ understanding of Iraq after the Gulf War. Westerners, especially Americans, must break this habit if they want to build on the successes of Francis’ trip.