Iran’s Ballistic Missiles and the Folly of Appeasement

When regime-backed Houthi rebels fired on a base housing US soldiers, Team Biden deflected. 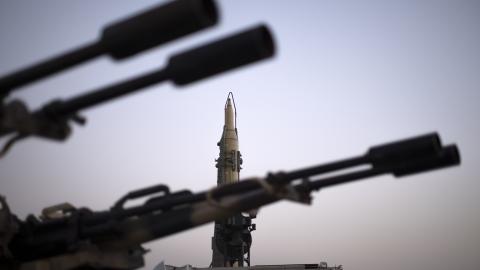 Caption
An Iranian long range surface to surface Qadr missile and an anti-aircraft gun are displayed in a war exhibition organized by the Islamic Revolutionary Guard Corps in a park in southern Tehran to mark the anniversary of the Iran-Iraq war on September 23, 2021. (Morteza Nikoubazl/NurPhoto via Getty Images)

The news that Iran’s contribution to Russia’s war effort in Ukraine will soon include ballistic missiles as well as kamikaze drones has alerted the world to the surprising advances the Islamic Republic has made in disruptive weapons technologies. To the Islamic Revolutionary Guard Corps, these technologies are as important as its nuclear-weapons program.

One man who understands this better than most is Gen. Kenneth F. McKenzie, who retired in April as commander of US Central Command, the military command responsible for the Middle East. Gen. McKenzie recently warned about the impact of Iran’s advances in ballistic missiles, cruise missiles and drones. “Over the past five to seven years, Iranian capabilities . . . have risen to such a degree that now they possess what I would call effective ‘overmatch’ against their neighbors,” he said on October 6 at Policy Exchange, a London think tank. “Overmatch,” he continued, “is a military term that means you have the ability to attack, and the defender won’t be able to mount a successful defense.”