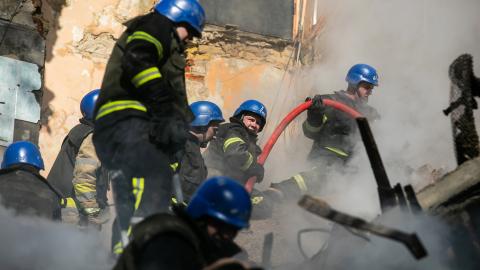 I was in Ukraine last week during a major Russian air strike against the country. Over the skies of the capital Kyiv, four Russian cruise missiles and five Iranian drones were shot down by Ukrainian air defenses. This time, Kyiv got lucky, but other parts of the country did not. In Dnipro, a city about 400 km southeast of the capital, 23 civilians were wounded when a factory was struck during the same attack.

The main target of Russia’s air attacks in recent weeks has been Ukraine’s electrical grid. With winter approaching, Moscow is hoping that Ukrainian civilians will pressure the government to sue for peace if the heating stops working and the electricity remains off. Iranian-made drones are playing a key role in Moscow’s strategy.

But it is not only to Russia that Iran is exporting, or at least considering exporting, its drones. According to Maj. Gen. Yahya Rahim Safavi, a top military aide to Iran’s supreme leader, there are 22 countries around the world — including nations in Europe and Central Asia — that either have Iranian drones in their inventory or want to buy them.

This interest in Iran’s drones should come as no surprise. Most are cheap to make and they are fairly effective. For example, Shahed-136 so-called suicide drones cost a mere $20,000 each. Iranian drones also have a combat record in places like Syria, Iraq and the Gulf. These are attributes that appeal to international buyers.

Tehran is committed to spreading its “revolution” across the Middle East. A key part of doing so has been the proliferation of Iranian drones across the region, mainly to nonstate actors like the Houthis and Hezbollah. However, further afield, Iranian drones have also been wreaking havoc. There are four countries that are either using Iranian drones or hope to do so soon. Policymakers should keep a close eye on them.

First, and most obviously, is Russia. A war in Ukraine that Moscow hoped would have lasted only three days is now entering its 10th month. Stockpiles of Russian ballistic missiles are running low. To compensate, Moscow has turned to Tehran to fill the gap with cheaper, but less effective, drones. Iranian Mohajer-6 drones, designed for a dual reconnaissance and combat role, have already been shot down in Ukraine, offering proof that they are being used.

But the drone of choice for Russia’s recent attacks targeting Ukraine’s electricity grid has been the Shahed-136. To date, dozens of these suicide drones been used against Ukraine. While most have been shot down, the ones that have made it past Ukraine’s air defenses have caused major problems with the electricity grid. To operate and maintain these drones, Iranian soldiers are thought to be in Belarus and Russian-occupied Crimea. With the war in Ukraine having no end in sight and Russia’s drone appetite growing, there is little doubt that Iran will continue playing a major role in the campaign.

The next country to keep an eye on is Russia’s ally Serbia, located in southeast Europe in the Balkans. Serbia has complicated relations with its neighbors, especially Bosnia and Herzegovina and Kosovo. It is by far the biggest military spender in the Balkans and has invested heavily in a drone program. Belgrade has tried to strike a balance between domestically produced drones and drones purchased abroad, predominantly from China. However, Iranian officials recently suggested that Serbia is interested in purchasing their drones.

As Serbia’s relations with the rest of Europe continue to break down over its coziness with Moscow and Beijing, and with relations with neighboring Kosovo becoming dangerously tense, the introduction of Iranian drones to the Balkans would be a significant destabilizing factor.

Another country interested in purchasing Iranian drones is Armenia. Armenia and Azerbaijan have been locked in a decades-long conflict in the South Caucasus over a place called Nagorno-Karabakh. This is a region that the international community considers to be a part of Azerbaijan, but Armenia claims otherwise. In 2020, a war was fought between the two, resulting in Armenia’s defeat and Azerbaijan successfully restoring control over most of the territory that was formerly occupied by Armenia. A main component of Azerbaijan’s success was the use of Turkish and Israeli drones.

Since then, Armenian policymakers have been looking at ways to boost their country’s military capabilities, including with new drones. Considering the cozy relationship Armenia enjoys with Iran, and considering the breakdown in relations between Iran and Azerbaijan, it is highly likely that Armenia wants to purchase drones from Iran — if it has not done so already. Ironically, Armenia and Azerbaijan are probably closer to agreeing to a long-lasting peace treaty than they have ever been before. So, it would be very unfortunate if the introduction of Iranian drones into the conflict derailed the peacemaking efforts.

Iran’s drone diplomacy has also reached deep into Central Asia. Earlier this year, Iran opened its first drone factory overseas in Tajikistan to produce the Ababil-2 drone. The Ababil-2 is capable of both reconnaissance and combat missions. Since the collapse of the Soviet Union in 1991, Tajikistan has been engaged in an on-off conflict with its neighbor Kyrgyzstan over a border dispute that dates back to the time Joseph Stalin drew regional borders in the 1920s. This year, the conflict erupted again, leading to major fighting and hundreds of people killed on both sides. Ethnically Turkic Kyrgyzstan is known to be operating Turkish drones, while ethnically Persian Tajikistan has been using Iranian drones. This illustrates how a country’s preference for drones can sometimes be broken down along ethnic fault lines.

Iran’s recent missile and drone attacks against Kurds in northern Iraq and the oil tanker Pacific Zircon in the Gulf are reminders of Tehran’s destabilizing role in the Middle East. The use of Iranian drones in Ukraine is a reminder that Tehran’s export of instability is not restricted by geography.

It is time that policymakers in the US, Europe and the Middle East started working together to counter this Iranian drone threat before it is too late.