Skip to main content
SVG
Commentary
War on the Rocks 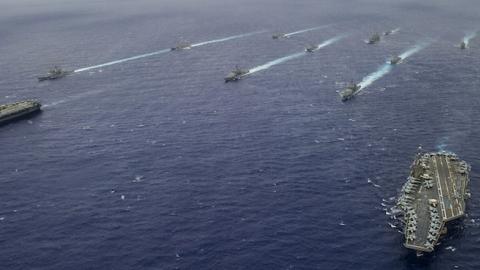 Debates about naval force structure are in the news again, as a number of Republican presidential candidates are calling for a larger fleet, just as Mitt Romney did in 2012. As in 2012, references to having a Navy that is as small as it has been since 1916 are greeted with healthy skepticism, as today’s ships are considerably more capable than those of a century ago. Such skepticism is then countered with the undeniable truth that a ship cannot be in two places at one time, and that our position of world leadership demands naval presence in more places to more effect than was the case in 1916. Both sides have good points.

A more effective justification for a larger Navy — the one Romney used in 2012 and which is being relied upon to some extent by 2016 candidates (Christie, Kasich, Graham, and Rubio, among others) — comes from the report of the National Defense Panel (NDP), a congressionally mandated body constituted to review and provide independent judgment on the work of the Quadrennial Defense Review. Romney highlighted the work of the 2010 NDP, and today’s candidates point to the 2014 NDP Neither of these panels relied on comparisons to the 1916 fleet as a guide to the future. Rather, both looked back to the Clinton-era Bottom-Up Review as a logical tent pole for their recommendations. The logic they applied was fairly simple: The BUR force of 346 ships represented the best judgement available about the fleet size required for our national security at what was arguably the least threatening time in our recent history. In their view, today’s world is at least as dangerous as it was then, and therefore, our current fleet of 273 ships is woefully deficient, as is our planned fleet of 308.

This logic falls flat with some, as they believe the baseline predates most of the precision-guided weapons revolution, and so it provides an inappropriate measure against which to compare today’s fleet. Perhaps, and so as to take this criticism seriously, I offer a similar line of logic extending from a more recent baseline — the year 2007.

Why 2007? Three reasons: First, the 2007 National Defense Authorization Act altered Title X to require 11 aircraft carriers, rather than the previously required 12. Second, the Navy’s 2008 30-Year Shipbuilding plan was submitted to Congress in February 2007, a document that called for a 313-ship Navy. Finally, in October 2007, the sea services released a maritime strategy known as “The Cooperative Strategy for 21st Century Seapower”, a document that specified two “hubs” for forward deployed credible combat power, one in the Western Pacific and one in the Arabian Gulf/Indian Ocean (I led the writing team that produced this document).

Aggregated, these three pieces of evidence provide a guide for the sort of Navy the United States needs to advance its national interests in the post-Cold War world.

Let us compare that to the fleet of today, and the planned fleet. We currently have 10 aircraft carriers in service, which will remain the case until USS FORD (CVN 78) is commissioned next year (the Navy received a waiver from Congress to temporarily deviate from 11). As stated before, the size of the fleet is 273 ships and the latest Navy 30-Year Shipbuilding Plan (meticulously analyzed here submitted in March 2015, has a goal of a 308-ship Navy.

Meanwhile, since the baseline year of 2007, we have seen a continuation of the instability and Islamic radicalism upon which that fleet analysis was based, and added to it, accelerating great power competition with both China and Russia, and increasing instability from Mesopotamia to North Africa. Yet the fleet of today is five ships smaller than the Navy of 2007, and the planned Navy of the future retains that five-ship deficit. Those who point to the possibility of relief from Middle Eastern commitments stemming from the nuclear deal with Iran likely misread the impact of an economically unbound Iran and its capacity to agitate its neighbors.

Quite simply, it is difficult to argue that the Navy of today is better resourced or planned for the 2007 security environment than the 2007 Navy was, let alone for the environment we face today and in the foreseeable future. The Navy continues to respond to demands in the forward combat power hubs articulated in the 2007 strategy, even as the need to return in force to the Mediterranean goes largely unfilled. More to the point, even without a strong Mediterranean presence, average deployment lengths have increased to between eight and nine months — wearing out both ships and crew — and the CENTCOM carrier presence will be gapped for several months this fall.

In summary, presidential candidates of either party who advocate for a larger Navy need not harken back to 1916 or 1993 for relevant comparisons and analytical baselines. The year 2007 works nicely, and supports a straightforward argument for a larger Navy.