Like his predecessors, he hasn’t inspired much confidence in US leadership. 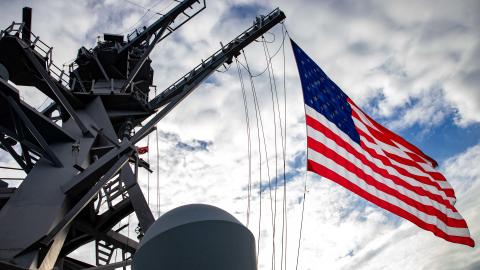 Caption
The Arleigh Burke-class guided-missile destroyer USS Ramage flies the battle ensign during a formation transit as part of the Gerald R. Ford Carrier Strike Group on October 25, 2022, in the Atlantic Ocean. (US Navy photo by Sawyer Connally)

As President Biden’s first term nears its halfway mark, many in the administration feel reasonably good about America’s position in the world. True, hopes of sidelining Russia so that the US could focus on China undisturbed haven’t come to fruition. The expectation that relations with Iran would stabilize with a new administration willing to return to the nuclear deal proved equally wrong. And the president’s signature move—the withdrawal from Afghanistan that Mr. Biden forced through—was executed so poorly that it left a permanent mark on the team’s reputation.

But there is good news, too. Thanks to Vladimir Putin’s war in Ukraine, the North Atlantic Treaty Organization alliance is stronger, more united and viewed as more critical to European security than at any time in the recent past. With Sweden and Finland applying for NATO membership and Germany buying F-35s, the Atlantic security community seems to have recovered its élan.