Biden’s Saudi Visit Was a Win for Americans 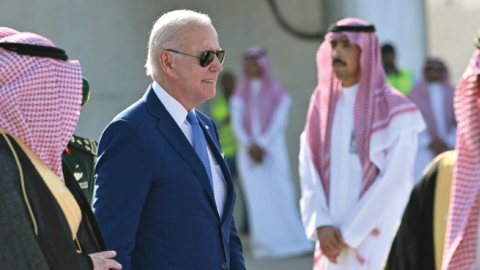 Caption
US President Joe Biden boards Air Force One before departing from King Abdulaziz International Airport in the Saudi city of Jeddah on July 16, 2022. (Photo by MANDEL NGAN/AFP via Getty Images)

n the middle of sky-rocketing inflation and soaring gas prices, President Biden set out to repair fractures with the House of Saud. Hamstrung by his green agenda base of lobbyists and activists, Biden would rather humbly ask the government he called a “pariah” in a debate in 2019 to produce more oil, than back the oil and gas industry in America. Still, the president has been roundly criticized for his decision to go to Saudi Arabia. Not only did he feel pressure to defend the visit, but his team also responded to the critics by touting the president’s concern for human rights in general. Yet a few clarifications and a defense of the decision to repair the relationship are in order.

Firstly, yes, the Kingdom of Saudi Arabia (KSA) is a Muslim monarchical dictatorship with a terrible human rights record. There is no religious toleration there (it is a crime to convert from Islam), there are tens of thousands of political prisoners, women do not have the same legal protections as men, and Riyadh conducts punishments via public floggings and executes capital offenders by beheading. We could go on, but the point is, Saudi Arabia falls short in just about every category that most Americans would agree are important for a just government and society.

But the media focus on the Kingdom of Saudi Arabia’s human rights failures has almost entirely centered on the extrajudicial killing of Saudi citizen Jamal Khashoggi in the Saudi consulate in Turkey. All extrajudicial killings are immoral and unjust—and his murder is no different. Khashoggi was an enemy of the state—not because of his advocacy for the West’s view of free expression and dissent (he embraced political Islam, and even infamously grieved when US special operators killed Osama bin Laden), but rather, his opposition to many of the policies of the Saudi government under the crown prince Muhammed bin Salman, “MBS.” After his murder, media reported that Qatar–a nation friendlier to Iran and hostile to the KSA– was funding and drafting Khashoggi’s published essays. So what generated and sustained the media focus on Khashoggi? He was a Washington Post columnist and his tragic murder became the rallying cry for many journalists and political liberals who already harbored disdain for the oil-rich Saudi Arabia.

Secondly, and crucially, the Kingdom of Saudi Arabia does not seek to harm or undermine the United States of America. As one among the world’s many nations that do not share the United States’ views on just government, due process, religious freedom, and free speech, the Kingdom of Saudi Arabia nevertheless is not an enemy. This is not meant to minimize the complicity of Saudi government officials in the Al-Qaeda attack against America on September 11, 2001, for which they have yet to be held to account. But the fact remains that Saudi Arabia’s chief adversary is Iran, which is also a determined enemy of America and our close ally Israel. Iran is the biggest source of instability in the Middle East, a major illicit weapons distributor, and operates an illegal nuclear weapons program. Furthermore, the Iranian military is responsible for the deaths of US forces in Iraq, and in the last several years has launched missiles at US bases.

The United States works with Saudi Arabia to counter Islamist terrorism across the Middle East and to weaken Iranian power and influence. It is difficult to overstate the importance of the US-Saudi partnership in countering Iran’s weapons flows into the region and its direct attacks against civilians and friendly military forces. This reality does nothing to diminish our disapproval of KSA’s system of government, domestic behavior, or even the way it has conducted some of its strikes in Yemen. But we must take into account all these practical and moral complexities as we consider how to defend and protect innocent Americans and our partners and allies—the moral and Constitutional imperative of our federal government. Indeed, our cooperation with Saudi Arabia gives us greater insight into their behavior and presents more productive opportunities to encourage them towards improvements.

Thirdly, while it is true that the more domestic production of food, energy, and other critical resources the United States possesses, the more insulation we have to weather crises in faraway lands—such as in Russia’s invasion of Ukraine—we still cannot escape the reality that Americans will be impacted by drastic changes to global commodities, especially oil, of which Saudi Arabia remains a primary producer. And furthermore, they are a bulwark against Iran’s aims in Yemen, one of which is to control the contested area along Bab el-Mandeb, one of the world’s crucial oil chokepoints. Almost four million barrels of oil and “refined petroleum products” pass through the Bab el-Mandeb daily to destinations in Europe, Asia, and the United States. The Saudi-led coalition with the United Arab Emirates, to battle Iranian proxies in Yemen deserves US support.

Fourthly, Saudi Arabia will defend themselves against Iranian attacks, and if the United States will not help, they will look to anyone who can help them. Not only does the United States cooperate with the Saudis to counter Iran, the United States is also competing for influence against our primary adversaries in the PRC-Russia axis. The KSA will turn to the People’s Republic of China and Russia for weapons and diplomatic assistance if they think US commitments to their security are faltering.

Some argue that in international affairs, the United States must choose between a values-based approach or an interest-based approach, and that President Biden, by going to Saudi Arabia, has abandoned the former for the latter. This is not true.

Every policy or strategy the US government makes—regardless of who is in office—must take into consideration a complex set of realities about what will strengthen the security of America, defend Americans and our allies, and enable our government to move and act in the world in ways we believe will do the most good. Harming the US-Saudi partnership over any of Saudi’s truly abominable crimes could seriously risk more American lives, cause greater conflict, and increase injustice and human suffering. President Biden was right to go to Saudi Arabia. Now, did the trip go well? It doesn’t seem so, largely in part because the president could not resist trying to placate the journalistic class by raising Khashoggi’s murder; and the visual of the infamous fist-bump conveyed an intimate relationship when what is needed is a business-like one. Alas, at least President Biden and MBS are talking after the Saudi prince’s prior refusal to take the president’s calls. We should be encouraging the Biden administration’s efforts to repair fractures in the relationship—for the good of both US interests and principles.