Build a Fleet, Not a Constituency 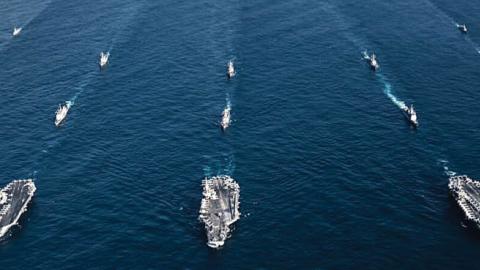 The U.S. Navy’s long-awaited award of a contract to design and build a new class of frigates has brought with it calls to dramatically expand the planned class of 20 ships to a fleet of 70 or more hulls. Like recent congressional efforts to build more of today’s amphibious ships or destroyers, these recommendations risk putting the Navy on an unsustainable path and could fail to influence Chinese or Russian adversaries the U.S. fleet is intended to help deter.
The Navy clearly needs guided-missile frigates. By bringing comparable capability with less capacity, frigates will provide a less expensive alternative to Arleigh Burke destroyers that are the mainstay of today’s U.S. surface fleet. Freed of the requirement to conduct almost every surface combatant operation, destroyers would have more time to catch up on maintenance and training or be available to conduct missions demanding their greater missile capacity like Tomahawk missile strikes or ballistic missile defense.

However, the frigate’s size — less than a destroyer, more than a littoral combat ship or corvette — also limits its ability to support U.S. Navy wartime operations. Frigates like the Franco-Italian FREMM can conduct the full range of European navy operations such as local air defense, maritime security and anti-submarine warfare, or ASW.

But the American FREMM variant will not have enough missile capacity for large or sustained attacks like those conducted by the U.S. Navy during the last several years in the Middle East, or like those that would be likely in a conflict with China. And although they could defend a nearby ship from air attack, the planned U.S. frigates could not carry enough longer-range surface-to-air interceptors to protect U.S. carrier and amphibious groups, or bases and population centers ashore.

Proponents argue frigates’ capacity limitations could be mitigated by buying more of them, better enabling distributed maritime operations and growing naval presence in underserved areas like the Caribbean and Arctic. In a post-COVID-19 employment environment, accelerating frigate construction could also create jobs by starting production at additional shipyards.

Although they cost about $1 billion each to buy, the money to buy more frigates — at least initially — could be carried in the wave of post-pandemic economic recovery spending. But after a few years, that spigot will likely run dry, leaving the Navy to decide whether to continue spending about half the cost of a destroyer for a ship that has only a third as many missiles and cannot conduct several surface warfare missions.

The more significant fiscal challenge with buying more frigates is owning them. Based on equivalent ships, each frigate is likely to cost about $60 million annually to operate, crew and maintain. That is only about 25 percent less than a destroyer. For the U.S. Navy, which is already suffering manning shortages and deferring maintenance, fielding a fleet of 70 frigates in addition to more than 90 cruisers and destroyers will likely be unsustainable.

Instead of simply building more frigates to create jobs and grow the Navy, Department of Defense leaders should determine the overall number and mix of ships it needs and can afford within realistic budget constraints. The secretary of defense recently directed such an effort, which continues despite the impact of the COVID-19 pandemic. This commentary’s authors are participating in the study.

As recommended in a recent study, instead of buying more frigates to expand the fleet’s capacity, the Navy would be better served by adding missile-equipped corvettes like those in European or Asian navies. These ships could carry as many missiles as the Navy’s planned frigate but would not incorporate capabilities for area air defense or ASW. The smaller size and reduced capability of corvettes would reduce their sticker price to about one-third that of a frigate, and their sustainment cost to about a quarter that of destroyers.

The lower price for corvettes would allow more of them to be built and deployed, where they could team with other surface forces to provide additional missile magazines that could be reloaded by rotating corvettes to rear areas. In peacetime, corvettes would enable the Navy to expand presence and maritime security to underserved regions and provide more appropriate platforms for training and cooperation.

Frigates will still be needed, even with a new corvette joining the U.S. fleet. Frigates would replace destroyers in escort operations to protect civilian and noncombatant ships, like supply vessels. They would also conduct maritime security operations in places such as the Persian Gulf or South China Sea, where piracy, trafficking and paramilitary attacks occur. Most importantly, frigates would lead ASW operations, where their towed sonar systems could be more capable than the systems used by current destroyers.

Although ASW is an important naval mission, buying more frigates than planned to expand the Navy’s ASW capacity is unnecessary and counterproductive. The Navy could gain more ASW capacity at lower cost and with less risk to manned ships by complementing its planned 20 frigates with unmanned systems including fixed sonars like SOSUS, deployable sonar systems that sit on the ocean floor, unmanned surface vessels that tow sonars and trail submarines, and unmanned aircraft that can deploy and monitor sonobuoys or attack submarines to suppress their operations or sink them.

The U.S. Navy is at the beginning of a period of dramatic change. New technologies for autonomy, sensing, weapons and networking are enabling new concepts for naval missions at the same time fiscal constraints and pressure from great power competitors are making traditional approaches to naval operations obsolete or unsustainable. The Navy’s frigate award is a great start toward the future fleet, but the Navy needs to take advantage of this opportunity and assess the best mix of ships to field the capabilities it needs within the resources it is likely to have.