China and the United States Are Preparing for War

Michael Pillsbury on the continued probability of confrontation with Beijing. 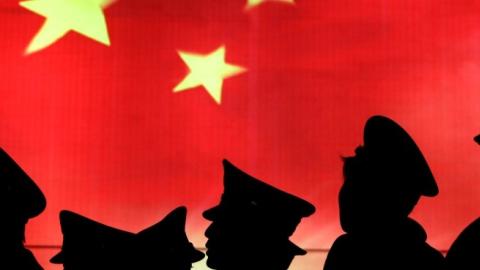 At a Nov. 12 news conference in Beijing, General Secretary of the Communist Party Xi Jinping and U.S. President Barack Obama agreed to notify the other side before major military activities, and to develop a set of rules of behavior for sea and air encounters, in order to avoid military confrontations in Asia. It's incredibly important that we avoid inadvertent escalation," Ben Rhodes, a U.S. deputy national security adviser, "told the Wall Street Journal. An "accidental circumstance," he said, could "lead into something that could precipitate a conflict."

Should we really be worried about war between the United States and China? Yes. Over the last four decades of studying China, I have spoken with hundreds of members of China's military, the People's Liberation Army (PLA), and read countless Chinese military journals and strategy articles. Chinese military and political leaders believe that their country is at the center of American war planning. In other words, Beijing believes that the United States is readying itself for the possibility of a conflict with China -- and that it must prepare for that eventuality.

Tensions are high not just because of Beijing's rapidly expanding military budget, or that the United States continues to commit an increasingly high percentage of its military assets to the Pacific as part of its "rebalance" strategy. Rather, the biggest problem is Chinese opacity. While it's heartening to hear Xi agree to instruct the PLA to be more open with regards to the United States, its doubtful this will lead to any real changes.

Washington is willing to share a substantial amount of military information with China, in order to reduce the chances of miscommunication, misunderstanding or miscalculation," as then U.S. Defense Secretary Robert Gates "said during a Jan. 2011 trip to Beijing. But the Chinese leadership, which benefits from obfuscation and asymmetric tactics, refuses to communicate its military's intentions.

Despite repeated entreaties from American officials, Beijing is unwilling to talk about many key military issues -- like the scope and intentions of its rapid force buildup, development of technologies that could cripple American naval forces in the region, and its military's involvement in cyber attacks against the United States -- that would lower friction between the two sides. And sometimes, as in 2010 after U.S. arms sales to Taiwan, Beijing will break off mil-to-mil contacts altogether -- leading to an especially troubling silence.

As a result, there is a growing mistrust of China among many thoughtful people in the U.S. government. Chinese military officers have complained to me that journals of the American war colleges now feature articles on war with China, and how the United States can win. A February 2014 article, for example, in the U.S. Naval Institute's Proceedings magazine, entitled Deterring the Dragon," "proposes laying offensive underwater mines along China's coast to close China's main ports and destroy its sea lines of communications. The article also suggests sending Special Forces to arm China's restive minorities in the country's vast western regions.

But China is doing the same thing. In 2013, Gen. Peng Guangqian and Gen. Yao Youzhi updated their classic text The Science of Strategy, and called for Beijing to add to the quality and quantity of its nuclear weapons, in order to close the gap between China and both Russia and the United States. Even Xi's "“new model”":http://www.nbr.org/publications/element.aspx?id=650 of great power relations seems to preclude arms control negotiations, requiring the United States to yield to the inevitability of China's rise.

Many people outside the Pentagon may be surprised by just how many senior American officials are worried about a war with China. These include no less than the last U.S. two secretaries of defense, and a former secretary of state. In the concluding chapter of Henry Kissinger's 2011 book, On China, he warns of a World War I-style massive Chinese-American war. "Does history repeat itself?" he asks.

Over at least the last decade, on several occasions the United States has pressed China to be more forthright about its military intentions and capabilities. In April 2006, after a meeting between President George W. Bush, Secretary of Defense Donald Rumsfeld, and Chinese President Hu Jintao, both governments announced the start of talks between the strategic nuclear force commanders on both sides. This move would have been extremely important in demonstrating openness about military intentions. But the PLA dragged its feet, and the talks never started.

Sure, Beijing could follow through on the agreements announced during Obama's recent trip. But I'm skeptical. One of the biggest advantages China has over the United States is the asymmetry of military knowledge. Why would they give that up?