How Taliban Instability is a Risk to Central Asia 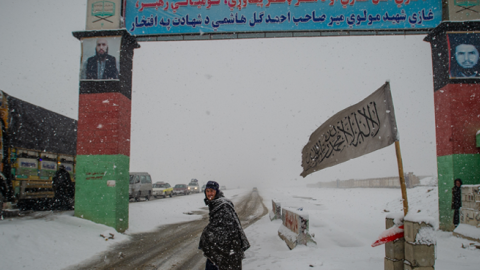 Caption
A man looks on at a snow-covered security checkpoint that marks the entrance to Logar province, beyond the southern gate on January 17, 2022, in Kabul, Afghanistan. (Scott Peterson/Getty Images)

More than a year after taking power, the Taliban are beginning to realize that fighting is far easier than governing. As winter approaches and Afghanistan faces a humanitarian crisis, the government has failed togain international recognition and foreign aid has been reduced to a trickle.

The economic situation remains dire with no prospect of improvement. The Taliban’s problems continue to mount. All these problems are exacerbated by the division inside the Taliban’s own ranks; they are too paralyzed by infighting to govern in any effective way.

The security situation is hardly better. Even though their agreement with the Trump Administration said theTaliban would “prevent any group or individual, including Al-Qaeda, from using the soil of Afghanistan to threaten the security of the United States and its allies,” the Taliban’s takeover has enabled terrorist groups. Daesh has been able to take advantage of the chaos that emerged in some parts of the country when the Afghan state collapsed. Mass casualty terrorist attacks, often aimed at the Shiite Hazara minority, remain common.

Al-Qaeda also benefited from the Taliban’s takeover. According to a recent report by the UN, “Al-Qaeda members reportedly remain in the south and east of Afghanistan, where the group has a historical presence… Al-Qaeda intended to establish a position in northern Afghanistan, mobilize new fighters and generate increased resources.” The report said Al-Qaeda’s leadership “plays an advisory role with the Taliban, and the groups remain close.” Al-Qaeda’s reestablished presence in Afghanistan was best highlighted when its leader, Ayman Al-Zawahiri, was killed in a US drone strike in Kabul in July.

The broader region has also been affected. Weapons from Afghanistan are finding their way to the bazaars in Kashmir. There have been many reports of confrontations between the Taliban and the Pakistani military along the border. Islamabad has legitimate concerns that Kabul is allowing members of Tehreek-e-Taliban Pakistan, a terrorist group with the goal of overthrowing Pakistan’s government, to seek a haven in Afghanistan. The Taliban is suspicious of any role Pakistan might have had in facilitating the American strike against Al-Zawahiri.

With much of the international community’s focus traditionally being on Afghanistan’s southern border with Pakistan, another region to keep an eye on is its northern border. In recent weeks, the security situation near the Afghan-Uzbek border has been deteriorating, despite Tashkent trying to reach out and cooperate with the Taliban. In July, five missiles fired from Afghanistan landed in the Uzbek city of Termez. Last month, a renewed border dispute erupted between the Taliban and Uzbekistan after Afghan civilians from Balk province arrived on Aral Paighambar — an island in the Amu Darya River that serves as the border between Afghanistan and Uzbekistan. Uzbek border guards opened fire, killing and wounding several Afghans. It is not clear which side now controls the island.

Another concern for Tashkent is the Islamic Movement of Uzbekistan. Founded in 1999, the IMU has well-established links to Al-Qaeda and the Taliban, and fought alongside the militants during their takeover of Afghanistan in 2021. Traditionally, the IMU had its base in northern Afghanistan. However, soon after the Taliban were ousted in 2001 the IMU fled south to the porous and remote Afghan-Pakistan border region. In recent years, as the Taliban expanded their presence, the IMU started to back back to its natural habitat in the north. Now, it can operate freely across all of northern Afghanistan.

As the Central Asian country that shares the longest land border with Afghanistan, Tajikistan is also under renewed threat. There has been a history of extremist groups emerging from the region to threaten itssecurity.

Tajikistan’s concerns are not unfounded. The Taliban have handed control of the Tajik-Afghan border to Jamaat-e Ansarullah, which was formed in 2010 and comprises Tajik extremists with the stated goal of overthrowing Tajikistan’s legitimate government. Many Jamaat-e Ansarullah fighters received their training and combat experience in Iraq and Syria. A new group called the Tajikistan Taliban Movement is also operating in northern Afghanistan. While little is known about the group and its links to others such asJamaat-e Ansarullah and the IMU, it opposes “Tajikistan’s secular government.”

Central Asia has a new geopolitical reality on its doorstep. The region is nervously watching how the security situation in Afghanistan develops. As the Taliban allow more nefarious groups to operate in northern Afghanistan, there is a real chance of chaos and terror spilling into Central Asia. This is the last thing the region needs right now.

In the coming months and years, Afghanistan will increasingly become a place of instability, as it was in the 1990s. And just as in the 1990s, neighboring countries in Central Asia will have to decide what role they want to play to bring stability and peace to the region.

Central Asia has been, is, and will continue to be an area of geopolitical importance. Pay attention to Pakistan, but keep an eye on Central Asia too.