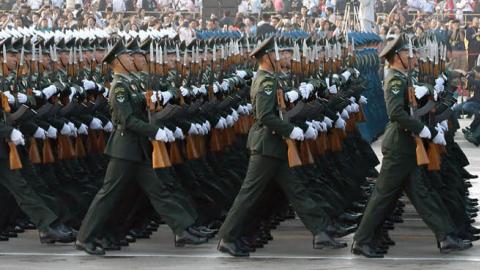 Caption
Chinese soldiers during the rehearsal of the military parade to celebrate the 70th Anniversary of the founding of the People's Republic of China on October 1, 2019 in Beijing, China. (Photo by the Asahi Shimbun via Getty Images)

Deterring Chinese aggression against Taiwan is realistic and must be the commitment of any U.S. leader who refuses to accept American decline. Americans agree,to%20improve%20bases%20in%20the%20Asia%20Pacific%20region that China poses a serious threat to the United States, but there is disagreement about the ways China poses a problem and to what degree we can and should do something about it.

China’s economic coercion, censorship, theft, and pernicious efforts to make America more like China, or at least make Americans of the view that there is nothing wrong with the Chinese Communist way, are meant to help China exert greater influence over U.S. business, trade, speech, religious expression, travel, medicine, etc. The Chinese Communist Party’s (CCP) snuffing out of liberties in Hong Kong and its domestic repression make perfectly clear what the CCP values and what behavior, speech, and thought they reward and punish.

China’s growing influence over U.S. culture, sports, and big business leaders will not simply fizzle out on its own. Stopping Chinese domination will require determined U.S. leadership. To do what, exactly? To untangle our countries’ financial interdependence, to create significant disincentives for Americans to bend to the CCP’s preferences and demands, to reshore critical manufacturing, to revitalize American education in research and technology, and to reassert U.S. sovereignty and promote and defend the American way of life.

So the astute American who appreciates how badly this country needs highly motivated and sustained political leadership to support a renewal in our civic and democratic institutions will also appreciate that this national renewal necessarily includes competing with and at times confronting China.

China’s Influence Due to Size and Military

China has become much more influential in international institutions such as the United Nations and the World Health Organization, in addition to private companies, because of the size of its economy and the strength of its military. China has been amassing a large, precise, and diverse arsenal of missiles and has practiced using them against mockups of U.S. ships and the bases the United States has in the region. China has also built a Navy bigger than ours. It has invested in cutting-edge space and cyberspace technologies.

As China grows in strength militarily and economically, relative to the United States, it grows in its ability to coerce and pressure the United States and our allies. As China scholar Denny Roy summarized in an essay, China’s hegemonic intent is increasingly hard to deny:

Equally obviously, however, Beijing pressures, corrupts and coerces foreign governments to act in support of the Chinese Communist Party’s (CCP) agenda in various ways, including military intimidation, cutting off trade, bribing foreign officials, grey zone activities, harassment in contravention of professional norms, hostage diplomacy, cyberwarfare and collusion with other outlaw governments. The frequent result is Beijing forcing other governments to abandon their preferred course of action – to ‘suffer what they must.’

Where Taiwan Fits in China’s Plan

This brings us to the question of Taiwan. “Unifying” the vibrant democratic and capitalist Taiwanese island to mainland communist China is the CCP’s highest priority. China has been harassing Taiwan incessantly, trying to intimidate and cause to despair its population of 24 million, who have repeatedly voted to remain autonomous and free.

Reasonable and decent people agree that Communist China’s ongoing assault against Taiwan is unjust, and that China is the aggressor against the democratic island that just wants to be left alone. But the first step for the CCP to establish hegemony over Eurasia is to overturn the status quo and to absorb Taiwan — including by military force if necessary.

Adm. Phil Davidson, in his outgoing congressional testimony as head of the Indo-Pacific Command last spring, estimated that China would invade Taiwan in six years. Analysts now refer to this ominous prediction as the “Davidson Window.”

The debate over whether the United States should be concerned over Taiwan’s fate would be more constructive if people knew that successfully deterring Chinese aggression against Taiwan is technically possible. It is. This is not to suggest the steps necessary to deter Chinese aggression are easy; they are not. But the steps are eminently doable, and defeatism is unwarranted.

Deterrence Must Be Sustained

But whatever we are going to do to deter Chinese aggression must begin now and be sustained over the next several years and then for the foreseeable future. Presumably Chinese leaders have not attempted to forcibly occupy Taiwan up until this point because they are not confident that the cost would be worth the gain.

The job before the United States is to make sure they continue to draw this conclusion. Broadly, this will require the United States to lead a coalition (the Aussies and Japanese are on board) to credibly convince the Chinese that we would prevent China from getting across the 80 miles of ocean to the Taiwan Strait before it could launch a full-scale invasion.

First, arm and cooperate heavily with our allies. This includes Taiwan, whose officials and public opinion polls repeatedly show have the will to fight off CCP invaders. Taiwanese polling data over the past several years emphatically shows a willingness of the people of Taiwan to fight (almost 80 percent in a recent poll ) despite CCP disinformation to convey the opposite.

Importantly, a leading Taiwanese analyst noted: “the more supportive the United States appears, the more confident the people are; when the United States is less supportive, the people then lean toward China.” But they need to spend a lot more money on their defense and they must buy the right kinds of weapon systems necessary to pose an asymmetrical threat. We should insist they do so, privately.

There are other good conversations going on now to collaborate with allies for “capacity building,” for example, stockpiling munitions in and with Japan. But Japan should also buy from the United States and field a long-range strike capability. That’s still politically fraught in Japan, but less than it used to be, as Japan stares down the proverbial barrel of a CCP gun.

Good things are happening without the United States, too, but our steady hand in the region is undoubtedly needed. (Japanese warships have cooperated with Taiwanese warships to get Chinese ships to back off Taiwan.) There is also considerable potential for basing Unmanned Aerial Systems in the nearby Japanese and Philippine islands and Guam with relatively small landing strips. Unmanned Aerial Systems with long-range strike missiles could be formidable against transport ships, for example.

Second, the United States must prepare to withstand and then prevail in a Chinese-initiated missile attack. This means working on defenses to limit the damage of an attack and deploy offensive weapons to respond with formidable combat power. This requires hardening U.S. assets with passive and active defenses.

The good news is we can get started on this now if we do not permit bureaucratic inertia to get in the way. We don’t need more government reports to tell us it would be extremely good to put a robust (not impenetrable!) missile defense architecture that includes the full spectrum of already developed missile defense systems on the U.S. territory Guam.

Guam will be critical for any U.S. effort to maintain a free and open Indo-Pacific and to prevent China from dominating it. It also means investing in new technologies like hypersonic weapons and defenses and the attendant sensor and tracking architecture. Some of this good work is underway but it needs to move faster. Our testing programs should also move faster and more obviously demonstrate a real-world ability against a Chinese attack. It also means investing in underwater warfare capabilities — submarines, submarines, submarines.

Third, the United States must revitalize and update our nuclear deterrence so it disabuses a potentially dangerous Chinese misunderstanding that it would be wise to use a low-yield nuclear weapon against U.S. forces. Well-meaning idealists might wish that nuclear weapons and their deterrent impact have no role in contemporary geopolitics. But our adversaries do not share that wish. In 2017, China announced its intention to build a “world-class military by the middle of the century.”

Because the United States has not invested in theater-range nuclear weapons, China has exploited this. As Dr. Christopher Yeaw, who was the chief scientist of Air Force Global Strike Command (AFGSC)and the Department of Energy’s lead official in the development and rollout of the 2018 Trump administration Nuclear Posture Review , has written:

__In these wargames, adversary crossing of the nuclear threshold has been deemed by players as quite credible, given the paucity of reciprocal US deterrent capabilities and the minimized collateral damage afforded by such adversarial employment. US players have found response options to be uncomfortably insufficient or even non-credible, largely because of a paucity of sufficient prompt, assured, proportional NSNW capability.__

To bolster deterrence in the China context, we should address the paucity and we should be fully modernizing and adapting U.S. nuclear deterrence — not weakening, restricting, or shrinking it.

China has imperialistic ambitions, and it is naïve to insist it is not so. But, like the United States, it also has problems. We should not permit defeatism to reign, thereby surrendering the next century to one where Chinese Communism is the most influential global power.

China’s pandemic-spreading, bullying, coercion, lying, and opacity generally, but especially during the last two years, has seriously harmed its global reputation and galvanized U.S.-led coalitions opposing it. We have ample reason to be encouraged that we can exploit China’s weaknesses while keeping clear eyes to the threat and necessary moves to fight for American preeminence.

The goal for the United States must be to prevent a war with China and to fight for American sovereignty. The goal is to deter aggression that could lead to further escalation. If deterrence fails, we should be prepared to outmaneuver and out-muscle China to cause them to back down.

War is always a tragic outcome — but it is sometimes not the worst outcome. We could simply let the Chinese Communists take democratic Taiwan and the rest of Eurasia while we focus on worthy domestic debates and crises at home; and when we are finished with those domestic fights, we will look up to see that our country is at the mercy of Xi Jinping’s Chinese Communism. It is not a good trade.

We can successfully take on our domestic challenges while deterring CCP domination, and in doing so, preserve and strengthen American security and the American way of life — and we must.

Read in The Federalist