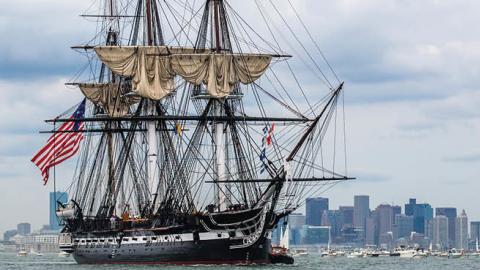 Caption
The USS Constitution set sail for the first time since 1997 in Boston Harbor. (Photo by Aram Boghosian for The Boston Globe via Getty Images)

Speculation about President Biden’s defense budget began before his election. With broadening military challenges from China, Russia, and Iran, the question is vital: On 8 February, Russia’s state-run news agency quoted Moscow’s ambassador to Iran, Levan Dzhagaryan who announced that China, Russia, and Iran would hold multilateral naval exercises in the Indian Ocean. The exercises are a small sign that the budget, size, design, and training of U.S. military forces are more important today than at any time since the Cold War’s end 30 years ago. No less fundamental is the character of the U.S. armed forces.

The U.S. military’s institutional inertia is notorious. After the Soviet Union’s collapse, the U.S. military lacked an overarching strategic concept. The Gulf War’s apparent lessons — “jointness”, precision strike, and the primacy of airpower — were pressed into service. And the military has atrophied. It adapted out of necessity to a decade of counterinsurgency operations. But operational competence is no substitute for strategic clarity. Discussion of “uncertainty” and “danger,” vague terms used to preclude concrete identification of future adversaries and logical explication of strategy, force structure, and doctrine, defined theoretical debate and service discussion.

However, a paradigm shift has occurred over the past four years. The COVID-19 Pandemic has only confirmed that China is a hostile, predatory power, willing to manipulate, bully, and bribe in equal measure to achieve its objectives. And its objectives are increasingly clear. At a minimum, China wishes to conquer Taiwan, humble Japan, Vietnam, the Philippines, and India, and become the predominant power in the Western Pacific.

China plans to achieve at least a portion of its objective through force. To secure American security, economic, and great power interests, the U.S. military must therefore prepare to fight a shooting war with a nuclear-armed adversary. Using such expressions as “great-power competition” or “strategic rivalry” helps shape the problem but are not substitutes for the strategy needed to win great power competition.

The critical service in this conflict is the U.S. Navy. This stems from geography and likely American strategy. China’s objectives in the main are not physical or territorial. But controlling the chokepoints that provide access to the Indo-Pacific requires China to project power over significant distances, almost entirely by sea. Moreover, China’s territorial objectives that would facilitate these goals are various specific islands, most notably Taiwan, but also locations claimed by Japan, Vietnam, and the Philippines.

Hostilities between the U.S. and China would be a sea war in the truest sense: victory at sea will have a decisive impact upon the outcome. Additionally, if the U.S. hopes to leverage allied capabilities, it must control the maritime route between the Euro-Atlantic and Indo-Pacific, both through the Suez and the Panama Canals. This will require not only control of international chokepoints, but also a fleet large and diverse enough to protect allied shipping and neutralize Chinese submarines that leak out beyond the Second Island Chain.

Strategy, however, is only half the issue. A military force is comprised of individuals — soldiers, sailors, airmen — each of whom must be ready to perform difficult tasks under extreme pressure. Their officers must do the same, from ensigns and second lieutenants to generals and admirals.

Officers in command during peacetime typically are replaced during war. Once again, modern militaries are bureaucratic institutions with rigid promotion processes. Professional advancement requires military competence. But particularly when approaching flag or general officer, bureaucratic requirements increase. The modern force includes internal service promotional requirements, for example serving with an armored unit as a light infantry Army officer. Jointness has added its own requirements: Specifically “joint professional military education” and the need to serve in joint billets, typically on a joint staff. Many officers who ascend through this system are talented commanders. Nevertheless, it is undeniable that a bureaucracy like the military will perpetuate itself institutionally by creating promotional mechanisms that encourage bureaucratic skill, rather than command talent or strategic understanding.

History proves it. It took Abraham Lincoln nearly three years of war to find “his man,” General Ulysses S Grant. In turn, Grant papered over clear deficiencies in the Federal command structure. Major General George Gordon Meade, the victor of Gettysburg, was a competent officer whose courage was never in doubt. But he lacked the operational understanding — and perhaps the willingness to accept large casualties — that made Grant so effective. Similarly, William Tecumseh Sherman, “Uncle Billy,” was apart from Grant the only commander who grasped the operational level of war. But he left command following a nervous breakdown in 1861, and only returned to service because of Grant’s personal support. Winston Churchill sacked Home Fleet commander, Admiral Sir George Callaghan, replacing him with First Lord Jacky Fisher’s hand-picked choice, Admiral John Jellicoe. We will never know Callaghan’s capability for command. But we do know Jellicoe’s fighting talent. With limited information of the German High Seas Fleet, Jellicoe nevertheless acted decisively, deploying the Grand Fleet into its battle line, and thereby crossing the German “T”.

The US Navy between 1870 and 1945 is another example of success that stemmed from service culture. By 1907, the Navy had developed and tested a naval doctrine fit for great-power conflict. By 1918, it had deployed both battleships and destroyers overseas, gaining experience in convoying and anti-submarine warfare that would prove invaluable during the Second World War. Despite treaty restrictions and growing public opposition to the military, the services tested new technologies, modified tactical dispositions, and developed strategies and operational concepts that descended deductively from German and Japanese capabilities and interests. If it had taken Franklin Roosevelt’s administration three years to identify competent admirals, the U.S. would have lost the Second World War, its Navy savaged by a very competent Japanese adversary. In the event, the Navy had multiple talented commanders and strategists, one of whom, the victor of Midway Admiral Raymond Spruance, had no firsthand air combat experience.

Since the retirement of the USS Simpson in 2015, the only ship in the US Navy to have sunk an adversary in combat is the 227-year-old USS Constitution. A war with China will be a sea war. The Navy must prepare to fight that sea war. This requires emphasizes training officers to fight, not serving on joint staffs; rewarding rather than penalizing commanding officers who rigorously insist on training for long periods of intense combat; developing commanders able to win fleet engagements larger than any in over seventy years; and the strategic thinking to which everything else, from fleet design to technology, to shipbuilding and training, is subordinate.