Pull the Plug on the Taliban Talks 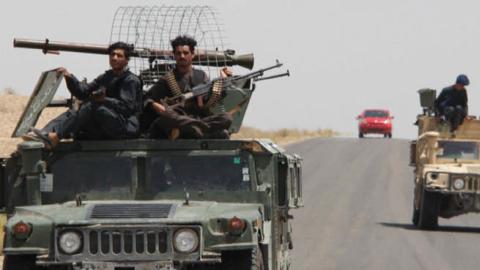 Caption
Afghan security officials patrolled a highway in the southern province of Helmand in August. The province is a Taliban stronghold.

The Trump administration’s efforts to end the war in Afghanistan by negotiating with the Taliban seem to have hit an impasse. Even after the release of 5,000 Taliban prisoners and the U.S. adhering to its withdrawal timetable, the Taliban refuse to commit to a ceasefire.

Many Taliban recently freed from prison have returned to the battlefield. In violation of their deal with the U.S. government, the Taliban have so far not broken their ties with al Qaeda, and have continued to target Americans as well as Afghans. Given the Taliban’s behavior, this might be the time to suspend talks with them. Suspension of talks would recalibrate the perception that the U.S. is so eager to withdraw from Afghanistan that it does not care if the Taliban return to power.

Such recalibration is necessary to force the Taliban into keeping their word. It would also signal to Pakistan that it must threaten the Taliban with loss of sanctuary to get them to end the fighting.

The U.S. negotiating strategy of giving in to Taliban demands upfront have made them more, not less, intransigent. It is now apparent that the U.S. and Taliban visions of peace are very different. Americans want bloodshed in Afghanistan to end, while the Taliban define their victory as the beginning of peace.

The Taliban joined the talks to encourage withdrawal of NATO forces while they waited to restore their Islamic emirate dismantled in the aftermath of 9/11. For Pakistan, the talks were a way to ensure that its proteges would control Kabul without facing further fallout from a war next door.

For years Pakistan denied overwhelming evidence that it supported the Taliban or hosted its leadership. President Trump’s willingness to talk to the Taliban gave Pakistan an opportunity to normalize relations with the U.S., moving beyond arguments about its “ double game ” in Afghanistan.

The administration’s pragmatic decision to cut a deal with the Taliban involved not only ignoring the Taliban’s totalitarian ideology; it also required forgiving Pakistan’s role in helping the Taliban prolong the war, costing American lives and treasure.

It might have been worth the price if the talks led to a peace settlement. But it seems that the Taliban are not content with ending war and being accommodated within Afghanistan’s power structure. They want absolute power and insist on imposing their version of Islamic law on the Afghan people.

Just five days after signing the Doha agreement with the U.S., the Taliban issued a religious ruling (fatwa on March 5, asserting that its amir, Mullah Haibatullah Akhundzada, was the “lawful ruler” of Afghanistan and head of its “Islamic government.”

Such statements have not encouraged the Afghan government and others committed to Afghanistan’s democratic constitution in their own negotiations with the Taliban.

The Taliban’s obduracy stems from their assessment that the U.S. decision to withdraw from Afghanistan is irreversible. They also see political divisions in Kabul as an advantage. Once American troops have left, the Taliban expect to ruthlessly wipe out any resistance to their ideology.

Meanwhile, having facilitated direct talks between American representatives and Taliban leaders, Pakistan feels it is now off the hook for its past conduct. Pakistan would like the U.S. to persist with talks even if they do not lead anywhere while refusing to pressure the Taliban towards compromise. Pakistani officials also claim that Pakistan has lost influence over the Taliban.

The fact remains that Taliban leaders travel for talks in Doha from Pakistan and the families of most of them live in Qatar or Pakistan. The U.S. can insist that Pakistan (and Qatar) should go beyond pretending to be just gracious hosts and use the threat of expulsion of Taliban leaders if they do not accept conditions for a negotiated settlement.

The U.S. needs to make it clear that its desire to get out of endless wars does not reflect desperation and willingness to pay any price for withdrawal of its forces. Leaving Afghanistan to be run over by the Taliban would not be in America’s interest, especially when China is expanding its investment in the region and could emerge as the region’s dominant power.

Suspending talks until the Taliban show greater flexibility could prompt Pakistan to twist the Taliban’s arm. China (which may have its own reasons to fear a Taliban return to power) would also take future negotiations on Afghanistan more seriously if they do not reflect American impatience to withdraw.