Retiring the USS Harry S. Truman Is a Terrible Idea 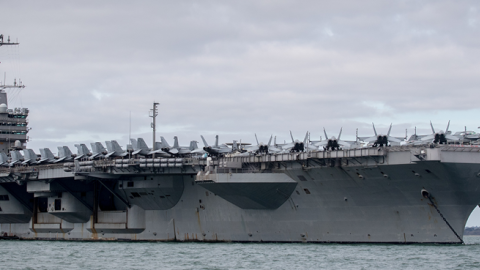 Caption
The US warship USS Harry S. Truman is pictured anchored in The Solent on October 8, 2018 near Portsmouth, England. (Matt Cardy/Getty Images)

p(firstLetter). The Pentagon wants to reduce the Navy’s carrier fleet. In testimony before the House Armed Services Committee on March 26, Acting Secretary of Defense Patrick Shanahan said that aircraft carriers remain “vital” to the United States’ security. Shanahan also insisted that a carrier, the USS Harry S. Truman, which needs refueling for its nuclear reactor so that it can stay in the U.S. fleet for another 25 years, should be tied up to save money for the “future force.” The two assertions are contradictory. “Future force” includes unmanned planes that would fly from carrier decks. Laying up the Truman would reduce the carrier fleet below its congressionally mandated level of eleven, which U.S. combatant commanders say is insufficient to meet their requirements. Cutting the carrier force would undercut the rationale for investing in future technology — for example, unmanned planes.

The large problem is that the military service best suited to deter China’s regional and global ambitions — the U.S. Navy — is not being funded at a level commensurate with the reemergence of great-power competition. The U.S. needs both enough ships to meet its global commitments and advanced technology to equip them. Cutting either to fund the other is like giving up your health insurance to replace a leaking roof.

Arguments for retiring the Truman stand up neither to facts nor to reason. The cost savings from failing to refuel the Truman in the fiscal year that begins this October would be no more than $17 million. Greater savings would accrue in later years. They amount, in constant dollars, to less than 75 percent of the Truman’s original cost — a lot of money, but worth it to keep the carrier fleet at the absolute minimum needed to meet the U.S.’s peacetime commitments in the Middle East and Indo-Pacific.

Another ailment to which Pentagon leadership has succumbed is the selectively applied notion that large deck ships are particularly vulnerable to Chinese missiles, whose unproven capability is believed to threaten aircraft carriers and large amphibious ships underway at sea as far as 2,500 miles distant. “Selectively applied” is an appropriate description because Pentagon leadership has also agreed to buy two Ford-class aircraft carriers to be built simultaneously, thereby saving $4 billion dollars. This is a good deal for which the Pentagon deserves credit, but is the Truman more vulnerable than the two future carriers?

No argument exists to support that it is. The Navy already possesses late-model missiles that can defend against cruise and ballistic missiles. The U.S. Air Force long since demonstrated its ability to launch intermediate-range ballistic missiles at land targets from the air. This ability can be updated to threaten Chinese anti-ship missile batteries. A straightforward answer to Chinese missiles, as they present an increasing threat to ships underway at sea, is to invest in unmanned aerial vehicles whose range is much greater than that of manned aircraft and then to change the composition of planes aboard aircraft carriers so that they can launch strikes out of range of China’s missiles. That investment should not be made at the expense of a ship that can carry new unmanned combat aircraft. In any event, the back-and-forth of new weapons answered by newer ones does not end with China’s anti-ship missiles.

No less important, the Navy has been experiencing serious problems with repairs, maintenance, and training because of growing demands on its fleet. Former Pacific Command commander Admiral Sam Locklear told the House Armed Services Committee five years ago that the U.S. Central and Pacific Commands could not meet their obligations with the eleven existing carriers. Tying up the Truman would cut the number of carriers to ten, from its congressionally mandated requirement of eleven. It would idle shipyard workers whose skills cannot be turned on and off like a fan, thereby further harming the U.S.’s industrial base. It would nullify President Trump’s promise to expand the Navy to include “having the twelve-carrier Navy we need.”

The threatened aircraft carrier’s namesake, Harry S. Truman, was a self-taught historian who once observed that “there is nothing new in the world except the history that you do not know.” The lesson on which American defense planners have lost their grip is that weakness, in this case the diminished ability to bring powerful forces to bear swiftly, is an invitation to bad behavior from a foe. China insists that taking Taiwan by force remains an option and continues to increase the amphibious fleet required for that objective, along with its aggressive deployments of air and naval forces around Taiwan. Reducing the U.S. carrier fleet today is like lighting a campfire in a drought-stricken forest.

But the bottom line here is the defense budget’s bottom line. This administration’s defense-budget increases are prudent and necessary but insufficient. They will help end the unreadiness that the previous administration’s defense cuts created. They will not build up the U.S. military at the rate needed to address the re-emergent great-power competition that the Trump administration correctly identifies. Achieving the Trump administration’s original goal of a twelve-carrier fleet would require building a new aircraft carrier every three years. At that rate, Navy could have a twelve-carrier fleet by 2030 — at the earliest. (Many of the existing eleven carriers would be retired as new ones come on line.) The Defense Department has no plan for this.

The administration’s budgets will not substantially ameliorate what the 2017 congressionally mandated commission on the national-defense strategy identified as “a crisis of national security for the United States” that is “undermining deterrence of U.S. adversaries and the confidence of American allies, thus increasing the likelihood of conflict.” They will not reverse what the current commander of the U.S. Indo-Pacific Command, Admiral Phil Davidson, told the Senate Armed Services Committee in April last year: that “there is no guarantee that the U.S. would win a future conflict with China.” Of course, there is no guarantee of anything in a conflict, but this statement by the officer responsible for American forces in the Indo-Pacific is a powerful warning against the less capable Navy that the U.S. will have if USS Truman leaves the fleet.

The most apt parallel to our current situation is the one that Britain faced in the 1930s. China should not be compared to Nazi Germany, but the responses of British and American leadership to strategic danger bear examination. Up until it was too late to deter war, the British political class saw appeasement as an acceptable answer to Hitler’s increasing aggression. They dismissed the idea that Britain was in a political struggle with Germany. Accede enough and the Germans will be satisfied, they thought. This is parallel to our decades-long hope that integrating China into the global economic system would make Chinese leadership “stakeholders” in the world order. Appeasing Germany failed for Britain. Using inclusion to moderate China has failed for us.

Comparisons between Britain’s experience and our policy today do not stop here. Today’s perception is that the British sat on their hands as Germany armed. This misses the mark. After dipping slightly between 1930 and 1933, the U.K.’s defense budget increased by 128.8 percent from 1934 to 1939, the year that World War II began. Winston Churchill’s reviled trio of British leaders, Ramsay MacDonald, Stanley Baldwin, and Neville Chamberlain, held the premiership during that five-year military buildup during which the defense budget increased by an average of 29.9 percent per year. It was not enough. The Germans seized the continent, drove the British off it, and inflicted devastation on London and other major cities.

Our increases in naval expenditures are less impressive than those of Britain in the 1930s. Measured in constant dollars, the U.S. Navy’s budget in 2008 was $162.7 billion dollars. One decade later, the Navy’s budget was $172.9 billion dollars. This is an annual growth rate of 1.02 percent. It compares unfavorably with Britain’s large defense increases that Churchill rightfully criticized as inadequate to defend against the arms buildup that accelerated as Berlin openly violated the Versailles Treaty’s proscription against German rearmament after 1933.

If there is a conflict between the U.S. and China, it will be waged at sea. China’s naval buildup began in earnest in 2000. Eleven years ago, the People’s Liberation Army Navy (PLAN) started to deploy guided-missile frigates and logistics ships to the waters off the Horn of Africa — a demonstration, which has been repeated dozens of times since, of Beijing’s ability to dispatch and supply naval forces at great distance from their base. The Pentagon’s unwillingness to refuel the USS Truman so that it can fund new and indispensable technologies to offset Chinese competition is a symptom of the U.S.’s failure to take Beijing’s ambitions seriously — both in dollars and in strategy. Decommissioning an aircraft carrier, one with a quarter century of life left, to pay for new technology is an unforced error, an exercise in strategic malfeasance. Keep the Truman and pay for the weapons to deter or, if need be, defeat China.