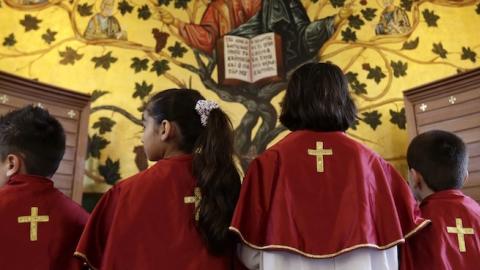 Caption
Iraqi Christian children, who fled the violence in the Nineveh province, attend a mass with their mothers at a chuch in Dekwaneh, east of the Lebanese capital Beirut on March 21, 2015. (ANWAR AMRO/AFP/Getty Images)

Publications and videos by ISIS repeatedly assert its intent to destroy the Christian church—that is, all Christians under its control—and its pattern of attacks evidences such intent. Nevertheless, ISIS claims to offer Christians in some areas of its self-proclaimed caliphate an option to pay a traditional Islamic tax, or jizya, as an alternative to death, deportation, and forcible conversion. Superficially, ISIS may appear to have revived the medieval Islamic practice that provided limited toleration for the Jewish and Christian “People of the Book” and that was formally abandoned over a century and a half ago under the last Ottoman caliphate. Closer examination of all three cases where jizya was claimed to have been offered as an option, however, reveals that these ISIS claims are a deception or propaganda ploy. ISIS does not tolerate Christians. Its demands for payments from Christians, which it calls jizya, are actually extortion and ransom. ISIS has never given a traditional jizya option to any of these Christians at any time. Even when it extorts payments and calls them jizya, this always, within a short time, results in dispossession, rape, murder, kidnapping, and enslavement of Christians—all acts evidencing the crime of genocide.

Genocide is a crime of intent, one that requires the deliberate aim of destroying a group, such as a religious one, “in whole or in part.” In a recent report, the Independent Commission of Inquiry on the Syrian Arab Republic (a body created by the UN Human Rights Council) denies that ISIS intends to destroy the Nineveh Christian community. It points to ISIS claims to offer a jizya option while overlooking contrary evidence, including other ISIS declarations, such as, “We will conquer your Rome, break your crosses, and enslave your women.” It makes a summary conclusion, without citing any supporting evidence, that ISIS recognizes the “right to exist as Christians,” including for those within its territory, “as long as they pay the jizya tax.” The Commission’s conclusion is demonstrably false.

In the American debate leading up to the U.S. government’s designation of genocide, the issue of jizya first came to be a central rationale for those within and outside the Obama administration who argued that Christians should be excluded from the designation. Based on unsupported claims that jizya arrangements were being implemented, some erroneously concluded that ISIS lacks the intent— required by the international Genocide Convention—to destroy the Iraqi and Syrian Christian community. Their argument, which ultimately did not prevail in the U.S. State Department’s genocide designation decision, depended on taking selective ISIS assertions about jizya at face value; ignoring the evidence in the purported cases of jizya; overlooking the obligations of the Islamic authorities under traditional jizya theory and assuming that ISIS adheres to traditional Islamic rules and practices; and assuming that ISIS can be trusted to honor its agreements with non-Muslims.

This report agrees with the official determination of the U.S. secretary of state and the resolutions of Congress that the Christians of Nineveh and of those areas of Syria under ISIS control have been among the religious minority groups facing ISIS genocide.