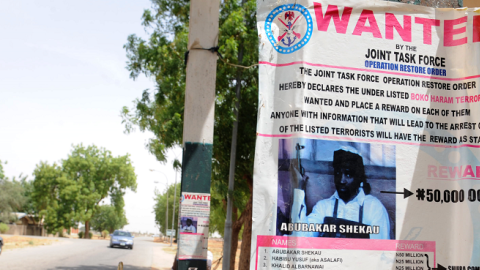 A news article in today’s New York Times sets out to explore why the United States waited until November 2013 to designate Nigeria’s Boko Haram as a “foreign terrorist organization.” In light of the group’s latest atrocity--the kidnapping and enslaving of over 200 schoolgirls in Nigeria’s Borno state last month--this is a very good question.

The article makes the point that the terrorist designation was made after Hillary Clinton resigned as secretary of state, and confirms reporting that it came after a two-year debate in which “the Justice Department, the F.B.I., American intelligence officials and counterterrorism officials in the State Department” all called for the designation but State ultimately opposed it.

Clinton’s then–assistant secretary for African affairs, Johnny Carson, tells the Times that State opposed the designation for “for six or seven different reasons,” which boil down to an equal measure of fear of the effect on Boko Haram, possibly making it seem more important and popular, and wariness of legitimizing a Nigerian government crackdown. State counterterrorism official Daniel Benjamin essentially gives a “what difference does it make?” shrug, stating: “Designation was one of many tools and not the most urgently needed one in dealing with the Nigerians. ”

That ends the article’s probe. But a review of the State Department’s actual statements from that era would have revealed a flawed official analysis of the situation that is more disturbing.

In 2012, the State Department was declaring that Boko Haram was motivated not by Islamic extremism, but by anger at “poor government service delivery” and “poverty” generally. Its policy was to actively oppose Nigerian military involvement and support greater American aid and investment to the country, particularly to the areas giving rise to Boko Haram militants.

__The day after [an Easter Sunday] Nigeria church bombing, at a forum on U.S. policy toward Nigeria held at Washington’s Center for Strategic and International Studies, Clinton’s Assistant Secretary of State for African Affairs Johnnie Carson overlooking Boko Haram’s self-proclaimed identity, pattern of behavior, statements and very name, which means “Western education is a sin,” publicly denied that Boko Haram has religious motives. He went out of his way to stress: “Religion is not driving extremist violence in . . . northern Nigeria.Carson is articulating official U.S. policy. Its theory is that Boko Haram is “exploiting religious differences” to “create chaos” to protest “poor government service delivery,” poverty, and a variety of good-governance concerns.__

The State Department attributed the phenomenon of Boko Haram to the poverty and low levels of literacy in the north, rather than the other way around. Briefing an audience that was specifically interested in strategic insights, he described the U.S. policies then in place for Nigeria, As Carson itemized:

__We have provided technical assistance to support reform in the power sector. We have taken a large energy trade mission to the country, and encouraged the swift passage of a strong petroleum industry bill that brings more transparency to the sector. We have recognized the importance of Nigeria’s agriculture sector and supported Nigeria’s comprehensive agriculture development plans. And in the health sector, we have committed over $500 million a year to the President’s Emergency Plan for AIDS Relief, demonstrating how critical we consider Nigeria in the worldwide fight against HIV and AIDS.__

All the programs Carson specifically named were directed to economic and health development, some of which may have actually created financial incentives for more Boko Haram violence. He stressed this was important “particularly in the disadvantaged North of Nigeria where Boko Haram finds support.” Carson made a point of stating that U.S. policy was to press Nigeria to “de-emphasize the role of the military.” (All of this could have been scripted from the MoveOn.org petition campaign on Nigeria at the time.)

The U.S. State Department’s delay in giving “terrorist” designation to Boko Haram had real policy consequences. It helped the Obama campaign narrative that al-Qaeda was on the run. But it didn’t help Nigeria, whose girls and boys, men and women, Christians and Muslims are now paying with their lives and living in dread of a larger, more powerful Boko Haram.