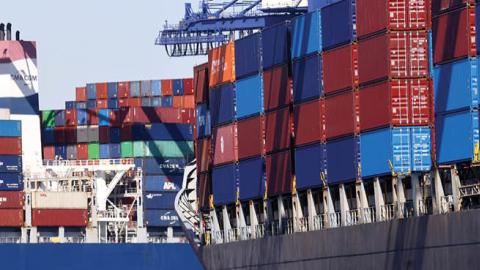 Indeed, confrontation is increasingly imaginable, as China’s recent 150-aircraft violation of Taiwanese airspace indicates. A cross-strait conflict necessarily would involve the U.S. and its Pacific allies, and potentially regional rivals, including Vietnam and India. Given the sheer volume of global trade that transits the Indo-Pacific, a conflict would trigger a global depression unlikely to end until a systemic political realignment, much like the Great Depression of the 1930s.

However, nations fight if needs must, and the time may be past to avoid a confrontation. Yet for the careful observer, the current shipping crisis demonstrates the manifest inadequacy of the American merchant fleet for U.S. strategic needs.

The United States is modifying its combat forces to counter China’s likely strategy and force structure. Long-range missiles distributed to all military branches; smaller, heavily armed warships; and unmanned air, surface, and subsurface vehicles are each a part of this solution. But in any conflict lasting longer than hours to days, U.S. forces will need to be resupplied with, once again, the materiel needed to fight a great-power war.

In turn, this requires a fleet capable of conducting resupply. The most efficient means for moving any bulk — cargo, military or otherwise — is by ship. Thus, the U.S. requires an additional fleet to its current combat fleet, comprised of high-volume civilian cargo ships repurposed for military service and naval ships purpose-built for operational resupply and combat replenishment.

The U.S. Navy’s Military Sealift Command operates about 130 ships, grouped into combat logistics: fleet oilers and replenishment; fleet support, submarine, special warfare, radar, and other ships; and combatant command support — large merchant-style vessels designed to transport major quantities of ammunition to combat theaters. Yet this fleet alone is insufficient to support US forces in a high-end conflict. It will experience combat losses to enemy missiles and submarines, and even absent them, is too small to meet military needs without civilian assistance.

Civilian assistance is far from certain. In 2019, the U.S. merchant fleet was comprised of 182 ships, fewer than half of a percent of global merchant hulls. The overwhelming majority of American goods use foreign-flagged ships whose reliability for military use is uncertain. The U.S. encountered this situation during the Second World War, building 5,777 cargo ships in response.

Even American-flagged ships may not be available for combat use. Federal law mandates intra-U.S. trade be carried on U.S.-flagged ships, meaning a portion of the American merchant fleet will be needed for traditional civilian tasks.

The military would turn to the Ready Reserve Force, a component of the National Defense Reserve Fleet, to make up this shortfall. The RRF’s 46 ships, distributed across the U.S., notionally could be activated within five to 10 days. The National Maritime Administration maintains these ships in peacetime with an average crew of 10 mariners per hull. Official policy states RRF crews will be “supplemented by additional mariners ... once activated”.

However, there are approximately 13,500 American professional mariners. The government, through Military Sealift Command, already employs 6,000, meaning the civilian total is 7,500. Once again, some of these mariners will need to operate domestic merchant shipping, reducing manpower.

The Center for Strategic and Budgetary Assessments projected that manning all MSC ships and U.S.-flagged commercial shipping would require around 10,000 qualified mariners when accounting for shore leave and crew rotation.

Adding the RRF’s ships, the total comes to slightly under 12,000. Thus, only if nearly every single mariner serves can the U.S. logistics fleet be maintained in combat. Moreover, operating for more than six months would require an additional 4,000 mariners. Simply put, it’s beyond the capacity of current U.S. sealift capabilities, even if supplemented by the merchant marine, to resupply U.S. forces in an extended great-power conflict.

The only reasonable remedy is for the government to fund more merchant vessels. The bureaucratic infrastructure for this already exists through the Maritime Administration’s Maritime Security Program, which currently provides a retainer to 60 merchant ships. In return, they fly under a U.S. flag and are available for requisition in wartime. This number must be expanded by at least one-third to provide ships and crews for U.S. combat needs and avoid cutting domestic maritime transport.