This Is the Right Moment for a U.S.-Taiwan Trade Agreement 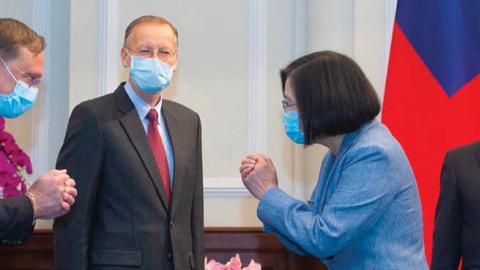 Caption
Taiwan's President Tsai Ing-wen gestures to a US official as US Secretary of Health and Human Services Alex Azar and director of the American of Institute in Taiwan, Brent Christensen, look on during their visit to the Presidential Office in Taipei

Health and Human Services Secretary Alex Azar’s visit to Taiwan and meeting with Taiwan’s President Tsai Ing-wen on 10 August was a useful and intelligent way to re-emphasize Taiwan’s success in containing the COVID pandemic. Azar is the most senior US official to visit Taiwan in 40 years.

But while COVID will pass, China’s effort to subjugate Taiwan and end the US presence in the region is certain to continue. Although no reminders are needed, the US cabinet secretary’s visit demonstrated something else, China’s enmity toward Taiwan and the US. While Secretary Azar was in Taiwan, Chinese fighter jets crossed the midline of the Taiwan Strait, the 100-mile stretch of ocean that separates Taiwan from Communist China.

Military action, however, occupies only a portion of the field on which Chinese rulers’ ambition, Taiwanese democracy, and America’s future as the major Pacific power are contested.

The presence in Taiwan of the US secretary and the delegation that accompanied him also expressed US support for Taiwan’s sovereignty, security, and the robust economic relationship between Taiwan and the US as well as America’s realization that its supply chains of critical imports must shift to friendly states.

Taiwan is the US’ 9th largest trading partner. Its companies sell high-tech goods to such American firms as Dell and Apple. In May of this year, the Taiwan Semiconductor Manufacturing Company announced that it will build a $12 billion dollar facility in Arizona that is expected to create 1600 high-tech jobs and manufacture over 240,000 semiconductor wafers annually.

Both the US and Taiwan are in a position to benefit from increased trade with each other. US security would gain as a result of purchasing a greater volume of strategic manufactures from the markets of a friendly partner—an outcome far preferable than the current situation in which the US depends heavily on China for semiconductors. Taiwan, whose exports to China (27.9 percent of total exports) are double those to the US (14.1 percent) would stop and reverse the flow of capital as well as highly skilled workers to mainland-based firms that export to Taiwan.

A bilateral trade agreement (BTA) between the US and Taiwan would be a major step forward in ending the US’s dependence on China for vital strategic goods. It would at the same time invigorate trade relations between the US and Taiwan. Protections for US intellectual property that do not exist in China would be honored and enforced in Taiwan. A signed BTA would also result in increased agricultural opportunities for US farmers: Taiwan already ranks 8th in the world as a market for US agricultural products including grain and beef.

No less than anything else, a US-Taiwan BTA could re-open prospects for a similar upgrade of trade relationships with other East Asian states that seek to improve financial and security relations with the US as China’s aggressiveness in the region grows. Successful conclusion of a US-Taiwan BTA offers the same advantage to both the US and Taiwan. This will benefit the US economy as the nation recovers from the pandemic and act as a model as the US seeks to decouple vital supply chains from China to friendly states. This is the right moment for the US to establish a bilateral trade agreement with Taiwan.