When It Comes to the Navy, Size Matters 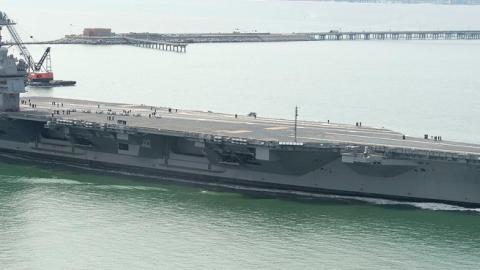 There are many complex questions in modern life that, because of our simplicity, we tend to distill into elementary oppositions. Among these are nature v. nurture, fiscal v. monetary, and Lebron v. Michael. Thousands of doctoral dissertations and the very existence of sports talk radio attest to the continuing preference for such comparisons, and in general, they provide a reasonable starting point for debate, informed and otherwise.

One such opposition is at the heart of the complex question of how large a Navy the United States needs, and its simplicity provides all manner of rhetorical refuge to those who dabble in Seapower and its relation to the strength of our Republic. The comparison is most often stated as “capacity v. capability,” but dispensing with the jargon, it breaks down to the size of a navy as measured by the number of battle-force ships it fields, versus an understanding of how various attributes of that navy (logistics, networks, precision guided munitions among them) combine to contribute to its overall combat power, numbers of ships playing only one role among many others.

The “capability” side of this argument seems to occupy the rhetorical high ground. Only a Luddite would ignore the impact of technology on naval force structure, a circumstance that provides the opportunity for a smaller, modern, navy to amass greater aggregate combat power than a larger, less capable force of the past. The seemingly self-evident nature of this argument reached its zenith during the 2012 Presidential election when Barack Obama sarcastically dismissed Mitt Romney’s call to increase the size of the U.S. Navy.

The capacity v. capability debate continued to rage during the second Obama term, as Secretary of the Navy Ray Mabus (who wanted more ships) waged a bureaucratic guerrilla war against Defense Secretary Ash Carter—who was aided and abetted by Mabus’ former subordinate Bob Work. Work had risen from Under Secretary of the Navy to the position of Deputy Secretary of Defense and had steadfastly maintained that the shipbuilding budget should be decremented to provide additional resources to capability enhancements elsewhere in the Navy, including increased unit lethality, and electronic and cyber warfare upgrades.

The election of Donald Trump in 2016 seemed to represent the high-water mark of the “capability” crowd, as Trump made a 350-ship Navy the centerpiece of his promise to increase America’s military power, an increase in size of 25% over the force he inherited. Painting in broad strokes due to the nature of political campaigns (and unfamiliarity with the subject), Trump avoided discussions of capability and fixed on a number.

Seven months into the Trump Administration, it appears that the President’s repeated pledge to build a 350-ship Navy is being abandoned in favor of the more nuanced “capability” approach. During his recent confirmation hearing, just-confirmed Secretary of the Navy Richard V. Spencer specifically passed on the opportunity to reinforce the 350-ship goal, choosing instead to resort to the talking points of the “capability-over-capacity” argument, telling the Senate Armed Service Committee,  “What I will tell you is that, whether it’s a 355-ship or not, what we also want to get our head around is, can we have a capacity number, but have a capability that’s even greater than that, so have the capability of a 355 that might be a 300-ship Navy.”  Shortly thereafter, Chief of Naval Operations ADM John Richardson spoke to the “2017 Naval Future Force Science and Technology Expo” and also created space between himself and a specific number.  Notably absent from President Trump’s recent remarks at the commissioning of the nation’s newest aircraft carrier (USS GERALD R. FORD (CVN 78)) was any mention of the 350-ship Navy. A potential reason for this distancing could be the ongoing strategic review underway in the Pentagon, a review that will likely generate bills across the Department of Defense. Given the considerable expense associated with a 25% increase in the size of the Navy, Secretary of Defense Jim Mattis is likely pushing not to be tied down to a specific number.

The lack of nuance and sophistication bound up in a simple numerical representation of naval power is both a blessing and a curse for those who believe “capacity” should be more highly weighted. Because of the Constitutional mandate to “provide and maintain a Navy,” Congress looks to the Executive Branch for input as to how it should do that. The technological sophistication and capital-intensive nature of providing and maintaining a modern Navy requires long term plans against which Congress (and the industrial base) must then allocate resources. Those plans take into consideration a broad national defense strategy, advances in technology, the nature of the threat to American interests, and investments in the fleet already made—as modern warships are designed for service lives of between 25 and 50 years.

These variables are related and analyzed, and the result is an annual (Congressionally mandated) 30 Year Shipbuilding Plan, at the heart of which is “the number” which represents that plan’s goal for what the size of the Navy should be. The Reagan Administration had a 600 ship Navy goal. The Clinton Administration’s plan was for just over half of that. George W. Bush fixed on 313, and Barack Obama’s Navy was aiming for 308. Keeping in mind that for much of the recent past, the Navy has spent more on aircraft than ships, this number nonetheless has served as a useful surrogate for the general size of, (and desired investment in, the Navy.

Whatever the number, it is seen by some as limited in value. As Team Capability would argue, it does not begin to account for the virtues of advanced sensors, unmanned systems, networking, and precision guided munitions. Capability advocates sometimes posture the not illogical notion that today’s 276 ship Navy could defeat the Reagan era Navy of twice its size in naval battle, therein contributing to their contention that the “size” (capacity) of the Navy is far less important than its “capability.”

Putting aside for a moment the indisputable fact that our Navy is unlikely to face the Reagan Navy in combat, this breezy dismissal of the importance of size belies a fundamental lack of understanding of American Seapower and the Navy’s role in it.  Simply put, thinking about the size and shape of the Navy through the primary lens of capability virtually ignores what the Navy spends the overwhelming amount of its time doing, which is acting (along with its land force, the Marine Corps) as the nation’s primary peacetime security force where its commercial and diplomatic interests lie—the overwhelming majority of which are proximate to the sea.

The Navy is different. In peacetime, the Navy can and must be able to operate wherever American interests are to be advanced and sustained. The movement and peacetime posture of the Navy is largely unconstrained by political boundaries, which is of course, the central idea behind “freedom of the seas,” a concept that is essential to both the security and prosperity of the United States and all other trading nations. This critical peacetime role is overwhelmingly associated with being there, which is a function of numbers (capacity); numbers to carry out presence where it is desired, numbers to account for the great distances that our fleet must travel to be where desired, and numbers to account for the maintenance necessary to ensure the ships last for their programmed service lives.

The ships carrying out this presence mission must, of course, be capable of combat operations. This is the essence of conventional deterrence, in which would be disturbers of the peace are confronted with tough choices backed up by present, capable, combat power.

Like its sister services, the Navy also has warfighting requirements generated by Combatant Commander generated numbered war plans. However, in the Navy’s case, these wartime requirements are separate and distinct from the considerable strategic, global, peacetime requirements it must fulfill.  And while the sensors, systems, weapons, and networks that enable a fleet to harness its full power are critical when the shooting starts, far more important to the protection and sustainment of American security and prosperity in peacetime is being where the action is likely to be. This is now, and has always been, a function of numbers.

The President, the Secretary of Defense, and the Secretary of the Navy have difficult choices to make about the size and shape of the Department of Defense, and the Department of the Navy. Very smart people are working hard to reach these determinations. It is essential that they understand the nature of the “capacity v. capability” argument when it comes to American Seapower and the U.S. Navy. Specifically, that they do not make the mistake of assuming that the relative weight of capacity and capability required of the U.S. Navy for the conduct of war is the same as that required to deter it. In this question, the Navy is different, and size matters.