Ukraine Embraces the ‘Messy Middle’ to Win the Drone War 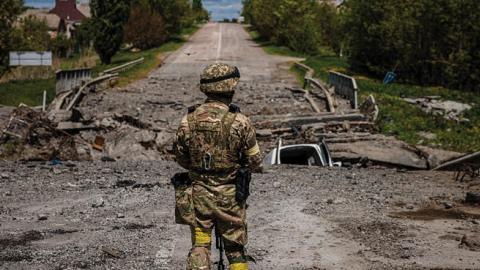 Caption
A soldier of the Kraken Ukrainian special forces unit observes the area at a destroyed bridge north of Kharkiv, on May 16, 2022. (Photo by Dimitar Dilkoff/ AFP)

Despite more than a decade of combat experience with drones, Russian forces have been substantially less effective at employing their own unmanned aircraft. Many of Russia’s small inventory of Orion drones¾a counterpart to the TB2¾were lost to enemy fire. Smaller surveillance and electronic warfare vehicles like the Orlan-10 proved lethal in guiding Russian attacks against potential ambushes, but ultimately failed to enable the assault on Kyiv.

What explains the difference between Russian and Ukrainian success with unmanned systems? Technology is part of it. The radios and sensors in Ukraine’s foreign-designed drones are harder for Russian jammers to defeat, whereas Russia’s unmanned aircraft proved vulnerable to NATO-supplied electronic counter-drone systems. Fundamentally, however, Ukrainian troops are winning the drone war because they embraced new technology and understood that autonomy is a dynamic relationship between operator and machine.

Russia started its invasion of Ukraine coming off a decade of success in drone warfare. During Russia’s operations in Syria and Ukraine, Moscow’s troops honed their tactics for using unmanned aircraft to detect enemy radio emissions and either listen in or geolocate opponents for an artillery strike. In their insurgency across eastern Ukraine, Russian contractors and off-duty soldiers also employed small drones like the Orlan-10 to take over local mobile phone networks, disrupting Ukrainian military communications and sending propaganda to the local population.

The Russian military only recently began fielding large armed or surveillance drones. The new S-70 Okhotnik-B stealth unmanned vehicle is designed to deliver weapons like the U.S. MQ-9 Reaper while the high-altitude Altius-RU surveillance aircraft is similar to the U.S. MQ-4 Global Hawk. Neither has made an appearance in Ukraine, likely due to concerns about maintaining communications with them in the contested electromagnetic spectrum above Ukraine. Instead, Russian troops have relied mostly on smaller, and more familiar, targeting and jamming drones.

Ukrainian forces, in contrast, transformed from having no unmanned vehicles when Russia annexed Crimea in 2014 to having thousands today. And, thanks to Western support, those include some of the most sophisticated small combat drones available like the Phoenix Ghost and Switchblade, the latter of which has been used by U.S. special operators for several years.

The asymmetry in adoption extends to counter-drone technology. Ukraine’s military reportedly has fielded several NATO-supplied electromagnetic warfare systems that have downed dozens of Russian drones. Although it recapitalized its electronic combat units during the past twenty years, Russian jammers have been largely ineffective, and troops have been forced to shoot down Ukrainian drones with surface-to-air missiles that cost substantially more than their targets.

A Teammate, Not a Tool

The other factor driving the Ukrainian military’s drone warfare success is its recognition that human operators and their unmanned systems are a team, rather than workers and their tools. No unmanned aircraft is completely autonomous, in the same way that no manned aircraft is completely independent of outside support or direction. The difference is how much intervention the aircraft needs, what kind, and how often.

Russian troops appear to use their unmanned aircraft like tools or an extension of a manned system. For example, the Orlan-10 is part of the Leer ground-based electronic warfare system and essentially acts as the system’s extended antenna to sniff out or jam enemy transmissions. As a result, Russian drone operations need constant, high-quality communications over long distances and thus are vulnerable to Ukrainian counter-drone systems.

For their part, Ukrainian forces have embraced the “messy middle” of partially automated unmanned systems. Suicide drones like the Switchblade can fly a pre-planned route and find potential targets on their own but need communications with an operator to attack. By letting Switchblades automatically search for Russian armor or artillery over short distances and then directing a strike, Ukrainian troops reduce the quality and amount of radio contact—needed and thus their vulnerability to counter-drone systems.

Larger drones like the TB2 can use satellite communications to remain in contact with remote operators but are also susceptible to jamming from ground or airborne systems. In their attack on the Moskva, Ukrainian forces appear to have avoided the need for constant contact by exploiting the TB2’s automation to have one or more drones fly pre-planned routes designed to confuse the Russian ship’s air defense systems. And when communications were available, Ukrainian forces could use sensor data from the TB2s to update their targeting data for the Neptune missile attack.

The Pentagon should take a lesson from Ukraine as it ponders its own unmanned system development. Today’s U.S. drone portfolio largely consists of either highly automated aircraft like the MQ-4 Global Hawk that can fly for a day without intervention or remotely operated MQ-9 Reapers. At sea, the U.S. Navy is struggling to field unmanned surface and undersea vehicles because they are pursuing what could be an unreasonable degree of independence from human operators. The future of unmanned warfare is in between fully independent and remotely operated platforms. The sooner the U.S. military embraces that messy middle, the sooner it can exploit this rapidly evolving technology.