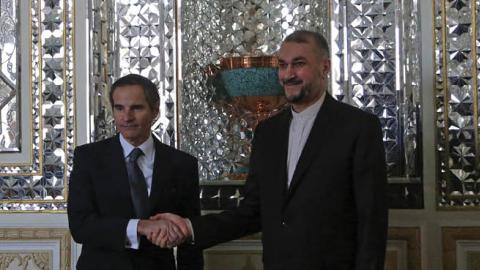 Nevertheless, senior Biden administration officials continue to lobby for an agreement that was always doomed to fail. Their claims of the deal’s supposed benefits have been almost entirely belied by the stark reality of Iran’s actions since the adoption of the Joint Comprehensive Plan of Action (JCPOA) almost seven years ago.

The deal was built on the premise that Iran would accept a détente with the United States — or at the very least, was prepared to moderate its violent, destabilizing behavior, in exchange for economic (and nuclear) incentives. It took almost no time for Iran to prove that this premise was not just false but fantastical.

The years immediately following the conclusion of the JCPOA were marked by a surge in Iran’s aggression across the Middle East, a more than 30 percent jump in Iran’s “defense” budget and increased funding for terrorist groups, including Hamas, Hezbollah and Palestinian Islamic Jihad. Calls for “death to America” echoed in state-dominated mosques across the Islamic Republic.

Even as a narrow nuclear arms control agreement, the deal’s terms were always too weak, too limited, and too temporary to be effective at anything other than kicking the can down the road a bit. The deal is so bad that from the start, its proponents have relied on misdirection, overstatement and even outright lies to make their case.

Iran’s proven ability to violate the deal’s terms rapidly, once it chose to do so, exposed their insufficiency. It is undeniable that the regime deceived, stonewalled and harassed inspectors, despite promises of “unprecedented inspections.” A “one-year break-out time” was calculated using dubious accounting of Iran’s illegally-built uranium enrichment centrifuges. And the agreement’s restrictions on the nuclear program proved to be easily and quickly reversible, debunking the assertions that the JCPOA blocked all of Iran’s paths to a nuclear weapon.

With the original deal thoroughly discredited, Biden administration spokespeople have resorted to a new generation of falsehoods to sell a “return” to the JCPOA. Three stand out.

In his Senate confirmation hearing, now-Secretary of State Antony Blinken explained that then-President-elect Biden sought to return to the deal “as a platform … to seek a longer and stronger agreement.” Other Biden appointees echoed the argument, which at the time appeared to be a novel admission of the JCPOA’s weaknesses.

A return to the JCPOA would necessarily entail the lifting of many of the sanctions that the U.S. put in place after withdrawing from the deal in 2018. Neither Blinken nor any of his colleagues has explained why Iran would agree to negotiate a follow-on agreement that would impose tougher and longer-lasting restrictions, especially after the removal of the most significant sources of pressure on the regime. Their silence is unsurprising. After a year of serial capitulation to Iranian demands at the negotiating table, and Iran’s repeated, explicit rejection of the “longer and stronger” idea, the expression seems to have been dropped from the administration’s lexicon.

The second is Blinken’s claim that the United States seeks “a return to full implementation” of the JCPOA. Blinken knows full well that it is physically and temporally impossible to do so. Iran’s work on advanced centrifuges, high levels of uranium enrichment and uranium metallurgy — in violation of the original deal’s terms — has equipped the regime with irrevocable experience and knowledge needed to develop nuclear weapons.

Nor does the United States really seem to be demanding a return to full implementation. In a renewed deal, Iran reportedly would be allowed to store, rather than destroy, the centrifuges it has built in numbers and capabilities beyond those specified in the JCPOA. Blinken is undoubtedly aware that he cannot deliver the fabled one-year break-out time. Despite knowing these things, he continues to tout returning to “full implementation” or “full compliance.”

The third falsehood is an old deception wrapped in a new layer of untruth. In 2015, President Obama, then-Vice President Joe Biden and others insisted that the JCPOA was limited to nuclear matters and would not affect the maintenance or imposition of American sanctions on Iran for its support of terrorism, human rights violations, arms trafficking or other illicit activities. In practice, the U.S. subordinated all other policy concerns to the nuclear deal, including coming to terms with Iran’s complicity in the atrocities of the Syrian civil war and reportedly putting the brakes on a worldwide, multi-agency investigation of Iran’s terrorist proxy Hezbollah.

Iran has now demanded that the Islamic Revolutionary Guard Corps (IRGC) be removed from the U.S. list of foreign terrorist organizations as a condition for re-upping the JCPOA. Biden, according to his own promises, should have dismissed this out of hand as irrelevant to the nuclear question and contrary to the JCPOA’s terms. Instead, his administration’s various spokespeople have floated a series of trial balloons that include acceding to the Iranian demand, but keeping other sanctions in place, or designating only individual IRGC members or specific IRGC components such as the Quds Force.

That the IRGC killed over 600 American soldiers in Iraq and is today plotting to assassinate former high-ranking American officials should have made Biden’s decision even easier. But for the White House, the IRGC question is a useful distraction from the real issue: The JCPOA never did and never will solve the Iranian nuclear problem. This is the heart of the matter and will remain so, whatever Biden decides about the IRGC.

The day is rapidly approaching when the president will have to contend with the most dangerous lie of them all: The JCPOA forces its supporters to pretend that Iran’s nuclear program is peaceful when clearly it is not. With or without the JCPOA, Biden must formulate a genuine solution to the Iranian nuclear threat. If he fails, either Iran will acquire nuclear weapons or rival powers will try to use force to prevent that outcome, potentially sparking a broader regional war. To avoid these grave outcomes, Biden and his team must stop lying about the JCPOA — not just to Congress, the press and the public, but to themselves.