Americans worried about the rush to legalize marijuana have been told to wait for the results of the “Colorado experiment” before passing judgment. This week, more such results arrived. The federal government released state-level drug-use data and the findings are frightening.

The National Survey on Drug Use and Health (NSDUH) state-level data were quietly posted on December 19 by the Department of Health and Human Services’ Substance Abuse and Mental Health Services Administration (SAMHSA) without a press conference. Perhaps that is because the report clearly reveals the catastrophic effects of marijuana legalization on the drug usage patterns of Colorado’s citizens, including the state’s children and young adults.

By making the highest-potency marijuana the U.S. has ever seen widely and commercially available, the state of Colorado is experiencing what may be the worst self-inflicted wound in that state’s proud history, and the trends forecast that it is likely to get worse.

Colorado greatly expanded medical marijuana access in 2009, and then permitted commercial marijuana production and sales at the beginning of 2014. Now nearly one-in-every-two (45 percent) Colorado young adults aged 18-25 have used marijuana in the past year. For those in this cohort aged 18-20, their marijuana use is illegal, under Colorado law allowing commercial sales to those over 21.

The implications for Colorado’s future are deeply troubling. The 18-25 year-old age group captures youth just entering the work force, starting college, and those of prime age for entering military service—and they are regularly stoned.

What family will move to Colorado with that future risk for their children? What business will choose to move to Colorado with a drug-saturated workforce awaiting them there? What serious Colorado businesses that have the ability to move will choose to stay? Given the well-established association between heavy marijuana use and health risks such as psychotic events, what will be the impact on state budgets for such things as mental health services, or provision of welfare services?

For any marijuana use measure but one, Colorado is at the top of the state heap. (That exception is Vermont, another medical marijuana state that managed to post 48 percent of its 18-25 year olds using.) Moreover, other legalizing states and jurisdictions such as Oregon and the District of Columbia, have rates that are beginning to approach those of Colorado, lest there be any doubt as to what is driving these numbers. 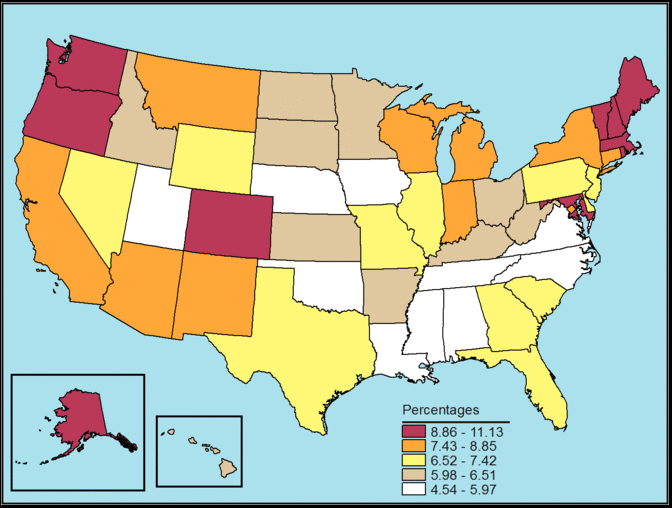 In addition to capturing those who have used marijuana in the past year, NSDUH also captures those that have used marijuana in the “Past Month,” or current users. Not surprisingly, Colorado also leads the nation in Past Month use for youth 12-17 years old, with the state’s rate of use for this age group fully 55 percent higher than the national average for all states (11.13 percent vs. 7.20 percent).

But the real change can be seen in Colorado’s 18-25 year olds. Their Past Month rates of use also lead the nation and exceed the national average by 61 percent (31.75 percent vs. 19.70 percent). That is a rise of 31 percent since 2008-2009, when medical marijuana in that state was greatly expanded.

Beyond public health and public safety concerns, the social and educational impact of these high rates are deeply concerning.

The final sobering realization is that during this last election cycle, while many were blandly reassuring voters that the Colorado “experiment” was not only working, it was benign, we have seen yet further states follow Colorado’s lead, accepting commercial, legalized marijuana markets, including our nation’s largest economic and cultural engine, California.

It was always the strategy of drug legalization advocates, particularly those who seek to profit off the drug, to get as many states to legalize as quickly as possible before the lagging data started coming in. State-level marijuana business interests, once established, could then help fund the continued legalization wave. This strategy has had success in the early states, including a few this year.

But now the consequences of marijuana legalization are beginning to be undeniable. New state legalization campaigns will have to face a reality quite different from the advocates’ no-consequence fantasy. Fortunately, marijuana is still illegal under federal law and federal law should rule —it merely needs to be enforced to save lives. With a new marijuana-averse administration arriving in Washington at the same time the latest state-level report is becoming more widely known, the future of marijuana legalization looks bleak.

Instead of contemplating marijuana legalization’s expansion, it’s time to begin reversing the damage. Responsible public health professionals, politicians, employers, educators, and parents can now see that the “experiment” has failed profoundly. The harm continues to grow, however, and, for many, the damage may last a lifetime.

The Impact of Drug Decriminalization

When Did Progressive Elites Turn against Democracy?