Mr. Chairman and distinguished Members of the Seapower Subcommittee:

President Reagan recognized the centrality of maritime power in American national security policy. His successful effort in creating a 600-ship Navy to support it is a remarkable story of committed national Executive and Legislative branch leadership. More than three decades later, it is important to recall the policy context within which those decisions were made and how that policy context shaped his effort to rebuild US military to support American diplomacy based on a policy of “peace through strength”.

President Reagan was elected to office in November 1980 at an extraordinary juncture in our modern history. Soviet dominance of Central and Eastern Europe, in place since 1945, was solidified by the ruthless Soviet enforcement of the Brezhnev Doctrine. This doctrine was imposed following the invasion and suppression of the Prague Spring movement in 1968. Regrettably, Western resignation and acceptance of the invasion’s permanence reinforced and amplified Soviet dominance.1 By 1980, the Soviet Union had invaded Afghanistan and projected its military power through surrogate movements in the Western Hemisphere, Africa, South Asia, and the Middle East. The Soviet Union’s nuclear modernization surge, enabled by the unenforced arms control agreements of the early 1970s jeopardized the credibility of the US nuclear deterrent, and the extended deterrent. Moreover, the hollowed-out US military force was unable to impose a credible deterrent to arrest the global Soviet advance. The failure of the Desert One mission to rescue US diplomats taken hostage by Iranian authorities in 1979 was both a tragedy and a metaphor for the failed policies President Reagan ultimately reversed.

National policy paralysis in 1980 was twinned with the consequences of extraordinarily damaging sequence of economic and financial policy choices made by the prior administration. When President Reagan took office, the rate of inflation was over 12 percent, while the prime interest rate was over 15 percent; ruinous to both the economy and national defense. This was not a promising fiscal environment to initiate a major defense recapitalization and modernization effort.

President Reagan recognized that a vibrant economy was a precondition to being able to conduct an effective national security policy, but – perhaps uniquely – he also recognized their mutual interdependence. In 1981, rather than “fixing” the ailing economy he inherited first, he, in collaboration with House Speaker Tip O’Neill, put aside their considerable policy differences and converged on a policy course of action that permitted both economic and national security aims to be harmonized and implemented. The outcome produced by their collaboration resulted in an 18 year-long economic expansion, and the collapse of the former Soviet Union.

The Reagan Naval Modernization Program in its Foreign Policy Context

US defense modernization needs were extensive. After a prolonged period of neglect – as Secretary Weinberger put it at the outset of the Reagan administration, “there was nothing we did not need”. However, the President’s national security strategy drove the defense budget toward a narrow range of priorities that would underpin his specific diplomatic objectives. President Reagan reversed the policy of containment that had been in place since 1950.He adopted instead a US national security policy to undermine the legitimacy of the Soviet State and its capacity to dominate the nations of Central and Eastern Europe while mounting a global threat to US vital interests.

The rebuilding of American military power as a maritime nation was one of the major themes of the Reagan Presidency, and among the most enduring legacies of his tenure. Naval power and presence was a primary enabler of President Reagan’s policy focus of inflicting costs on the Soviet Union as they attempted to maintain their grip on Europe while projecting their power into the Western Hemisphere, Africa, the Middle East and South Asia. The implementation of the policy was not simply a question of the number of ships; instead the mix of types of ships and their capabilities were decisive.

Typically, over 100 naval combatant vessels were forward deployed at any given time on a world-wide basis. The maritime strategy was also coupled to collaborative operations with allied naval forces.
The three-phase approach to the implementation of the maritime strategy (“deterrence or the transition to war; seizing the initiative, and carrying the fight to the enemy”) meant that aircraft carrier battle group expansion would be the most significant driver

The capacity to project US military power world-wide was the centerpiece of the Reagan administration’s policy objective of blocking the expansion of Soviet military power. It enabled attacking the extremities of its global reach in areas such as Central America, Africa, the Middle East, and South Asia while holding Soviet military power in Europe at risk. The Naval modernization program was also able to leverage technology developments, particularly the technologies of precision strike and persistent surveillance that was responsible for the eclipse of Soviet military power in Europe. The US Navy’s forward presence amplified the parallel investments made in the US Army’s Air-Land Battle program and the US Air Force “Follow-on-Force-Attack” initiative.

Taken together these efforts created a powerful combined arms force to support the President’s national defense strategy that in turn underpinned his national security strategy of delegitimizing and rolling-back the Soviet Union’s dominance of Central and Eastern Europe while blocking the outward thrust of Soviet military power elsewhere in the world.

Figure 1 below summarizes the impact on both the number and capabilities mix of naval combatant vessels of the Reagan naval modernization program during his term of office. 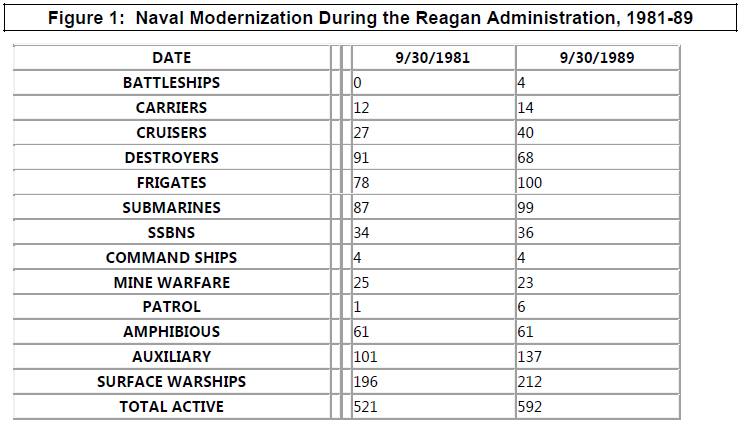 How the Reagan Naval Modernization Program Was Financed

In President Reagan’s first defense budget (FY 1983), the US Navy budget grew by 35% over the last Carter Administration-proposed budget (FY 82). During the Reagan administration’s term of office, $268 billion was appropriated for the US Navy procurement accounts including $100.4 billion for the shipbuilding account (SCN). An additional $75.7 billion was appropriated for naval aircraft procurement. The administration’s advocacy for its naval modernization initiative was well-received by the Congress including some additional funding provided by the Congress in FY 81, FY 82, FY 88, and FY 89.

The funding for the program did not require any unique statutory concessions or changes in existing appropriation disciplines. US Navy management changes in its acquisition practices in the shipbuilding program (compared to the previous practice) proved to be constructive in controlling cost. These managerial initiatives included:

The Navy took advantage of a broader defense-wide practice of multi-year procurement. During the Reagan administration, 32 multi-year procurements (MYP) were initiated across all Military Departments. In some cases, the cost-reducing property of MYPs were magnified by integrating DoD procurements with those of foreign buyers to reap further economies of scale and reduce the cost of national defense.

The success of the Reagan naval modernization program using the acquisition practices available at the time offers a useful basis for comparison with the experience of a subsequent administration. The administration of President George W. Bush faced a need to rapidly accelerate the procurement of a widely-supported special-purpose armored combat vehicle based on a South African developed “V-hull,” the Mine-Resistant Armor Protected (MRAP) vehicle. The MRAP vehicles were urgently needed to reduce the exposure of US and allied forces to improvised explosive devices in Afghanistan and Iraq.

While this program was a remarkable defense-industrial success in tactical and operational terms (12,000 vehicles procured between 2007 and 2012), it was only possible with an extraordinary effort to “bend” to the breaking point, DoD acquisition regulations. It necessitated intense personal involvement by the Secretary of Defense to surmount the baroque accumulation of financial, managerial, statutory, and cultural barriers to the rapid acquisition of urgently needed systems in the DoD. It was not a model for future rapid procurement efforts. The intense regulatory barriers are well known and have been identified by several studies by the Defense Science Board as well as other entities. Nevertheless, they persist despite for an accumulation of cultural, political, and institutional reasons despite the determined effort of several Secretaries of Defense to change them.

The current Fleet, at the end of a slow recessional that has been underway since 1989, has been reduced to 275 ships. This is the lowest figure in a century (245 in 1916). There is significant excess capacity in the industrial base for surface shipbuilding – a circumstance which closely paralleled those of the 1980s. Management changes using precedents set during the Reagan administration shipbuilding initiative would support the delivery of the additional 80 ships to reach the desired 355 ship Fleet. This recapitalization and modernization is within the existing industrial capacity of the industry.

The submarine production capacity is more stressed, but it seems likely that the industry will be able to deliver one of the Columbia SSBNs (Ohio-class) and two of the Virginia-class fast attack submarines per year.
The administration’s 355-ship Navy goal is achievable based on modern fiscal and industrial experience during the Reagan administration, and an evaluation of the capacity of the industrial base to produce the desired number of ships and submarines.

Perhaps the most significant unresolved issue is whether the DoD and US Navy leadership will be able to overcome the bureaucratic, managerial, contractual, and oversight encumbrances that have accumulated since the 1981-89 period. These encumbrances pose the most significant risk to the ability of the administration to achieve its naval modernization and recapitalization objectives.

How the US Can Help Ukraine Win

In an interview with Boyd Matheson on Inside Sources, Bryan Clark discusses what America should be doing when it comes to Ukraine. iframe#1 ...

Russia’s willingness to use force in Europe creates incentives for a division of labor between Europe and the United States. This allows Europe to f...

Counterbalance | Ep. 40: The Fall of Afghanistan and Invasion of Ukraine Tell a Story of American Grand Strategy, or Lack Thereof

With the world still reeling from the fall of Afghanistan and the invasion of Ukraine, Host Marshall Kosloff talks with Hudson Senior Fellow Rebeccah ...