Elon Musk is both the world’s richest person and one of society’s mostly visibly eccentric figures. As a result, his acquisition of Twitter has captured national intrigue in recent days.

On all sides of the cultural divide, much has been made about how Musk’s purchase might affect online speech. Some believe Musk’s purchase will prevent Twitter from being used in the future as a tool for arbitrary and arguably politically-motivated censorship, such as when it infamously blocked the New York Post’s Hunter Biden laptop story from being shared on the platform. Others fear Musk’s buyout will make Twitter “far more toxic” and “a scary place.”

Regardless of what may come for the platform and its users, Twitter is, at the end of the day, not just a technology product or social experiment. It’s a business. At the end of 2021, Twitter had 217 million monetizable daily active users posting 500 million tweets per day. It’s the 9th most-visited website globally. A quarter of U.S. adults use Twitter, spending, on average, 5.1 hours per month on the platform.

With all this in mind, then, perhaps the more pressing question should instead be: is Twitter a good buy at $44 billion?

A glance at its financial statements and corresponding figures would not provide much comfort for Mr. Musk. Twitter’s total revenues for 2021 were roughly $5 billion, with an enterprise value of $36.51 billion. This leaves Twitter with an enterprise-value-to-revenue ratio of 7.19.

Enterprise value is a measure of a company’s total value, inclusive of market capitalization, debts, and cash. A company’s enterprise-value-to-revenue ratio, in turn, compares the company’s value with its revenues.

Twitter’s ratio of 7.19 is high, indicating the company is generating fairly small revenues relative to its total value. Many retail, manufacturing, and services businesses have an equivalent ratio of less than 1. Of course, startup companies with substantial promise may have high ratios, but Twitter is a 16-year-old company. It strains credulity to suggest that Twitter is still a startup or should be treated as such.

More troubling is Twitter’s enterprise-value-to-EBITDA ratio of 197.5. EBITDA stands for Earnings Before Interest, Taxes, Depreciation, and Amortization, and is a widely used measure of a company’s profit and capacity to take on additional debt. Many businesses in traditional industries operate in a range of 5 to 15. Twitter’s ratio of 197.5 means that within the course of a year, all the money it brings in represents only half of one percent of the company’s total value.

Another commonly used measurement is Price-Earnings-to-Growth, or PEG, ratio, which reflects a company’s future expected earnings growth. Twitter’s PEG ratio cannot even be calculated because its net income has been negative in most recent quarters.

For financial investors, the relevant question is not what these ratios are in and of themselves, but instead how they compare to other firms in the same or similar industries. To that end, we prepared the following table, containing the EV/Revenue, EV/EBITDA, and PEG ratios for Twitter and ten other prominent online firms: 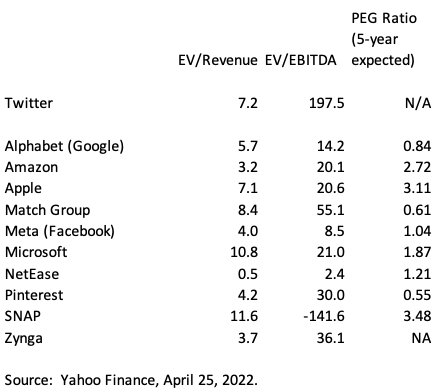 Some of these firms—such as Alphabet, Amazon, Apple, Meta, and Microsoft—are much larger than Twitter. Others—including Match Group, NetEase, Pinterest, SNAP, and Zynga—are either roughly the same size as Twitter or smaller. Still, regardless of their size, these three ratios are relevant measures for each of these publicly-traded companies.

Let’s examine each of these ratios for Twitter. As for Twitter’s enterprise-value-to-revenue ratio, this value, despite being high, is not unusual among this particular group. It would rank #4 in this group—roughly in the middle of the pack.

Twitter’s enterprise-value-to-EBITDA ratio, however, paints a much starker picture. Twitter’s ratio of 197.5 is the second worst, well above the third highest, Match Group, with 55.1. Only SNAP, with a negative ratio due to its negative EBITDA, fairs worse than Twitter. From 2017 to 2019, when Twitter was valued substantially less, this ratio was below 40. But in the years outside this range, as Twitter’s value has grown, the ratio has been either higher or negative.

As for PEG ratio—Twitter has not had a measurable figure in either 2020 or 2021. The only other company in the table above without a measurable PEG ratio is Zynga.

Of course, the true value of a business depends on additional factors beyond these. Nevertheless, these three values are important measures of a company’s current and future revenue-earning potential. Consequently, at least at first blush, it appears that there are many other online companies with better current and future financial prospects than Twitter.

Musk claims that he is not purchasing Twitter as a financial investment, but instead to save “civilization.” He may ultimately succeed at both. Despite the company’s current shortcomings, of the companies reviewed in the table above, Twitter is easily the most widely-recognized of the firms of its size class. It has little debt and might see better prospects under improved management and execution strategies.

But whether Elon Musk, by himself, will truly “revitalize” “the digital town square” and consequently “the bedrock of democracy” is to be seen. Democracies rarely depend on one individual to survive.

While Mr. Musk’s crusade may be laudable for free speech proponents, he, and all investors, might also do well to reflect upon the following passage from Nobel Laureate Milton Friedman’s Capitalism and Freedom:

“Few trends could so thoroughly undermine the very foundations of our free society as the acceptance by corporate officials of a social responsibility other than to make as much money for their stockholders as possible.”

Doing otherwise, Professor Friedman explains, is a “fundamentally subversive doctrine” that suggests “collectivist ends can be attained without collectivist means.” Corporate revenues and resources, and thus the money of customers and wages of workers, is taken without their consent to be used for causes they may or may not support. Doing so “extend[s] the scope of the political mechanism to every activity” without the guardrails typical of a democracy.

As a public company, Twitter often focused on similar notions of “social responsibility,” with less attention paid to financial performance. A privately-owned Twitter ultimately ought to take the opposite tack: make as much money for shareholders—in this case, Mr. Musk—as possible. Only when businesses follow this dictum can civilization and democracy be truly preserved.

Legal Fellow, Center for the Economics of the Internet

Mike Pompeo appears on Fox News to discuss the Inflation Reduction Act and the one-year anniversary of the United States' Afghanistan withdrawal...

Arthur Herman discusses how America's China policy has failed, and how it could be corrected. ...

Less US Production a Factor in Fuel Prices