Any move toward a “no use” nuclear deterrence policy would be a huge mistake. 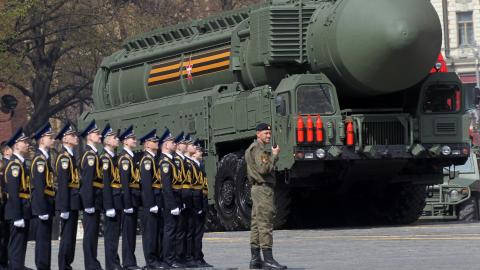 Following Russian president Vladimir Putin’s decision to invade Ukraine, Russia has serially threatened Ukraine, NATO, and the West with nuclear threats. While dangerous in itself, Moscow’s threats are balanced by an equally dangerous reaction from the West, where multiple officials and experts have proposed that the United States take nuclear deterrence completely off the table. Ironically, this may make Putin more likely to use nuclear force.

This cluster of advocates for a conventional, non-nuclear response to Russian nuclear use is not new. The late Bruce Blair (the former Global Zero chief) told Congress in 2019 that he wanted the Russians to bear the moral weight of breaking the nuclear taboo, telling Rep. Mike Turner (R-OH) at a House Armed Services Committee hearing the United States should only respond conventionally to a Russian nuclear attack.

But French president Emmanuel Macron has now gone further, arguing recently that the West’s reaction must not include nuclear weapons under any circumstances. Now there is a difference between a “must” response and an “option” response. Rose Gottemoeller, a former U.S. arms control negotiator and NATO official, recently suggested that we choose only to use conventional forces should Moscow use nuclear weapons. Leon Panetta, the former secretary of defense, also called for the United States to respond but choose to do so only with strong conventional retaliatory strikes against Russian forces in Ukraine.

Panetta’s rationale assumes any use of theater or tactical nuclear weapons is too risky because there is no assurance a retaliatory strike will be small or limited. But he left the nuclear option on the table, as did Gottemoeller.

However, any move toward a “no use” policy would be a huge mistake for five reasons.

First, keeping the U.S. response at the conventional level will not necessarily prevent Russia from subsequently employing nuclear force. If Russia knows it can be defeated by the use of American or NATO conventional armaments alone, why would Russia not use nuclear force for the very same reason it intended to initiate nuclear strikes in the first place?

Second, the advocates of “no use” must know that U.S. military planners, when asked by Congress, explain that the United States can win a conventional military conflict against Russia only if nuclear weapons are not introduced into the fight.

Third, advocates of responding only with conventional strikes miss that in April 1999, Russia changed its strategy to what former U.S. Air Force general John Hyten described as an “escalate to win” doctrine that explicitly calls for the development of small-scale and highly accurate battlefield nuclear weapons with high political and diplomatic leverage.

Fourth, as noted by nuclear expert Franklin Miller, Putin sees a strategic gap between the U.S. vs Russian theater or shorter-range nuclear weapons capability. After all, Russia has somewhere between 2,000-5,000 such weapons while the United States has just 200 such gravity bombs deployed on fighter planes in Europe (and none in Asia).

And fifth, taking nuclear deterrence off the table completely, as Macron proposed, gives Putin and such adversaries a relatively free hand to use nuclear weapons with impunity, which obviously reduces the threshold at which nuclear war would be waged.

If the United States is serious about sustaining deterrence, the strategic gap with Russia needs to be narrowed. The United States is contemplating the development of a new nuclear-capable Navy cruise missile (SLCM-N) but the current administration has argued that it is not a “magic bullet” and that alternatives are available. However, while conventional alternatives might indeed be available, the question is whether they are sufficiently credible to deter Putin’s use of nuclear weapons and convince him that his theory of victory will lead to defeat.

It is obvious U.S. deterrence did not dissuade Putin from invading Ukraine. In fact, as Russian expert Stephen Blank, a senior fellow at the Foreign Policy Research Institute, has warned for over two decades, Putin’s idea of nuclear deterrence is not to prevent war but to deter the United States from coming to the defense of allies that are victims of Russian aggression.

But by keeping the numbers small, Putin believes he can “win” by coercing or blackmailing the United States to stand down. That is his theory of victory and unless we can deter it and negate it, we could very well lose.

Tulsi Gabbard, among others, has argued that the United States has no interest in challenging Russia, a nation with more nuclear weapons than any other on Earth, over Ukraine, a country in Russia’s sphere of interest. Similarly, protesters at a town hall meeting with Rep. Alexandria Ocasio-Cortez (D-NY), a progressive member of the congressional “Squad,” slammed her for voting for more military assistance for Ukraine and putting her constituents at risk of dying in a nuclear holocaust.

During the Cold War, the United States extended its nuclear umbrella over NATO and its western Pacific allies because Washington did not want to spend what it would take to conventionally defeat every Soviet, Chinese, or North Korean tank, ship, and aircraft. What is different today is that while the United States maintains an extended nuclear deterrent over its allies, it has not modernized its theater nuclear forces or carefully analyzed and assessed the strategy needed to sustain a credible deterrent since the end of the Cold War. For the first time in history, the United States now faces two nuclear-armed peer competitors.

The United States can defend its allies while preventing the use of nuclear weapons by anyone, anywhere. But that requires the United States and its allies to be prepared to counter any such use with sufficiently credible power, including by having the option to use nuclear force, to make adversaries stand down.

This requires not only the capability but the willingness to execute a nuclear response if necessary. Otherwise, our deterrent is based on a bluff, which is a dangerous policy. Telling adversaries that the prospect of nuclear escalation terrifies the United States and NATO, and would automatically herald Armageddon, also may render the use of nuclear weapons “unthinkable” and “unfeasible.”

However, this line of thinking undermines the extended deterrent that the United States has maintained for seven decades and thankfully kept the peace.

As Herman Kahn of the Hudson Institute once wrote, the best way to look credible is to be credible. If the United States would rather not be credible, then it should get out of the nuclear business altogether—an outcome that would open the door for others to use nuclear weapons without fear of a commensurate response.

America’s job is to remove that dangerous prospect.

Read in the National Interest.