The Iran Man Behind the Nuclear Curtain 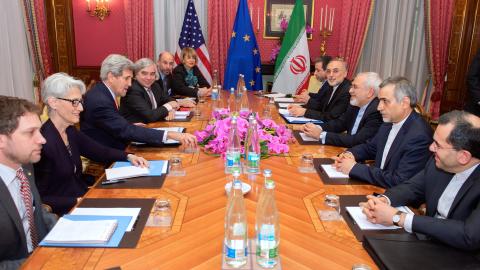 Caption
US officials including John Kerry and Robert Malley negotiate terms of a nuclear nonproliferation agreement with the leaders of Iran's nuclear program in Lausanne, Switzerland, on March 19, 2015. (State Department)

The 2015 Joint Comprehensive Plan of Action (JCPOA) may be resurrected, but opposition is coming from an unusual place. After years of minimal constructive input, the UN International Atomic Energy Administration (IAEA) has suddenly found a voice – that of its Director General, Raphael Grossi, who insists Iranian nuclear weapons work be fully revealed and inspections not be “paused,” and thus abandoned, as Iran presently insists.

Grossi and the IAEA are concerned by the presence of unexplained uranium particles in Iranian facilities built and operated for the 1989 AMAD nuclear weapons program. The program, ostensibly ended in 2003, has long been thought to have continued with both overt and covert nuclear activities, a theory given weight by documents smuggled out of Iran by Israel in 2018. In June 2022, the IAEA reported on the uranium particles and admonished Iran – which responded by turning off IAEA cameras inside the facilities.

The IAEA’s concern is welcome, late and mild as it is.

Supporters of a new JCPOA admit the Iranian position is “problematic.” The UN arms embargo on Iran expired in 2020, the snapback sanctions provision expires in 2025, and all restrictions expire in 2030. But, they argue, the US then would be no worse off with the JCPOA than without it, as Iran would have the ability to quickly produce enough nuclear weapons fuel for a nuclear warhead with or without the deal.

Thus, they argue, the US has nothing to lose and it just might be that in the intervening eight years, the Iranian economic sanctions, having expired, would lead to Tehran become more integrated into the world economy with “more butter” rather than “more guns” guiding the Iranian leadership. [The same strategy that thought China’s accession to international institutions and trade with the US would result in the “peaceful rise” of Chinese power.]

The IAEA concerns cannot be easily dismissed. Built into JCPOA II is the idea that key deficiencies in the original must be corrected. “Longer and stronger,” President Joe Biden said. The foremost concern is precisely the investigation of prior nuclear activity, on which the IAEA is now insisting, and which Tehran is demanding to be terminated. Without a definitive baseline, how would the US know the status of Iran’s nuclear ambitions and whether we are being snookered? That is precisely what we did not know the first time.

Iran is also massively non-compliant with both the 1969 Nuclear Non-Proliferation Treaty (NPT) and the comprehensive safeguards’ agreement under which Iran was required to disavow nuclear weapons capability. The JCPOA was necessary in fact because Iran was already in serious violation of its NPT legal obligations and was feared sprinting toward a nuclear weapon.

In addition, Iran received a singular dispensation to continue its nuclear fuel enrichment when Secretary Kerry announced Iran “had a right to enrich.” No other country could do that, says Mathew Kroenig of the Atlantic Council, adding that the Republic of Korea, for example, has a robust nuclear energy industry, but does not produce its own nuclear fuel.

This was a top requirement of Eisenhower’s Atoms for Peace framework, to keep nuclear energy programs sharply distinct and away from any nuclear weapons capability. The NPT declares a right to research but not an explicit right to enrich and certainly not outside the legal requirements of the NPT and additional safeguard agreements.

The proposed nuclear deal does not move Iran further away from nuclear fuel enrichment, but in fact closer. Iran demands that it be allowed to not only produce nuclear enriched material, but to so with more advanced centrifuges, which could lead to an “industrial strength” nuclear program capable of building nuclear weapons.

Furthermore, left by the wayside and kicked down the road would be discussion on limits on Iran’s ballistic missile capability, now the most robust in all the Middle East, as well as information about its rocket production and exports.

With sanctions gone, Iran’s multi-billion-dollar state sponsored terrorism empire, including the IRGC, Hezbollah, Hamas, Islamic Jihad, and the Houthis gets a huge cash infusion, especially rockets and missiles, as the end of economic sanctions on Iran is reported by 2030 to be worth one trillion dollars.

US (and Other) Options

The most often mentioned alternative is for the US to eliminate much of the nuclear infrastructure in Iran by militarily taking out what is referenced as “four key nuclear buildings.” Or for Israel to do the dirty work.

The threat of force – from Israel, not the US – would appear to be the hidden hand. And that hand may not come only in the form of aerial attacks, which would likely cause the greatest collateral damage. There is possibility of special operations, including cyber or attacks on peripheral systems – power plants, water cooling or air purification systems for underground bunkers.

Opponents warn that Iran would subsequently launch a retaliatory terror war against the United States or Israel, and given the size of Iran, it is assumed a military conflict could very well expand and last decades, not unlike the conflicts in Afghanistan and Iraq.

According to many supporters of JCPOA II, Iran sees it as an issue of “national pride and prestige,” and a “right to enrich.” It is assumed not to be about actually using the capability. For them, giving Iran MORE nuclear capability is prelude to Tehran’s agreement to eventually have LESS nuclear technology or even NO nuclear technology.

Ironically, this is what Director Grossi objects to: the UN is being asked to support JCPOA II that bribes Iran to maintain the fiction of being supportive of abolition even as the deal expands Iran’s possession of nuclear weapons technology.

While nuclear abolition is indeed called for by the original 1969 NPT, that goal is explicitly paired with conventional disarmament. No US President would have supported an agreement whose goal left untouched the huge Soviet conventional forces advantage in Central Europe while first getting rid of US nuclear weapons, which represented the military umbrella over NATO, or the deterrent hammer the US kept in Europe to forestall a Soviet tank army invasion through the Fulda Gap.

Although the dominant narrative today is that any military option is off the table, in reality, diplomacy without the threat of force is what former Senator Malcolm Wallop called “prayer” or as Henry Kissinger explained “is without effect.”

Without the threat of nuclear weapons, the US could simply not have stopped Soviet aggression.

But didn’t President Reagan propose that all nuclear weapons be eliminated? No, he did not. Reagan at Reykjavík sought to eliminate fast-flyers or land and sea based intercontinental ballistic missiles, not the flexible strategic bombers, nor the tens of thousands of theater and medium range nuclear forces that were difficult to identify.

Reagan’s key purpose was to eliminate the forces that would enable the Soviets to try a pre-emptive disarming strike, what the former President termed in 1979 as the “window of vulnerability” which the massive Soviet nuclear buildup created.

To close that window, Reagan adopted a strategy of reductions in nuclear weapons, especially first strike weapons, modernization of the US nuclear deterrent, and deploying missile defenses.

Reductions under INF and START I proceeded, but the Russian Duma opposed banning multiple warhead ICBMs (MIRVs) as called for under START II, a clue to why abolition will never be accepted by Moscow.

As General Brent Scowcroft once explained, heavy ICBMs are the “coin of the realm” for the Russians. In 1999, the Duma rejected START II and instead adopted a massive nuclear modernization plan put together by none other than Vladimir Putin, then Secretary of the Security Council. When he became President, he put the plan into place to where now over 90% of the proposed modernization is completed.

Key to understanding what Russia is up to (and by reference Iran) is to understand what purpose nuclear weapons serve. Nuclear weapons are weapons of coercion and blackmail, securing for Moscow (or Iran) the standing down of US and NATO (and Israeli?) forces in the face of Russian (or Iranian) military aggression.

Today, Moscow is developing multiple nuclear weapons systems of very low-yield and high accuracy. Moscow definitely believes in nuclear “war fighting” despite contrary phrases of restraint sometimes spoken by Mr. Putin but overwhelmed by the some nearly forty explicit nuclear threats by Russian officials to the US since the March invasion of Ukraine.

Iran is no different than Russia. The mullahs and Putin are on the same page but with different timetables.

Iran wants to hide, not advertise, its nuclear ambitions by getting an IAEA clean bill of health or a nuclear good housekeeping certificate. With such a piece of paper, Tehran thinks it can eliminate the economic sanctions it now faces.

In short, pretend to be for abolition.

But with a new deal, there will be a sharp surge in Iranian revolutionary Guard Corp (IRGC) cash with which to expand and arm its Shia empire which now includes Lebanon, Syria, Iraq, and Yemen, even as it seeks to further partner with Moscow and Beijing to achieve its hegemonic goals.

Any new agreement that does not take these factors into account will fail to stop Iran’s eventual sprint to a nuclear bomb. The US thus faces a dilemma: to accept a weaker and shorter agreement now, which goes against the original goals set, or hold out for something stronger and better.

Logic tells you that a new deal is going to be weaker than the original as some restrictions imposed have already or are soon expiring. Technologically Iran starts in a much better position today than in 2015 when the JCPOA sunset provisions were originally adopted. Iran has since developed a fleet of advanced centrifuges and modified cascades able to produce high enriched uranium, indispensable technologies giving confidence to some Iranian officials to recently advertise—inadvertently – its nuclear weapons capabilities.

Any new deal that requires the IAEA to "close" or “delay” its investigations into previous Iranian nuclear related activities, would demand, as in the Wizard of Oz, that Toto “pay no attention to the Iran man behind the nuclear curtain.”