The Iranian Drone Threat and How to Counter It 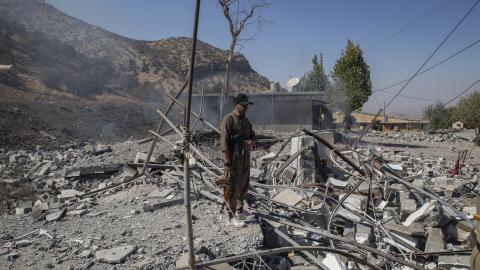 Caption
A member of the Komala opposition party stands in the remains of what used to be its headquarters. Iranian missiles and drones struck multiple headquarters of Kurdish opposition groups in the KRI on September 28, 2022, in Sulaymaniyah, Iraq. (Hawre Khalid/Getty Images)

Iran has been stepping up its drone game and devoting considerable resources to a domestic drone program. Some of these drones are armed, others have only a reconnaissance role, some — such as the Mojer-6 drone shot down by an American fighter jet last week over Iraqi Kurdistan — can do both.

Tehran also has an inventory of so-called “suicide drones,” such as the Shahed-136, which are packed with explosives and crashed into a target instead of returning to base. The end result of Tehran’s efforts has been an extensive inventory of drones that has allowed it to project power across the Middle East at a relatively low cost. These drones have also been used by Iran’s proxies across the region, such as the Houthis in Yemen.

Last week’s Iranian drone and missile strikes in northern Iraq were part of a growing trend. Other recent strikes have hit civilian targets in Saudi Arabia and the UAE, and last month Iranian drones operated by Tehran’s proxies attacked US forces in Syria. Last October, US and Syrian opposition forces were targeted by a drone attack on Al-Tanf base in southeastern Syria. At least five drones armed with bombs attacked both the US side of the base and the side housing Syrian opposition fighters. Luckily, there were no casualties.

The Iranian drone threat now extends beyond the region, and into Ukraine, where Tehran is now supplying them to Russia. It is no secret that Russian-Iranian military cooperation has been occurring for years. Russia’s stockpile of drones has become increasingly depleted by surprisingly effective Ukrainian air defenses. Also complicating matters for Russia is the impact of international economic sanctions that make importing the required component parts to manufacture drones more challenging. As it becomes more difficult for Russia to replace its battlefield loses in Ukraine, Moscow will lean on Tehran to fill the gap. Always in need of money, and forever dependent on Russian diplomatic support on the global stage, Iran is more than happy to oblige.

Iranian Mojer-6 drones have already been shot down in Ukraine, and last week Ukraine’s main port city of Odesa came under attack by Shahed-136 suicide drones. According to a Ukrainian spokeswoman, “about two dozen” Iranian drones have been spotted in the skies above Ukraine in recent weeks, and at least half were shot down.

The Iranian drone threat will not be going away soon. To mitigate its impact, in both the Middle East and Ukraine, three things must be done.

First, the US needs to increase its air defense cooperation with the Gulf states. Not only would this counter Iran’s drones, it could also be an important and much needed confidence building measure between regional countries and the White House. It could also jumpstart the proposed Middle East Strategic Alliance concept. This idea was first proposed by the Trump administration as a way to deepen US engagement in the region while increasing burden sharing. For a number of reasons, it never got off the ground. Perhaps the growing aerial threat from the Iranian drone and missile strikes will restore it to the agenda.

Second, more needs to be done to reduce the Iranian drone threat to Ukraine. The US and its allies should be providing more advanced air defense systems to Ukraine, such as the Patriot missile system. While some progress has been made to bolster Ukraine’s air defenses, more can be done. Also, Middle Eastern countries that have a lot of experience dealing with Iranian drones, such as Israel, should be working closely with Kyiv to share intelligence and best practices to defeat these drones.

Finally, the Biden administration and its European allies should pull out of the talks with Iran in Vienna over its nuclear program. It is becoming clear that the Iranians are not really interested in securing a new deal at this time. Also, due to Russia’s war against Ukraine, and the increasing role Iranian drones are playing there, it is inconceivable for the US and Europeans to think that the talks can continue in good faith. A return to robust economic sanctions would also limit Iran’s ability to produce drones.

With the introduction of Iranian drones in the skies above Ukraine, a regional challenge is becoming more global. From Ukraine to the UAE, it is in everyone’s interests that regional air defenses are improved and Iranian aggression is checked.