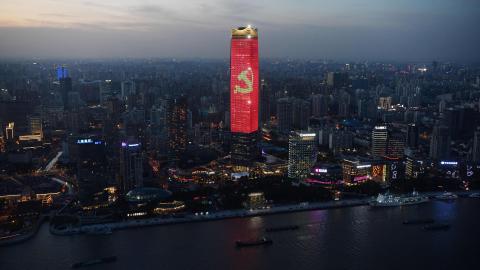 Michael R. Pompeo is a distinguished fellow at Hudson Institute. At Hudson, his work focuses on promoting US national security, technological leadership, and global engagement. He served as the 70th United States secretary of state from April 2018 through January 2021. He previously served from January 2017 to April 2018 as director of the Central Intelligence Agency.

As our nation’s most senior diplomat, Secretary Pompeo helped craft US foreign policy based on our nation’s founding ideals, putting America first. America became a massive energy exporter and a force for good in the Middle East, cementing real peace through the work of the Abraham Accords. He placed particular emphasis on renewing alliances with key allies, including India, Japan, Australia, and South Korea.

Secretary Pompeo’s time at the State Department marked the end of naïve engagement with the Chinese Communist Party, pulling back the curtain shielding the egregious acts of the CCP that threaten American jobs and freedoms. He focused efforts on calling out and punishing perpetrators of attacks on basic human dignity in places like Venezuela, North Korea, Iran, Nigeria, China, and elsewhere. Secretary Pompeo also led a team that executed America’s largest-ever global repatriation effort in the wake of the COVID-19 pandemic.

Prior to joining the Trump administration, Secretary Pompeo was serving in his fourth term as congressman from Kansas’ 4th District. He served on the House Intelligence Committee, Energy and Commerce Committee, and the House Select Benghazi Committee.

After graduating first in his class at the United States Military Academy at West Point in 1986, Secretary Pompeo served as a cavalry officer patrolling the Iron Curtain before the fall of the Berlin Wall. He also served with the 2nd Squadron, 7th Cavalry in the US Army’s Fourth Infantry Division.

Once completing his active duty, Secretary Pompeo graduated from Harvard Law School, where he was an editor of the Harvard Law Review. He worked as an attorney at Williams & Connolly immediately following Harvard.

In 2021, he founded Champion American Values PAC, supporting political candidates across the country who will champion the US and its founding principles first.

Secretary Pompeo is originally from Orange, California. He is married to Susan Pompeo and has one son, Nick.

As Prime Minister of Australia from 2018 to 2022,  Scott Morrison successfully led his nation through the most difficult and significant challenges Australia had faced since the Great Depression and the Second World War.

Under Mr Morrison’s national leadership Australia had the third lowest COVID fatality rate in the OECD, one of the highest vaccination rates in the world and an economic response that enabled Australia to outperform all G7 and most OECD nations in both employment and economic growth.

On the international stage, Mr Morrison was known for his leadership role to counter an increasingly assertive China in the Indo-Pacific region. Mr Morrison pursued this by:

Domestically Mr Morrison continued to steward the Australian economy to its lowest unemployment rate in almost 50 years, while being one of only nine countries in the world to maintain a AAA credit rating from all major international credit rating agencies.

Prior to becoming PM Mr Morrison served in senior roles in the Federal Cabinet as Federal Treasurer, Minister for Social Services and Minister for Immigration and Border Protection. In these roles he served on both the National Security Committee and the Expenditure Review Committee of Cabinet, responsible for economic policy settings. Mr Morrison was first elected to the Australian Parliament in 2007.

In 2020 Mr Morrison was made Chief Commander of the Legion of Merit by the President of the United States for leadership in addressing global challenges. He is also recipient of the Jerusalem Prize by the World Zionist Organization in 2019 for services to the Australia-Israel relationship, and the inaugural Grotius Prize by UK Policy Exchange in 2021 for his work and support of the international rules based order.

Ambassador Paula J. Dobriansky, a foreign policy expert and former diplomat specializing in national security affairs, is a senior fellow at the Future of Diplomacy Project at Harvard University's JFK Belfer Center for Science and International Affairs and vice chair of the Atlantic Council’s Scowcroft Center for Strategy and Security. She brings over 30 years of government and international experience across senior levels of diplomacy, business, and defense.

From 2010 to 2012, she was senior vice president and global head of government and regulatory affairs at Thomson Reuters, responsible for designing and implementing a corporate approach for engagement in Washington and other key capitals around the globe. She was instrumental in the development of Thomson Reuters’ financial regulatory strategy. During this time, she was also appointed the distinguished national security chair at the US Naval Academy. Presently, she serves on Rubicon Technologies' (NYSE: RBT) Board of Directors and is on the Advisory Board of Veracity Worldwide.

Ambassador Dobriansky served as under secretary of state for global affairs from 2001 to 2009. Among her primary accomplishments, she established and led the US-India, US-China, and US-Brazil Global Issues Fora which advanced crucial work and international cooperation on environment, energy, health and humanitarian issues. In February 2007, as the president’s envoy to Northern Ireland, she received the secretary of state’s highest honor, the Distinguished Service Medal, for her contribution to the historic devolution of power in Belfast.

Dobriansky has held many Senate-confirmed, senior level positions in the US government, including director of European and Soviet Affairs at the National Security Council, deputy assistant secretary of state for human rights and humanitarian affairs, associate director for policy and programs at the United States Information Agency, and deputy head of the US delegation to the 1990 Copenhagen Conference on Security and Cooperation in Europe. From 1997 to 2001, she served as senior vice president and director of the Council on Foreign Relations and was the first George F. Kennan senior fellow on Russian and Eurasian Studies.

A member of the Council on Foreign Relations, the American Academy of Diplomacy, and the Atlantic Council Board (Executive Committee), she also has served on the Defense Policy Board, the secretary of state’s Foreign Affairs Policy Board, and as chair of the US Export-Import Bank’s Council on China Competition.  She is also a trustee of the Trilateral Commission, on the Board of Advisors of Georgetown University’s School of Foreign Service, and chair of the Bush Center’s Women’s Initiative Policy Advisory Council. Ambassador Dobriansky received a BSFS summa cum laude in international politics from Georgetown University School of Foreign Service, as well as an MA and PhD in Soviet political and military affairs from Harvard University. She has received high-level international recognition from the governments of Poland, Ukraine, Hungary, Romania, Lithuania, and Colombia and is the recipient of five honorary degrees.