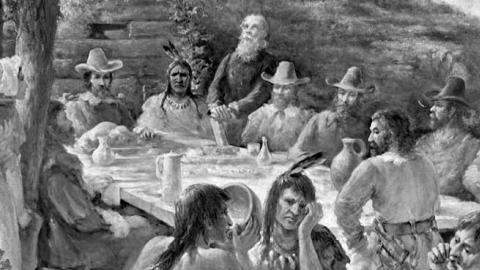 As we mark the 400th anniversary of what has come to be known as the First Thanksgiving, it is sadly necessary to come to the defense of the long-cherished holiday.

Thanksgiving is Americans’ oldest tradition, celebrated by almost every native-born citizen as well as by newcomers, for whom it is a rite of passage into the national family. The tradition extends outside the country. No matter where in the world we Americans find ourselves on the fourth Thursday of November, we come together to give thanks—fulfilling the prediction of Sarah Josepha Hale, the 19th-century magazine editor by whose singular efforts Thanksgiving was transformed from a series of local celebrations on various dates into a shared national one.

The felicitous custom of the holiday demands that no one be excluded. The widowed aunt, the grouchy grandpa, the coworker with nowhere else to go—all receive invitations to dinner on Thanksgiving Day. Americans on the margins of society are included in the celebration thanks to the generosity of individuals, religious organizations and philanthropies that make sure the less fortunate among us have an opportunity to mark the day. Everyone has a place at the nation’s Thanksgiving table, regardless of circumstances or creed.

If this depiction of Thanksgiving reflects what you put into practice every year in late November, increasingly loud voices are telling you to think again. Thanksgiving is under unprecedented assault from progressives who want to expunge it from American life. In our woke era, it has become fashionable in some quarters to attack Thanksgiving as cultural or environmental exploitation. Left unmentioned are gratitude and God.