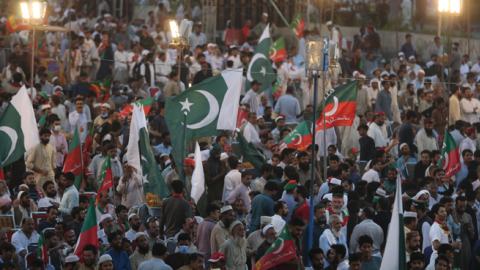 Caption
People board a train at a railway station as they prepare to return home ahead of the Muslim festival of Eid al-Adha in Lahore on July 6, 2022. (Photo by ARIF ALI/AFP via Getty Images)

Pakistan has so far managed to stave off riots and repay creditors, avoiding an economic meltdown like that seen in Sri Lanka Still, Prime Minister Shahbaz Sharif’s coalition government, which took over in April 2022, is grappling with multiple political and economic crises. Pakistan’s rupee is one of the world’s worst-performing currencies, the country’s foreign exchange reserves are abysmally low, and it has been unable to attract much-needed foreign investment.

Domestic political instability and increased vulnerability to terrorism following the Taliban takeover in neighboring Afghanistan add to the country’s problems. Four years of erratic rule by former cricketer Imran Khan has deeply polarized Pakistani society. Ex-Prime Minister Khan’s claims that his ouster through a parliamentary vote of no confidence was orchestrated by the United States, with help from the army leadership, have had an unsettling effect.

Pakistan’s political class is fragmented. Its society has been radicalized further. The economy is weaker than it was four years ago, and the country is more isolated internationally. The all-powerful military establishment has been bruised by coming under criticism, first for helping Mr. Khan into office, and now for helping push him out.

Mr. Khan came to power in 2018 through the open backing of the security establishment, but his government was hobbled by poor coalition management and ineffective governance. As Pakistan’s economic crisis grew, and tensions between Prime Minister Khan and the military establishment deepened, a coalition of opposition parties used the opportunity to push a no-confidence motion against him.

Instead of facing the no-confidence motion in parliament and accepting defeat gracefully, Mr. Khan sought to hold on to power through extra-constitutional means. In the end, the Supreme Court of Pakistan intervened, supported behind closed doors by the army top brass, to ensure that the no-confidence vote took place, and a new government was sworn in.

Mr. Sharif, the current prime minister, is a former chief minister of Punjab state, and the younger brother of Nawaz Sharif, a three-time prime minister. Shahbaz Sharif is a good administrator but lacks the national-level political experience critical to managing a disparate coalition. Mr. Khan, in the meantime, is applying pressure on the government and the military establishment both through social media and street protests.

Pakistan badly needs to get back on track with an International Monetary Fund (IMF) lending program, both to get through its immediate balance of payments difficulties as well as for longer-term economic stability. The political environment makes tough economic decisions, like ending subsidies and raising taxes, difficult to implement.

Pakistan’s current crisis is the culmination of decades of fraught policies. The desire to combat a perceived existential threat from India, the country from which Pakistan was carved out in 1947, resulted in decades of unsustainable military expenditure that depended on foreign, historically American, support.

That external backing ended in part because of changing geopolitics. Rival India, not Pakistan, is now America’s ally of choice. Pakistan’s policy in Afghanistan and its support for jihadi terrorist groups targeting India have also led to a loss of Western support. Unable, or unwilling, to raise revenue from taxes and economic expansion, Pakistan has repeatedly turned to either multilateral institutions or friendly
countries—in the Arab Middle East and China—for budgetary support.

The new prime minister and his foreign minister, Bilawal Bhutto Zardari, have indicated their desire to reframe U.S.-Pakistan relations. However, to truly repair relations with Washington, Pakistan would have to completely revise its foreign and security policy, especially vis-a-vis India and China, which might not be possible in the short term.

Pakistan’s economy remains dependent on the export of cotton textiles, with little investment in diversification. The literacy rate stands at 52 percent, the lowest in South Asia, resulting in an unskilled labor force that migrates primarily to the Gulf and sends remittances back. Pakistan’s ratio of taxes to gross domestic product (GDP) is one of the lowest in the world and key segments of the economy, such as agriculture and some military-run corporations, are exempt from income tax. Instead of raising revenue through taxes, governments have preferred to keep giving subsidies to avoid political and social unrest.

Mr. Khan’s poor management and the impact of the Covid-19 pandemic left Pakistan’s economy badly battered. He changed finance ministers four times in three and a half years and changed his mind on trade and investment policies frequently. In addition to a $6 billion loan from the IMF, over the last four years, Pakistan has borrowed $10 billion altogether from Saudi Arabia, the United Arab Emirates, Qatar and China.

To forestall balance of payments difficulties, Pakistan borrowed in 2019 from the IMF—its 22nd loan from the institution since 1958. Pakistan has a pattern of drawing the first one or two tranches from the IMF and then abandoning the program to avoid fulfilling stringent conditions for economic restructuring. Mr. Khan’s government also initially agreed to the IMF’s demands to lower fuel subsidies in February 2022 but reinstated them once its ouster became imminent.

Though it was a difficult decision politically, Mr. Sharif’s government has rolled back the fuel subsidies and the IMF is expected to release the next tranche of its loan soon. But there is still no quick fix for Pakistan’s economic predicament. Rising utility costs and food prices, and a potential hike in interest rates, will slow industrial activity. That would hurt employment and add to the likelihood of street protests that are already being incited by Mr. Khan and his followers.

This vicious cycle will be difficult to break, even more so at a time when the global economy is recovering from the dual blows of Covid-19 and Russia’s war on Ukraine. Further, Pakistan has refused to open trade with its largest neighbor, India, because it is anathema to Pakistan’s ubiquitous security establishment.

For decades, Pakistan’s military establishment has intervened, directly and indirectly, in Pakistani politics to choose winners and losers. They once chose Mr. Khan but have now discarded him. The former prime minister is using the army’s own playbook against them: blaming everything on a foreign conspiracy, using anti-Americanism and pan-Islamism to rally support on the streets, and labeling anyone who disagrees with him—including military leaders—as anti-national.

The army is finding it difficult to fight an ideology it crafted and the monsters that it created. There are enough people within the lower and middle ranks of the military, in the media, and within the middle class in Pakistani society who believe Mr. Khan’s narrative, as it echoes what is taught in the educational curriculum.

The three key actors right now are the coalition government, the military-intelligence establishment and ex-Prime Minister Khan. The current army chief, General Qamar Javed Bajwa, is reluctant to intervene in politics directly and is still bruised from supporting Mr. Khan for the last four years. Prime Minister Sharif is a good administrator, but his experience in provincial politics might not transfer effectively to national politics. The quicker he solves some of Pakistan’s economic challenges, the better it is for him, irrespective of when the next elections are held.

If Pakistan’s economic crisis continues, the public may forget that it was Prime Minister Khan who is responsible for the mess. Mr. Khan will try to generate chaos, believing that the more he pushes Pakistan to the brink, the more the army is likely to help bring him back to power as the savior.

A wild card in all these scenarios is the role of the Supreme Court of Pakistan, which could upend the situation by disallowing certain politicians from participating in elections or striking down policies. Historically the court has sided with the military-intelligence establishment. Recent years, however, have witnessed judicial activism that has underlying Islamist and populist elements.

The timing of the next elections is important. The next army chief is scheduled to be appointed by the prime minister in November. All major actors—the political parties, the army, and the judiciary—would like their favored person to be prime minister when that decision is made.

The most likely scenario is that things continue as they are right now with the coalition government managing to stay afloat with tacit backing from the military. Neither the coalition government nor the army have any incentive in rocking this rickety boat and both need the next tranche of the IMF loan to come through quickly. Mr. Khan’s momentum is dissipating and, as of now, he has backed off when threatened with imprisonment.

In this scenario, Prime Minister Sharif would extend the current army chief’s tenure by a year and hold general elections, in which his coalition would then win the army’s support. Alternatively, Mr. Sharif could appoint a new army chief as advised by the incumbent.

If the IMF delays the next tranche of its loan and even friendly Gulf states—like the United Arab Emirates and Saudi Arabia—are slow to offer support, there could be a real threat of Pakistan’s default on debts. In that second, less likely, scenario, the army might install an interim caretaker government to stabilize the economy. Such a caretaker government would comprise technocrats and retired politicians and judges and would have a limited mandate.

A direct military coup is the least likely scenario but cannot be ruled out. If the politicians continue to squabble, and an interim government fails to restore economic health, General Bajwa or his successor could take over, promising to clean up the political and economic mess. Deep divisions within the army make such a scenario possible but not very likely. If Mr. Khan and his reverential following threaten violence and the current prime minister asks the army to put down the violence, the possibility of direct army intervention would increase.