Skip to main content
Past Event
Video Event | Dialogues on American Foreign Policy and World Affairs: Grand Strategy in a New Age of Geopolitics with Edward Luttwak
Wednesday 7:00 - 8:00AM 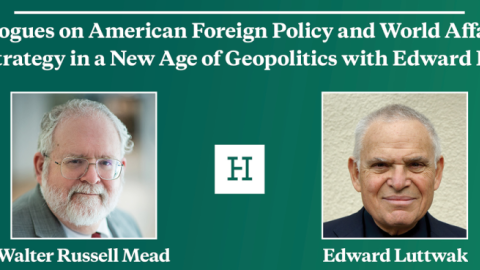 Author, Strategic Advisor to the U.S.

Join Hudson Institute for a discussion with Edward Luttwak on geopolitical challenges that have emerged in the 21st century, from competition with revisionist powers such as Russia and China to regional crises in the Caucasus and Middle East. Hudson Institute Distinguished Fellow Walter Russell Mead will moderate the conversation.

Edward Luttwak is a strategic advisor to the US. Luttwak has served on US presidential transition teams, testified before committees of the US House of Representatives and the Senate, and has variously advised the US Armed forces, the Department of Defense, the US State Department, a White House Chief of Staff and the governments of treaty allies, including Japan. Luttwak is the author of many books, including his seminal Coup d’État: A Practical Handbook and, most recently, The Rise of China vs. the Logic of Strategy.

Dialogues on American Foreign Policy and World Affairs is a Hudson discussion series moderated by Walter Russell Mead, one of America’s leading analysts of international affairs and Global View columnist at The Wall Street Journal. The series features influential policymakers and opinion leaders in candid conversation on timely questions of international affairs and national security.