China Wants to Replace the U.S. in the Pacific 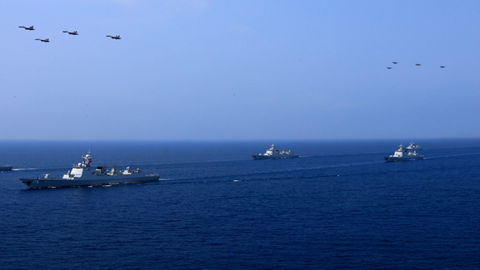 Caption
A PLA Navy fleet including the aircraft carrier Liaoning, submarines, vessels and fighter jets take part in a review in the South China Sea on April 12, 2018. (VCG via Getty Images)

China, especially under President Xi Jinping, seeks a return to what it regards as its rightful position, replacing the U.S. as the world’s dominant economic and military power. Previous U.S. administrations have slouched in the direction of understanding the strategic competition that grows from this ambition but did little. The current U.S. administration gets it, as evidenced by the National Defense Strategy’s identification of China as a major peer competitor.

Another proof is the Department of Defense (DOD) report, “Assessment on U.S. Defense Implications of China’s Expanding Global Access.” It examines how China is modernizing its military by reverse engineering, cyber-espionage and joint ventures that blackmail foreign companies into handing over critical military-use technology. Noted are China’s $1.024 trillion global investments and its $735 billion investment in global construction contracts from 2006 to 2017.

Prominently mentioned in the DOD report’s executive summary is China’s effort to establish military bases in Cambodia and Vanuatu.

A military base in Cambodia would facilitate Chinese naval operations round the bend of the continent, extending its influence from the South China Sea across Southeast Asia and along trade routes connecting the Middle East and China. Cambodia declined.

A Chinese base in the southwest Pacific archipelago of Vanuatu is at least as troubling. Vanuatu’s string of islands lie south of the Solomon Islands, which ring Australia to the east and include Guadalcanal — site of the half-year Allied campaign in 1942-43 to dislodge Japanese forces and preserve lines of communication between the U.S. and Australia. China’s effort to build a military base on Vanuatu broadcasts Beijing’s interest in Oceania, the southwest quadrant of the Pacific that includes Australia and New Zealand.

Oceania is abundant with islands, reefs and atolls whose names also became famous in World War II: Truk (now called Chuuk), the Marianas, Guam, Kwajalein, Okinawa, Iwo Jima. The list of amphibious and naval battles in these places is long and bloody. More Americans — about 3,000 — perished in three weeks of fighting on Guam than have been killed since U.S. combat operations against the Taliban began 18 years ago (2,372 as of July 2018).

Vanuatu’s government has said publicly that it is not interested in hosting a Chinese military base, but the issue does not end there. Achieving great-power status has never been merely a question of military superiority. Cyber-dominance, “lawfare,” hybrid warfare, propaganda, technological advantage in such fields as artificial intelligence and quantum computing/sensing, as well as economic power, are essential tools for today’s aspiring global hegemons. China is particularly attuned to money as a lever to achieve power, even as Beijing builds a very large, modern military.

From 2000 to 2014, Chinese state-owned industries (SOEs), such as Shanghai Construction Group, and private firms, such as Huawei Technologies, loaned Vanuatu $183.82 million — equal to 21 percent of Vanuatu’s $860 million 2017 GDP, a nine-year high. Of this, Chinese firms have forgiven or written off $15 million.

Chinese forgiveness has its limits, however. National Public Radio reported in October on Kenya’s inability to repay China’s loan of $3.2 billion to build a railway from Kenya’s capital, Nairobi, to its port of Mombasa. In December, Chinese authorities reportedly were preparing to take control of the port because of Kenya’s failure to service its total indebtedness of $5.3 billion.

China’s debt-trap diplomacy is spreading across Africa, much like the migratory locusts that blanket the continent south of the Sahara. And Beijing used loans to impoverished Greece as a political lever, persuading Athens to prevent a unified EU position against Chinese aggressiveness in the South China Sea and keeping the EU from proscribing China’s human-rights record.

China’s investments spread across Oceania along with the same peril of debt-trap diplomacy — in simpler terms, blackmail.

Some 2,600 miles south by southwest of Oahu is the independent island nation of Samoa (not to be confused with the nearby U.S. territory of the same name). It has received $175 million in Chinese loans for airport upgrades, medical centers and government buildings. As with Vanuatu, China’s loans to Samoa round out at 22 percent of the island nation’s 2017 GDP.

The Kingdom of Tonga and the Republic of Fiji form an approximate isosceles triangle with Samoa. Chinese SOEs have been the primary lender to Tonga since 2001, totaling $160 million, or 38 percent of Tonga’s 2017 GDP. China’s SOEs have loaned Fiji more than $930 million, about 18 percent of its 2017 GDP of $5.061 billion, for low-cost housing, road and other improvements.

During the same period — roughly the past decade — China loaned Papua New Guinea (PNG) about $4.9 billion, or nearly 22 percent of its 2017 GDP. PNG is the eastern half (the western half is Indonesian) of the large island 100 miles north of Australia’s Cape York Peninsula. Port Moresby, PNG’s capital, is as critical to U.S.-Australian communication lines today as it was in WW II.

Other Chinese loan recipients include the Cook Islands and New Zealand.

The U.S. position as a Pacific power is linked to its continued engagement with Oceania. Washington’s Compact of Free Association, or COFA, with three island nations — the Marshalls, the Federated States of Micronesia and Palau — gives them access to such U.S. government programs as FEMA, the Postal Service, the FAA, FCC and National Weather Service, and financial assistance.

Among the U.S. military presence in the Marshall Islands is an Army garrison and a station on Kwajalein Atoll used to track U.S. missile tests. Guam, an American territory, hosts a key U.S. military port, airfield and logistics center needed to conduct sustained combat operations in the Western Pacific. American Samoa and the Commonwealth of the Northern Marianas also are U.S. territories; the Marines used a refurbished airfield on the Mariana island of Tinian in a 2013 exercise.

The U.S. territories and three island nations are links in the so-called Second Island Chain that envelops the Asian mainland at a distance. An imaginary line through these islands, extending westward 1,700 miles, ends in Taiwan; the U.S. presence is a bulwark for the defense of Japan, Taiwan, South Korea, the Philippines, Australia and New Zealand.

The strategic case for continued U.S. engagement is straightforward: China’s capture of the islands, or its ability to deny their use to the U.S. military, would force the U.S. to choose between accepting a military position that threatens communications with Australia/New Zealand and in the rear of its major Asian allies, or the equally unpalatable division of its forces to defend large regional allies while neutralizing the threat from a Sinocized Oceania to the east.

Oceania is an example of how a very small investment in time and money can have an outsized strategic effect.

Congressional action to preserve and extend the COFA agreements in Oceania is sensible and necessary; so are increased U.S. Navy and Coast Guard visits. U.S. aid and presence counter China’s “debt diplomacy,” secure the backyards of our major allies, prevent the region’s use as a launch pad for Chinese operations in the central Pacific, and build on historic ties between the U.S. and the islands.

However, American policy toward Oceania raises a far larger question.

As its name states, the region is defined by the ocean, some 3.3 million square miles of it. China’s engagement there expresses its appreciation of the region’s strategic value as well as its seamless connection to the maritime theater more proximate to the Asian mainland, the South and the East China Seas, and the Philippine Sea.

China continues spending more on aircraft carriers, submarines, surface and amphibious ships, next-generation autonomous systems and cyber warfare. The investments illustrate Chinese leaders’ correct insight that the center of a future great-power conflict is the seas over which their raw materials arrive and their finished goods sail to market, and on which the growing economy that is the backstop of the communist party’s rule depends.

China’s investments in Oceania are a small indication of its strategic thinking — and a large reminder to Americans that, as in the last great conflict with an Asian power, a future one will be decided at sea.

Our current defense investments do not reflect this. They should.