The Frailty behind Europe’s Triumphalism over the Ukraine War

The Continent’s hopes rely on GOP votes in Congress. 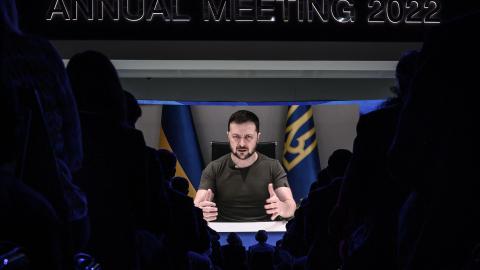 Caption
President Volodymyr Zelensky appears on a giant screen during his remote address to the World Economic Forum annual meeting in Davos, Switzerland, on May 23, 2022. (Fabrice Coffrini/AFP via Getty Images)

The temperature was in the single digits as your Global View columnist struggled to drag his suitcase across the icy streets of Davos to catch the 6 a.m. shuttle bus to Zurich on Saturday. The first winter meeting of the World Economic Forum since 2020 had been a success. While few Chinese and no Russians were present, India and the Gulf states more than took up the slack, and participation from the private sector reached an all-time high.

For Klaus Schwab, the 84-year-old founder and chief impresario of the World Economic Forum, the 53rd annual meeting was a triumph. French President Emmanuel Macron, pushing unpopular reforms to his country’s retirement system, prudently gave Davos a miss. But Ursula von der Leyen, president of the European Commission, and Roberta Metsola, president of the European Parliament, joined German Chancellor Olaf Scholz in delivering major addresses. A closing panel on the global economic outlook featured the president of the International Monetary Fund, the heads of the European and Japanese central banks, and luminaries like Larry Summers.