Iranians Are Protesting the Regime’s Criminality—and America Can Help 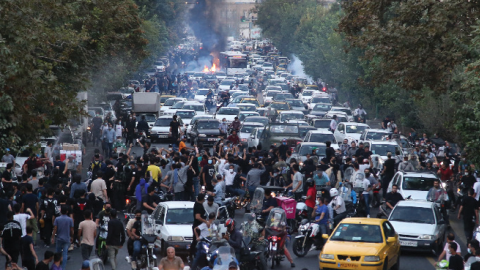 Caption
Following the death of Mahsa Amini in police custody, protestors take to the streets of Tehran on September 21, 2022. (AFP via Getty Images)

The protests erupting across Iran are a reminder the theocratic regime holds power but not legitimacy in the eyes of many Iranians. Twenty-two-year-old Mahsa Amini’s death in the custody of the “morality police” has become a flashpoint not only over the hijab but for pent-up anger at economic collapse and the criminal regime’s impunity.

Most Iran policy discussions in Washington are concerned with confronting its nuclear program and state sponsorship of terrorism. This focus on urgent conventional threats is understandable, but it’s overshadowed another aspect of the country that presents both a threat and an opportunity for US engagement.

Russia is often thought of as the archetypal kleptocracy, a country literally “ruled by thieves.” But Iran also suffers from staggering levels of graft: Transparency International’s latest report on public perceptions of state corruption ranked the Islamic Republic 150th out of 180 countries.

The fish rots from the head down. Within Iran, Ayatollah Khamenei oversees a shadow empire of huge parastatal entities and shell companies with billions of dollars in hidden assets. He uses these to dole out privileges and resources to supporters, entrenching his despotic regime while locking ordinary Iranians out of economic opportunities.

Like China’s and Russia’s, Iran’s kleptocracy isn’t confined to its own borders. In February, two senior Islamic Revolutionary Guard Corps officers were recorded discussing how corruption and mafia relations help fund clandestine activities and military operations. The IRGC, with its proxy Hezbollah, has succeeded in establishing a dangerous criminal enterprise that stretches from Venezuela to Russia.

In this way, the supreme leader and the IRGC have developed patronage networks that exert a stranglehold over Iran while spreading corruption worldwide. But a series of recent scandals suggests this system is finally spiraling out of control — not coincidentally, just as the legitimate economy enters freefall with inflation surging more than 50% and widespread shortages of food, medicine and other basic necessities.

Late last year, as Iran suffered the Middle East’s worst COVID outbreak, Khamenei barred the import of proven Western-made vaccines while regulators fast-tracked one produced by a firm within his business empire. The vaccine was near useless, but Khamenei’s cronies still cashed in.

In February, the agriculture ministry contracted with a private company for the importation of livestock goods that were never delivered, shortly before requesting the central bank transfer a further $735 million to the offending firm. And in May, a 10-story building’s collapse in Abadan killed 41 people, sparking protests against local authorities that had enabled the developer to build an illegal structure with impunity.

These examples, all within the past year, provide just a glimpse of the pervasive corruption that’s crippled Iran. They’ve also tarnished the reputation of President Ebrahim Raisi, who campaigned on promises to curtail graft.

This sprawling kleptocracy may have enriched and entrenched the elite, but it also undermines the legitimacy of a regime that claims to govern with religious and moral authority.

Tehran continues to blame US sanctions for its economic woes. But it is regime corruption and mismanagement, compounded by the dangerous and expensive pursuit of nuclear weapons and regional influence, that have imposed suffering on tens of millions of ordinary Iranians. They have made clear, at protest after protest, that they understand and object to the harm this corrosive system inflicts on their families and their country.

Unlike Russians, most Iranians are not inured to their leaders’ venality. It is time for Americans to listen — and to help.

Kleptocracy is sometimes portrayed as the Achilles’ heel of powerful authoritarian adversaries. Yet the targeting of Russian elites’ assets has not toppled Vladimir Putin, and “maximum pressure” campaigns in Iran and Venezuela have not dislodged those regimes (though they seemed to be working before the Biden administration ditched them in favor of chasing deals with dictators). But escalating efforts to expose and target Iranian corruption at this critical moment could strengthen the resolve of protesters, demonstrate international support for them and inspire other Iranians to join in opposing the regime.

America should prove itself a partner to the Iranian people by releasing as much evidence as it can about the regime’s illicit activities. It should also intensify efforts to identify and freeze regime assets stashed overseas.

This should be accompanied by an information campaign to help all Iranians understand just how much is being stolen from them. And the United States should assist Elon Musk with his offer to deploy the Starlink satellite broadband technology that proved so effective in maintaining Internet coverage across Ukraine.

Iranians are not only protesting the theocracy that constrains them but the kleptocracy that impoverishes them. It is in America’s interests to help them defeat both.