Americans should be thinking about an arrangement more durable than a truce. 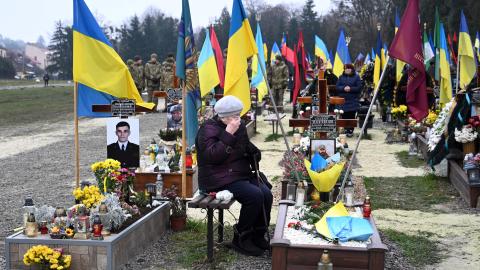 Caption
An elderly woman grieves next to the grave of a Ukrainian soldier during Ukraine's Army Day in Lviv, Ukraine, on December 6, 2022. (Yuriy Dyachyshyn/AFP via Getty Images)

Vladimir Putin’s war in Ukraine is already the worst conflict in Europe since 1945, and it continues to intensify. As winter descends, Russia has escalated its barbaric campaign to force a surrender by destroying Ukraine’s power infrastructure. The country is responding with escalations of its own, striking targets deep inside Russia.

Even as we continue to help Ukraine, Americans must begin thinking about what kind of peace they want. This is not yet a question of maps. We don’t know where the armies will stand when serious peace talks begin, and the military facts on the ground will drive haggling over territory. But boundaries aside, peacemaking is hard. As Polish friends struggling to rebuild their society after communism used to tell me, it is easier to turn an aquarium into fish soup than to turn fish soup back into an aquarium.