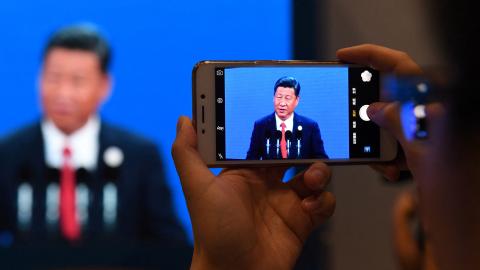 Caption
A journalist takes a photo of a live feed of Xi Jinping speaking at the opening ceremony of the Belt and Road Forum in Beijing, China, on May 14, 2017. (Greg Baker/AFP via Getty Images)

Newly elected speaker of the House Kevin McCarthy made an announcement last month with important consequences for American foreign policy. His colleague Mike Gallagher, a Marine Corps veteran and PhD, will lead a select committee "to expose and fight against the Chinese Communist Party's cyber, trade, and military threats against America." To understand some of the thorniest components of this challenge, Joshua Kurlantzick’s new book, Beijing’s Global Media Offensive, is a must-read.

Kurlantzick covers Southeast Asia for the Council on Foreign Relations, but, as he points out, that corner of the world is only one of the places where China is trying to shape the media environment to its advantage. Southeast Asia, Taiwan, Australia, and New Zealand are often "Beijing’s initial laboratory," but China is "expanding its soft and sharp power strategies to many other parts of the world." China has become a master of "sharp power," which is using covert or hidden means to manipulate people and bury negative stories, sometimes even before they are written. Soft power attracts, sharp power distracts.

Starting in the 1990s, China’s communist leadership believed that China "was failing, in a world dominated by Western private media outlets and Western governments’ state media outlets, to get its preferred narratives across." Accordingly, it tried to charm other countries by offering foreign journalists junkets and cushy fellowships, opening Confucius Institutes in universities around the world, and exporting Chinese state-controlled media. By one estimate, China devoted $10 billion annually to soft power by 2015.

Unfortunately for them, it did not work. To be sure, Xinhua, a newswire service that charges less than Reuters or the Associated Press, has been very successful. Kurlantzick warns that "newswire stories often establish initial details about a story and frame the coverage of it," so "Xinhua will increasingly define many outlet’s news agendas." But China’s increasingly aggressive behavior toward its neighbors has alienated public opinion in many countries. For example, Pew found that 63 percent of Filipinos viewed China favorably in 2002, but by 2014 that had dropped to 38 percent. COVID-19 drove China’s approval rating down sharply elsewhere. China’s soft power offensive failed as miserably as Russia’s attack on Kiev last year.

Unfortunately for us, China has other tools. Kurlantzick calls Australia and New Zealand the "canaries" of China’s sharp power strategy. Business leaders there who were friendly to China took over Chinese-language news media, manipulated ethnic Chinese voters, funded research institutions that might otherwise ask probing questions about China, and lined the pockets of influential retired political leaders. This worked for a time, but as journalists like John Garnaut exposed China’s ill deeds, it sparked a backlash. Australia has stood firm under a torrent of Chinese threats and insults over the past few years, and New Zealand is quietly cutting out China’s infiltrations.

China’s sharp power offensive has been fiercer, and the backlash even stronger, in Taiwan. China is a latecomer to the disinformation game, but it experiments constantly on Taiwanese society. In one case, the shame from a deluge of false stories drove a Taiwanese official to commit suicide. Chinese propagandists tried to unseat President Tsai Ing-wen in the 2020 election, but popular anger at China’s heavy-handedness carried Tsai to a huge victory.

Although China has not made itself lovable, it is still exporting its model for controlling information. Kurlantzick shows that Chinese firms are taking an increasing share of the "pipes" through which information flows around the world: Huawei erects 5G internet and lays underseas internet cables, and StarTimes’s satellite TV coverage offers access to Chinese state media—and requires consumers to pay extra for Western media—in the developing world. Countries in the Global South are copying China’s model of a closed, tightly controlled internet, and many are backing China’s attempts to seize control of organizations, such as the International Telecommunications Union, that set global technology standards.

Since Xi Jinping’s disastrous mishandling of the COVID-19 outbreak and self-defeating "wolf warrior" diplomacy has turned public opinion in much of the world against China, it would be tempting to downplay China’s attempts to manipulate media. This would be a mistake: China has successfully intimidated American news organizations and academics for decades, its propagandists learn from their mistakes, and its capabilities are growing.

Over the past few decades, acquiring and processing information has become an increasingly important part of economic activity, and it is not surprising that adversarial governments are increasingly interested in exploring other ways to gain power from information. Back in 2000, Bill Clinton blithely stated "there’s no question China has been trying to crack down on the Internet. Good luck! That’s sort of like trying to nail Jell-O to the wall." Since then, China has demonstrated that hammering hard enough can make a lot of that Jell-O stick.

Read in the Washington Free Beacon.