Time Is Right for Genuine Peace between Azerbaijan and Armenia 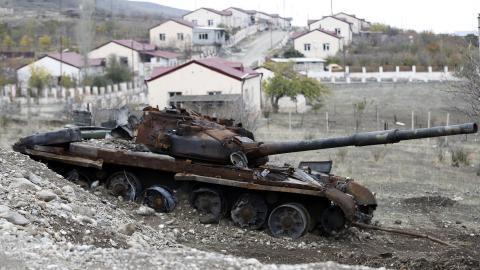 Caption
A destroyed tank in the town of Suqovusan, part of the disputed Nagorno-Karabakh region, on December 2, 2020, after a US-brokered ceasefire temporarily ended fighting between Armenia and Azerbaijan. (Karen Monasyan/AFP via Getty Images)

Dozens of soldiers were killed and many more wounded last month when fighting intensified along the border between Armenia and Azerbaijan. This most recent round of violence was merely a continuation of more than three decades of hot and cold conflict since Armenian troops invaded and occupied a sizable chunk of Azerbaijan’s internationally recognized territory in the aftermath of the Soviet Union’s collapse in 1991.

The most serious fighting came with the Second Karabakh War in 2020, which resulted in a victorious Azerbaijan, a defeated Armenia, and a new Russian peacekeeping force in the region. The deal brokered by Russia that ended the war in November 2020 contained a number of provisions that Azerbaijan and Armenia were supposed to implement. However, almost two years later Russia has been unwilling or unable to persuade the Armenians to live up to their side of the deal. Understandably, this has created a lot of annoyance in Baku. Last month’s fighting was probably a manifestation of this frustration.

However, in recent days the situation has calmed. It is clear that Russia is distracted with Ukraine. Sensing Moscow’s inability, or even reluctance, to play its traditional role as powerbroker between Armenia and Azerbaijan, the US and the EU have started to fill the void.

US Secretary of State Anthony Blinken held phone conversations with leaders of both countries, and national security adviser Jake Sullivan hosted a meeting with his Azerbaijani and Armenian counterparts last month in the White House.

One of the more interesting proposals from the meeting in Prague is an EU civilian monitoring mission along the border between Armenia and Azerbaijan, an initiative worth considering. Such a mission could bring much-needed transparency and build confidence between the two countries. A similar EU mission in Georgia, established after Russia’s invasion in 2008, has proved effective.

The South Caucasus is a region in desperate need of peace and stability. That won’t be easy, but there are two reasons why it is worth the effort.

The first is economic. Armenia is a poor, landlocked country that missed out on many of the region’s big infrastructure and pipeline projects in recent decades because of the frozen conflict with Azerbaijan. This denied Armenia the ability to integrate in the region while forcing Yerevan to become more dependent on Moscow and Tehran. With the prospect of peace, now is the time to look for regional energy, transport, and infrastructure ideas that include Armenia. This would be nothing new.  In the past, Armenians and Azerbaijanis traded with each other and lived peacefully. It is impossible to calculate how many billions of dollars in foreign direct investments the frozen conflict between two countries has cost the region since the early 1990s.

A comprehensive peace deal between Armenia and Azerbaijan would probably lead to normalization between Turkey and Armenia. Reopening its border with Turkey could create new economic and investment opportunities that might benefit not only Armenia but also the region.

Now is the time for all sides to take bold and courageous steps to improve their relations with each another. In the long term this will bring much needed stability and economic prosperity to the region. It would also reduce the influence of Russia and Iran in the South Caucasus.

The high-level diplomatic interventions by the US and Europe are a cause for cautious optimism that genuine peace can be achieved between Azerbaijan and Armenia. In fact, the secretary of Armenia’s security council, Armen Grigoryan, said this week: “We can reach an agreement by the end of the year.”

Let’s hope he is right.