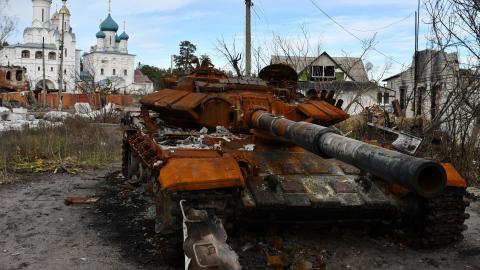 Caption
A destroyed Russian tank stands by the road in front of an orthodox temple in the liberated town of Sviatohirsk, Ukraine, on November 30, 2022. (Andriy Andriyenko/SOPA Images/LightRocket via Getty Images)

View PDF
The fall of the Berlin Wall in 1989 and the resignation of Mikhail Gorbachev as president of the Soviet Union in 1991 marked the start of the USSR’s collapse—but not the collapse itself. While the USSR ceased to exist as a legal entity after 1991, the collapse of the USSR is still happening today. The two Chechen Wars, Russia’s invasion of Georgia in 2008, Russia's annexation of Crimea in 2014, the on-and-off border skirmishes between Kyrgyzstan and Tajikistan, and the 2020 Second Karabakh War between Armenia and Azerbaijan are just a few examples showing that the Soviet Union is still collapsing today.

However, future historians will likely describe Russia's February 2022 invasion of Ukraine as the most consequential moment, if not the final moment, of the Soviet Union’s collapse. When the war in Ukraine will end is unknown, but it will likely mark the dissolution of the Russian Federation (the legal successor of the Soviet Union) as it is known today. Russia has undeniably suffered a major blow to its economy, devastation to its military capability, and degradation of its influence in regions where it once had clout. The borders of the Russian Federation will likely not look the same on a map in 10 or 20 years as they do now. As the final collapse of the Soviet Union plays out and as the Russian Federation faces the possibility of dissolving, policymakers need to start planning for the new geopolitical reality on the Eurasian landmass.

The goal of this policy memo is not to advocate for regime change in Russia—this will be a matter for the Russian people. Nor does this paper predict exactly how Russia and the broader Eurasian region will emerge after the final collapse of the Soviet Union and the dissolution of the Russian Federation. Instead, it establishes realistic goals for Western policymakers, outlines assumptions on which these goals are based, and highlights the questions that decision-makers should ask now to better prepare for the future.

After the dissolution of the Russian Federation, the United States should pursue a set of achievable goals that narrowly focus on the American national interest. Specifically, the US will need to:

Although no one can predict what kind of Russia will emerge after the end of Putin’s rule, some reasonable assumptions can help policymakers plan better. These planning assumptions include:

No one can offer concrete recommendations for policymakers regarding a post-Putin Russia. However, they should ask seven questions now, while considering the aforementioned goals and assumptions, to better prepare for the final collapse of the Soviet Union and the dissolution of the Russian Federation.

1. What should the US do to coordinate an international response to the calls for independence and self-determination that will likely emerge across Russia? The Russian Federation consists of 83 federal entities. Many comprise people with a shared culture, history, and language different from Russia’s Slavic population. Some of these entities already have low-level independence movements.5 In the aftermath of the dissolution of the Russian Federation, policymakers should expect some of these federal entities to declare independence. The United States needs to work with its partners to coordinate a response to these calls for self-determination in a way that is aligned with US interests and is in accordance with international law.

3. How can the US and its partners coordinate an international response to safeguard Russia’s WMD stockpiles? The Russian Federation’s thousands of nuclear weapons, along with its chemical and biological weapons programs, pose a risk to global stability if there is no security or accountability. This issue should be a cause for common concern for the international community. The United States should think now about how it will lead efforts to address this matter. For starters, it needs to invest more in better detection capabilities at border crossings across the region.

4. Should NATO and the EU take advantage of Moscow’s weakness and push for a “big bang” enlargement for remaining candidate and aspirant countries? There are several countries in Europe that aspire to someday join either the European Union, NATO, or both. For countries like Georgia and Ukraine, the primary stumbling block has been pressure and armed aggression from Russia. If the Russian Federation dissolves, the EU and NATO should consider accelerating the membership process for select countries.

5. How can the US and its partners coordinate economic and reconstruction assistance for regions under Russian occupation that will be liberated? Not only will the dissolution of the Russian Federation likely lead to calls for independence from certain regions inside Russia, but places where Russia currently occupies territory outside its borders will also likely be liberated. This includes Transnistria in Moldova, Abkhazia and the Tskhinvali (also known as South Ossetia) regions in Georgia, and Crimea and other places in Ukraine currently under Russian occupation. Washington will have a unique opportunity to help these US partners restore their territorial integrity inside their internationally recognized borders. The faster and more effectively this is done, the more stable the situation will become.

6. What does the US need to do to coordinate an international or regional response to resolving existing border disputes between the Russian Federation and some of its neighbors? These include the disputed islands of Ukatnyy, Zhestky, and Maly Zhemchuzhny in the Caspian Sea,6 the Estonian-Russian de facto border,7 the status of the Northern Territories,8 and possibly the Karelian Question.9 These might seem small issues to Western policymakers located thousands of miles away, but each has the potential to become a regional problem that could have global implications.

7. What can the US and its partners do to roll back Russian influence in other parts of the world, such as in Syria, Libya, and parts of sub-Saharan Africa? Due to Russia’s invasion of Ukraine, Moscow’s influence in certain parts of the world has already decreased. If the Russian Federation collapses, the Kremlin’s client states and proxy forces across the Middle East and Africa will also be affected. The US needs to start working now with its partners to develop a strategy on how to increase Western influence in regions where Russian influence is declining.

Russia’s invasion of Ukraine in February 2022 has changed the security situation in the North Atlantic region in a way not seen since World War II. The Eurasian landmass will not fully feel the consequences of Russia’s invasion, especially if Ukraine is victorious, for years. Policymakers need to recognize the historical magnitude of the situation and start preparing accordingly.

The success of Ukraine on the battlefield against Russia could offer a once-in-a-lifetime opportunity to put Russia back inside its geopolitical box for a generation. This would create a new geopolitical reality not seen in a generation. As policymakers plan for this new geopolitical reality, they should learn the lessons from the 1990s when Western decision-makers naively hoped for democratic governance and economic reforms in Russia that never materialized. If Moscow’s behavior on the world stage since 1991 has shown anything, it is that Russia is unlikely to become a responsible global actor in the foreseeable future. Instead of focusing on the unachievable, American decision-makers should pursue pragmatic and realistic policies that advance the national interest of the US.