To Counter China’s Exported Corruption, the US Must Move Faster 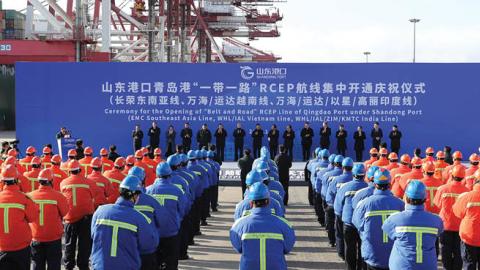 Caption
Workers attend the ceremony for the Opening of 'Belt and Road' RCEP Line, including EMC Southeast Asia Line, WHL/IAL Vietnam Line and WHL/IAL/ZIM/KMTC India Line, at Qingdao Port on January 19, 2021 in Qingdao, Shandong Province of China. (Photo by Zhang

Despite growing awareness of the threat to prosperity and security posed by transnational kleptocracy, corrupt officials and their commercial proxies continue to siphon trillions of dollars out of the developing world each year with impunity. Meanwhile, the enduring influence of predatory elites in vulnerable democracies such as Armenia, Georgia, Malaysia, and Ukraine has prevented the consolidation of rule of law and emergence of strong democratic institutions.

These situations are often created or exacerbated by interference from the world’s most dangerous authoritarian regimes. China, Russia, and Iran are all kleptocracies themselves and consequently have no qualms about using bribery as a tool of foreign policy, routinely exploiting corruption risks in the world’s poorest and most vulnerable countries to advance their own economic and political objectives.

The Biden administration has repeatedly indicated that countering kleptocracy is a top-tier concern for US foreign policy and national security, while measures to combat foreign corruption continue to gather bipartisan support in the 117th Congress.

This makes particular sense in the context of a long-term confrontation with China. The Belt and Road Initiative in particular has supercharged corruption throughout the developing world, as local elites are offered kickbacks in return for strategically significant infrastructure projects that plunge their countries into unsustainable debt. And despite the institutional venality of the Chinese Communist Party elite, Xi Jinping has cleverly positioned himself as a global anti-corruption champion by prosecuting hundreds of thousands of supposedly crooked officials.

Waging a genuine war on transnational corruption and kleptocracy will undermine authoritarian ambitions while re-engaging populations suffering under predatory elites. Despite this, the United States and its democratic allies have yet to address an inherent weakness in their anti-corruption capabilities: The propensity of China, Russia, Iran and other powerful authoritarian regimes to act swiftly in corruptly exploiting situations without diplomatic considerations, respect for international law, humanitarian concerns or any of the other constraints under which democracies normally conduct foreign policy. This enables them to steal a march on democracies when defending their interests or advancing their influence within societies in political turmoil.

To counter opportunistic kleptocratic encroachment and the consequent entrenchment of hostile oligarchic interests in countries undergoing such democratic transitions, the US should pioneer and lead a new “rapid response” model. This would counteract authoritarian attempts to export corruption by instead providing a surge of financial and technical support for measures advancing rule of law.

A modest but significant step in this direction is currently under consideration by the US Congress. First introduced in 2019, the splendidly named Countering Russian and Other Overseas Kleptocracy, or “CROOK” Act, would deploy a network of anti-corruption specialists to US Embassies worldwide. It would also establish a permanent anti-corruption fund at the State Department, funded by a portion of fines issued under the Foreign Corrupt Practices Act, that can be deployed at short notice. The United States currently spends just $115 million on support for anti-corruption programs worldwide; it is estimated that the CROOK Act could bolster that figure by $16 million each year.

Defending the US financial system from authoritarian abuse and targeting overseas kleptocracy are two sides of the same coin. Earlier this year, the United States passed its most significant anti-money laundering reforms since the USA PATRIOT Act. Similar ambition from the Biden administration and 117th Congress is now needed to elevate America’s decades-long fight against corruption overseas--and turn the table on increasingly bold authoritarian adversaries at a critical time for democracy and capitalism worldwide.