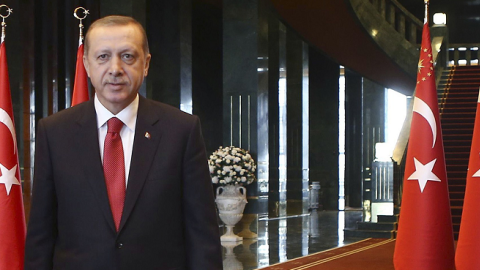 When John Churchill, later the first duke of Marlborough, led the Anglo-Dutch alliance against Louis XIV, he and his ally differed constantly over tactics. Marlborough sought a knock-out. The Dutch preferred maneuver warfare to the risk of all-out battles. But the two states agreed on the broader goal: preventing Louis from achieving hegemonic continental power.

Alliances - or alliance members - that cannot agree on ultimate objectives are in trouble. NATO member Turkey and the rest of the Atlantic alliance once agreed on basic principles: democracy, and the need to keep the Soviets from swallowing the part of Europe that remained free after World War II. No such agreement about basic principles unites Turkey with the rest of NATO today.

Turkey's current leadership - President Recep Tayyip Erdogan and his Justice and Development Party, known by its Turkish acronym, AKP - have led Turkey on a steady drift away from democracy since Erdogan came to power in 2003. Turkey now holds more journalists in its prisons than does any country in the world. The oppression does not stop with individuals - Erdogan fined an opposition media group $2.5 billion dollars in 2009 for "evading taxes."

The AKP's siege of democracy doesn't constrain only the organs of free speech. A law passed earlier this year restricts the judicial system's independence and corrodes the state's rule of law, and the government is now considering a draft security measure that would give Turkish police sweeping new powers. More than forty people were killed across Turkey in October protests against Erdogan's hands-off policy in defending the besieged Syrian border town of Kobani. Orthodox churches in Iznik, near the Sea of Marmara, and Trabzon, on the south coast of the Black Sea, have been converted into mosques.

The U.S. Congress recently passed a law that requires the Obama administration to submit annual reports on Christian churches in Turkey and the Turkish-controlled portion of the Republic of Cyprus that have been looted, turned into mosques and casinos, or otherwise desecrated. The AKP is not choosy about which non-Muslim religion to oppress, though. The party's anti-Semitic words and actions are pushing young Jewish Turks to leave the country. Their flight mirrors Turkey's own departure from the circle of free and open societies.

At odds with the Alliance

Turkey's foreign and security policy parallels its departure from democratic institutions. Under Erdogan, Ankara is at odds with NATO's interest in a stable pro-Western anchor in its southeastern quadrant. "ISIS Draws a Steady Stream of Recruits from Turkey," read a New York Times headline from September this year that described the active recruitment of Turks to the terrorist group operating in Syria and Iraq. Ten Arab states joined the United States in signing an agreement in September to cooperate in destroying ISIS. Turkey declined, and Erdogan's administration continues to ignore would-be jihadists as they transit through Istanbul south to join ISIS. Meanwhile, Turkey remains a major financial backer of Hamas.

Ankara's security policy goes beyond assisting violently anti-Western terrorist groups - it weakens NATO itself. The Erdogan government announced its intent to purchase a Chinese anti-ballistic missile system a year ago. The Chinese system is not interoperable with other NATO members' Patriot anti-ballistic missile. This loss of interoperability would deprive Europe of Asia Minor's large defensive extension into the heart of the Middle East - and into a region where the prospect of Iranian nuclear weapons mounted aloft ballistic missiles with steadily increasing range is real. Erdogan balked on the deal under Western pressure, But no final decision has been reached, and a Turkish attempt to negotiate a better deal with China is at least as plausible an explanation for for the delay as is any reconsideration of Turkey's obligations to NATO. As of this writing, Turkey is dispatching ships, including naval combat vessels, to explore for hydrocarbons in violation of Cyprus' exclusive economic zone, part of which the Italian company ENI had previously licensed. Italy is a member of NATO and of the European Union, which Turkey says it wants to join.

In the meantime, the fate of Kobani, a medium-sized city with a large Kurdish population situated on the Syrian side of its border with Turkey, remains uncertain. Turkish Foreign Minister Mevlut Cavusoglu has said that Kurdish fighters will be permitted to cross into Syria to fight ISIS, but Turkey neither pledges large quantities of combat equipment, nor guarantees the use of the Incirlik airfield for launching airstrikes against ISIS. Thus the terrorist assault on Kobani continues, portending a massacre if ISIS succeeds.

What the West can do

The West is beginning to respond to Turkey's inaction and outright hostility. Ankara's bid to join the U.N. Security Council in October fell short. Despite 154 letters of support for Turkish membership, Spain received 132 votes in the General Assembly while 60 members voted for Turkey.

More important, distinguished French intellectual Bernard-Henri Levy, writing in the Oct. 12 edition of New Republic, asked whether Turkey should remain in NATO if Kobani falls. The U.N. vote and the Levy article signal that more questions will be raised about Turkish participation, and probably its membership in major international organizations such as NATO. The Alliance has never ejected a member, but its charter specifically states that the NATO is "founded on the principles of democracy, individual liberty, and rule of law." The current Turkish government's actions demonstrate contempt for these principles domestically and abroad.

U.S. policy does not recognize the widening gulf between Turkey and the rest of NATO. Business carries on largely as usual, for example in the State Department's August 2014 approval of Turkey's request to purchase $320 million dollars of air-to-air missiles and supporting logistics. This is an insignificant fraction of the arms that the United States has sold since Erdogan took power over a decade ago, and bringing these arms sales to a stop would allow Washington to send an unmistakable message, while stopping short of terminating Turkey's NATO membership.

Included in future arms sales to Turkey are 100 F-35 stealth fighters. Completing the sale would give Turkey a qualitative and destabilizing advantage over Greece's F-16s. It would threaten the emerging security relationship between Israel, Cyprus, and Greece, which is the best hope to replace the democratic anchor that Turkey once represented at NATO's southeastern perimeter. It would further dilute the political coherence of the Atlantic alliance, which is already under strain as Russia continues daily to test Baltic air defenses.

European security is threatened today in ways unseen since the early days of the Cold War. The Middle East's borders are now as much a part of history as their creation a century ago. Turkey sits at the center of these regions and is as likely to disrupt the alliance politically as it is to challenge the West's security interest in a secure southern border. Only through concerted, effective action would Washington and NATO's policies reinforce one another and increase the alliance's defenses.