Why Hungary and Poland Are Welcoming Ukrainian Refugees 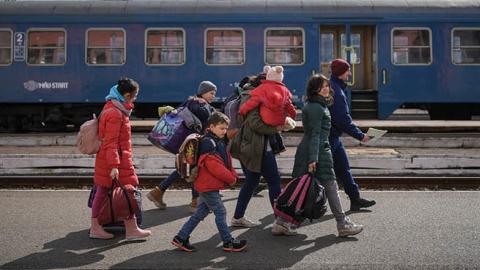 As Vladimir Putin’s bloody assault continues against Ukraine, Poland and Hungary—the two European Union (EU) countries that have been the toughest in Europe on irregular migration—have opened their borders to hundreds of thousands of refugees. What caused the shift away from fences and legal barriers towards reception centers? Certainly not alleged double standards benefitting the mostly white and Christian Ukrainians. Poland and Hungary are actually showing to the world what an “abuse-proof” international asylum system would look like.

Today’s international asylum system is based on the 1951 Refugee Convention. The original goal of the 1951 Convention (and the 1967 Protocol that followed it) was to provide protection to political refugees fleeing the Eastern bloc. The convention-based asylum system however is woefully ill-equipped for the challenges of the twenty-first century, since priority is based on mobility, and geographical vicinity to a signatory country is equated with a right to stay, indiscriminately providing benefits to all border-crossing strangers. Since the collapse of the Soviet Union though, a large percentage of asylum-seekers were not trying to escape individually targeted persecution by a repressive, totalitarian government. This is unlike the Muslim Uyghurs, the Falun Gong practitioners, and Christians in China who have no chance to leave China regardless of being victims of apparent genocide, and are therefore unable to get help under the convention.

The international asylum regime first came under enormous pressure during the 2015 Syrian refugee/migration crisis when hundreds of thousands of people flocked to the southern land border of the EU crossing through the Western Balkans. To control the massive inflow of asylum seekers, Hungary—the EU country bordering the Balkans—erected physical barriers on its southern border. At the same time, the Hungarian parliament also devised a legislative “fence,” the centerpiece of which was the concept of “safe third countries,” that rejected any asylum claim as inadmissible if the applicant arrived at the Hungarian border through a state where he was not exposed to physical harm or persecution. In November 2021, the Court of Justice of the European Union found that Hungary infringed the convention-based EU law by doing so.

The second challenge came during the fall of 2021 when Belarus tried to artificially engineer a migration crisis to divide the EU, by flying in asylum-seekers from the Middle East and directing them towards the Polish borders. Poland responded by passing legislation barring asylum seekers from applying for international protection once inside the country, and there were also reports of authorities repeatedly pushing back asylum seekers to Belarus. These measures successfully thwarted the bid by Putin’s Byelorussian henchman, Alexander Lukashenko, to attack the EU with an engineered migration crisis. Eventually, Byelorussian authorities were forced to transport away asylum seekers from the border to avert a humanitarian catastrophe. Although the Polish measures seemed to violate EU law, criticism at the European level was moderate, as more and more governments toughened their asylum policies, following Hungary’s and Poland’s lead.

Russia’s recent barbaric invasion of Ukraine has triggered a massive influx of refugees. Approximately 4 million Ukrainians are expected to seek refuge in the first safe country, almost two-thirds of them crossing into Poland and Hungary, which opened their borders with a warm welcome. Unlike people from the Middle East, Ukrainians already were permitted to enter and stay in the EU without a visa. On Thursday, the EU for the first time initiated the Temporary Protection Directive which granted citizens and legal residents of Ukraine residency status for up to three years without having to go through the lengthy and complex asylum procedure. The Polish and Hungarian governments joined the unanimous vote. The directive originally entered into force in 2001 following the refugee crisis in Kosovo and is meant to tackle the mass influx of non-EU asylum seekers. Nevertheless, the mechanism was not activated during the Syrian crisis mainly because the 100,000 asylum requests in 2014 didn’t qualify. Later on, the tough stance adopted by a number of countries, including Poland and Hungary, most probably would have prevented its application.

In the past eight years, migration and refugee crises have begun to tear the existing international law and order to pieces. The remaining pieces should be rearranged to create a system that would support those in need but also deter abuses by huge flows of irregular migrants.