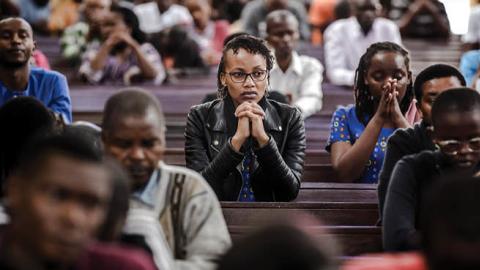 As cheerful greetings of "Happy New Year" fade across the world, life gradually settles back into "the new normal." And alongside various concerns about yet another pandemic season, new issues emerge. For those of us who follow international religious freedom, the plight of Christian believers—the most widely targeted faith group in the world—comes back into focus.

Countries such as North Korea, Afghanistan and Pakistan have long been archetypes of deadly abuse against their beleaguered Christian minorities. But in recent months, dangers to Africa's Christian believers—and particularly converts from Islam—are swelling exponentially.

Examples abound: In recent days a Muslim father in central Uganda hanged his wife and two children because the young mother and oldest child converted to Christianity following Christmas services. Uganda—a country that is 82 percent,14%20percent%20of%20the%20population. Christian—is increasingly the site of brutal atrocities against Christian pastors, families and churches.

Meanwhile, in neighboring Kenya, six Christian villagers were killed in early 2022 by suspected al-Shabab militants. Another Christian man was murdered nearby less than a day later. In the first attack, at least one victim was shot, another hacked to death with a machete and others burned alive while asleep.

In Burkina Faso, Aid to the Church in Need recounted: "In the last weeks of October a total of 147 persons – among them eight pregnant women and 19 children under five – had to flee from two villages on the Niger border. The displaced people ... explained that many of them had been identified as Christians and that the terrorists were expressly seeking them out to kill them because of their faith."

The Counter Extremism Project recently highlighted political turmoil in Somalia that has widened the door for al-Shabab while weakening the fight against terrorism. According to a State Department report, "Al-Shabaab continued to impose its own interpretation of Islamic practices and sharia on other Muslims and non-Muslims, including executions as a penalty for alleged apostasy in areas under its control."

African Christians are most certainly at risk. On Jan. 6, The Christian Post reported that more than 400 million Christians around the world live in countries that persecute churches—and that persecution is only worsening. "Across Africa," the report says, "from sub-Saharan Africa to East Africa, there are at least a couple of dozen terrorist organizations that have the ambition, from their point of view, to install caliphates in their territories."

Even North Africa isn't without its own unholy reputation for anti-Christian abuses. Algeria was noted as Open Doors 24th worst persecutor in 2021, alongside Tunisia (26th) and Morocco (27th). Christian converts are the primary targets of persecution, not only due to family and extended family accusations and threats, but also because of abuses imposed by local leaders and elders. The converts' new faith is opposed—sometimes violently—by both family and community.

Nigeria has long had the dubious distinction of being Africa's most brutal persecutor. Just days before this past Christmas, Anglican Canon Hassan John, who serves in Jos, Nigeria, explained in a personal interview: "For Christians in northern Nigeria, especially this year, Christmas was full of anxiety and fear from continuing attacks by Islamist Fulani militias and the Boko Haram terrorist Islamic sect. Many couldn't reunite with loved ones because the roads were dangerously spotted with terrorists."

And true to form, Christmas was indeed another season of mourning in Nigeria. A 37-year-old Catholic priest was shot dead by gunmen while returning home after leading mass on Christmas Eve.

Then on Jan. 9 came a shocking report from multiple sources that a beloved Nigerian Catholic bishop, Matthew Kukah, had been ordered in for questioning by a state security agency," because he had criticized Nigeria's government for complicity in the face of kidnappings and other persecution of the country's Christians. He had not yet been summoned for questioning "at the time of this writing, and his circumstances remain unsettling and unclear.

The common denominator in this broad array of African violence is radical Islamist ideology, which infects individual Muslims, local mosques and villages, and coalesces into terrorist organizations. And, menacingly, small organizations eventually find their way into global Islamist networks.

An alarming December 2021 report from Memri revealed that across the African continent, off-shoots of ISIS continue to expand. And notorious terrorist groups such as al-Shabab, Boko Haram and Uganda's Allied Democratic Forces are cooperating with the Islamic State by specifically targeting Africa's Christians as their primary targets.

In West Africa, ISWAP—Islamic State West Africa Province—has been increasingly active in the Nigerian violence against Christians and has recently embraced factions of Boko Haram—long notorious for mass kidnappings and massacres.

Meanwhile, in East Africa, Memri's report introduced ISCAP: "With no formal announcement, the Islamic State (ISIS) quietly launched attacks, including suicide operations, in another Christian-majority African country, Uganda, during October and November 2021. These attacks were claimed by ISIS's newest affiliate, known as the Islamic State Central Africa Province (ISCAP), which has so far carried out operations in three other countries: the Democratic Republic of the Congo (DRC), Mozambique, and Tanzania."

It is likely—and worrisome—that the Biden administration will turn a blind eye to the burgeoning network of Islamist radicals who are killing African Christians half a world away. And although American churches may pray for African believers, the objects of their intercession may at times be seen as God's children ... but "not like us."

It is timely, then, to reflect on an illuminating comment, recently placed alongside a photo of slain African Christians. Memri cited a quote from ISIS: "[Our] war against Christians is a war without borders and without stagnation. It is a single war on multiple fronts ... the Christians of America are no different from the Christians of Uganda."