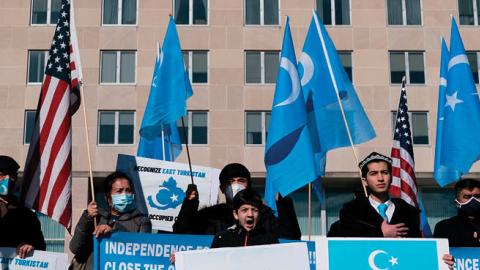 Caption
Uyghurs of the East Turkistan National Awakening Movement (ETNAM) hold a rally outside the US State Department calling on US President Joe Biden to increase pressure on the Chinese Communist Party, on February 5, 2021 in Washington, DC. (Photo by ALEX EDE

On Monday, the United States, European Union, United Kingdom, and Canada stated with unmistakable clarity that they will not stand idly by in the face of genocide. Following days of disappointing meetings with Chinese officials about China’s human rights abuses against its Uyghur population, Secretary of State Antony Blinken announced that the United States and like-minded partners would be imposing sanctions on key leaders within the Chinese Communist Party who have orchestrated the mass atrocities suffered by the Uyghur people.

Despite much hand-wringing by American and EU officials, the walls did not come crumbling down. In the face of a united alliance calling for China to end its ethnic and religious repression of Uyghurs, Beijing complained and sanctioned ten EU individuals and four entities in response to the announcement. But nothing catastrophic happened to any individuals or countries involved, and America and its allies will live to fight another day.

This has been a long time coming. The EU has not sanctioned China since the Tiananmen Square massacre over 31 years ago. Since 1945, the motto “Never again” has signified the global commitment to ensuring we never allow another Holocaust to happen. For too long, European nations have ignored the same evil in China that reared its ugly head in Europe eighty years ago.

Whether from a lack of international support or because the previous administration had difficulty coordinating with allies, over the past several years, the United States has been left to combat China’s genocide of the Uyghurs alone. The Trump administration developed a regime of sanctions, visa freezes, and import and export bans designed to stop companies from using forced Uyghur labor in their supply chains and induce China to halt the oppression of its own people. These efforts culminated in the administration’s decision to impose Global Magnitsky Human Rights Sanctions in 2020 and Secretary of State Mike Pompeo officially recognizing China’s actions as genocide in January 2021.

For all its power, the United States can only do so much on its own to combat China’s horrific abuses, and under the previous administration there was little hope for international cooperation on this issue. Biden administration officials have preached a return to American leadership on the international stage and alliances with countries who share our core values, and their actions in defense of the Uyghur people—at least thus far—are a credit to this aspiration.

In Monday’s announcement, Secretary Blinken acknowledged that not only is the CCP a threat to China’s own citizens, but it is also engaged in a campaign to undermine the values of the free world. The CCP has perfected the art of oppressing and torturing Chinese citizens for its own political ends and has now begun to export its tactics of oppression to authoritarian governments and dictators around the world. As a global power with the means and motivation to shape the world in its own image, China represents a threat to civil and human rights wherever it wields its influence.

Monday’s sanctions must mark the beginning of a period of steadfast resistance to China’s pernicious goals and actions. There is reason to hope that these sanctions will inspire a renewed effort for other countries to respond in kind with sanctions and condemnation, creating a chorus of outrage and collective consequences that will become increasingly difficult for China to ignore.

Conventional wisdom in Washington acknowledges that China is a geopolitical rival to the United States. These sanctions remind us that is also a moral threat. The pledge, “Never again,” has been broken too many times in the past eight decades—in Rwanda, Sudan, Cambodia, Yugoslavia, and now in China. Sanctions may not be enough to stop the genocide of the Uyghurs, but at least we can say we didn’t do nothing.

Read in The Bulwark