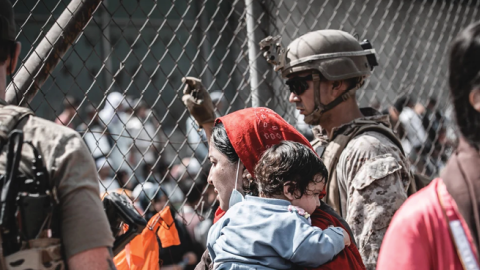 On August 16, 1,500 Afghan religious minorities watched with mounting anxiety as the wheels pulled up on the last U.S. charter flight for evacuees from the UAE airport, carrying a few hundred members of Afghan military families. The minorities were left behind in Emirates Humanitarian City (EHC), the evacuation center in Abu Dhabi, where over 12,000 fleeing Afghans found temporary shelter beginning last August. When American engagement winds down there in September, the minorities fear abandonment to a fate of indefinite limbo, in lockdown at EHC, or, if the UAE tires of supporting the camp and deports them, certain death in their Taliban-ruled homeland.

Washington used to care about and even prioritize persecuted religious minorities, but it doesn’t now, not even those from Afghanistan, a country identified among the world’s worst religious persecutors by the bipartisan U.S. Commission on International Religious Freedom (USCIRF). As I noted in these pages, shortly after Senate confirmation, Secretary of State Antony Blinken announced that religious freedom would not be given priority in his department’s list of human-rights concerns. Afghanistan’s religious minorities — Christians, Hazara Shiites, Hindus, Sikhs, Ahmadis, Bahais, and Jews — face veritable genocide as “infidels” and “apostates” under Taliban Islamic law, yet these groups were all excluded from U.S. priority refugee admissions status. The administration ignored repeated pleas by USCIRF and hundreds of advocates to include them in the “P-2” priority visa category

After Kabul’s fall last August, religious minorities, women judges, girl athletes, foreign-aid workers, and others seriously threatened by the Taliban furtively streamed, family by family, to hiding places around Kabul and Mazar-i-Sharif. They were vetted there and transported to the EHC by American charities and private air-charter operations. These flights were approved and facilitated by the U.S. government. Based on what the U.S. had pledged to the UAE, the evacuees expected to be relocated from UAE lily pads to permanent safe havens within 90 days.

Instead, while most other groups have moved on, these 1,500 religious refugees worry about being stranded, along with a few thousand others who lack valid immigration claims. The UAE generously provides food and shelter, but Afghans at EHC are denied rights to citizenship and the freedom to build new lives. As they see it, they are in a form of detention.

One is a 28-year-old Christian whose rescue I’ve helped shepherd over the past year. A contact in St. Louis named John, who had formerly worked with persecuted people through the nondenominational Voice of the Martyrs, sent me an email on August 24, 2021, asking for help in finding an evacuation flight for Ben (not his real name). He and his wife, Pari, a naturalized citizen from Afghanistan, had supported and ministered to Ben via the Internet nearly a decade ago.

Alone and hiding in Afghanistan’s western city of Herat, Ben turned to John because relatives and neighbors were pressured to give information about people like him to the Taliban, who lost no time hunting down “apostates.” John, Pari, and their friend, Laura, became Ben’s “points of contact,” or a bridge to me and a network of American charities and religious-freedom experts.

Ben is well acquainted with persecution. As a teenager, he explored evangelical teachings on the Internet and converted to Christianity in 2014. For this, his family regularly beat him, until once he fell unconscious and had to be hospitalized. Fearing for his life, he moved to Kabul, aiming to finish high school. There, he joined a house church in the western Karte Seh district that was started twelve years earlier by South African Pastor Werner Groenewald and his wife, Hannelie, a physician. Within their sprawling guesthouse, the couple also ran an aid organization, Partnership in Academics and Development, and a seminary. Ben befriended their teenage son and daughter and found emotional and spiritual support within the Groenewald’s church community. This abruptly changed on November 29, 2014, with a shocking attack that drew international coverage. That Saturday afternoon, three Taliban gunmen broke into the guesthouse and, in unprovoked rage, murdered Werner and his two children, Ben’s friend Zabih Bamiani, and another Afghan. The compound exploded in flames from a suicide bomb. Ben was spared, but his church and adoptive family were wiped out. In the ensuing years, Ben struggled to overcome this trauma as he continued his studies in computer science. As he wrote last week to Laura, “I can sum up the Taliban in two words: brutal and deadly. I used to tremble when I saw them.”

We connected Ben with the Shai Fund, which arranged travel and a safe house in Mazar, and, in October, put him on one of nine evacuation flights sponsored by its partnering charity, Mercury One. At EHC, Ben had an Afghan roommate (now resettled in the U.S.) who, he says, pressured him to join in Muslim prayers. He knew firsthand bad things could happen to those exposed as apostates. The intolerant culture that has long barred non-Muslim worship inside Afghanistan accompanied some into EHC. As a result, Ben and the other Christians avoid the prayer room and, last Christmas, passed on public celebrations. In March, Shai Fund director Charmaine Hedding wrote in an assessment report on EHC that “Christians have been living in greater fear with the passing of time in the EHC, as it becomes harder to hide their faith living in such close quarters. They face daily struggles to practice their faith and are threatened physically, verbally, and psychologically.”

The U.S. reportedly resettled several hundred EHC religious minorities, but this was primarily based on military, family, or work ties with Americans — not religious persecution grounds. While 75,000 Afghans resettled under Operation Allies Welcome, as of June, a mere 350 more entered by humanitarian parole, including a few for religious persecution. Worldwide, there are limited refugee options, even for these 1,500 religious minorities, who have charitable funds ready to support their resettlement.

The Commission on Inalienable Rights, which Blinken disbanded last year, found that prioritizing specific rights at specific times in foreign policy is a pragmatic and legal necessity. At this time, as the State Department pulls up stakes at the UAE camp, prioritizing visas for these religious refugees from the Taliban is demonstrably necessary. To abandon them would betray America’s oldest traditions and highest principles.

Read the full article in the National Review.