Sudan’s Bashir Must Face Justice for His Genocides

One of the world’s most brutal dictators has just fallen. What comes next is key. 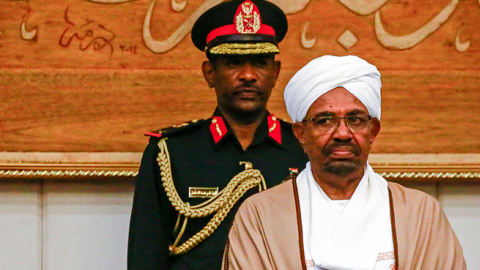 Caption
Sudan's President Omar al-Bashir attends a meeting with his new 20-member cabinet as they take oath at the presidential palace in the capital on March 14, 2019. (ASHRAF SHAZLY/AFP/Getty Images)

p(firstLetter). Sudan’s long-time president, Omar al Bashir — among the world’s most ruthless rulers — was arrested yesterday in a military coup that followed four months of popular protests in Khartoum, the country’s capital. Whatever other charges he will face for terror and corruption, he should be promptly tried for his worst offense: genocide.

In 70 years since the adoption of the U.N.’s Genocide Convention, only two genocides have been officially recognized by the U.S. government while they were still occurring. The first was the Bashir regime’s genocide in the western Darfur region. In mid 2004, a few months after the Darfur conflict began and a few months before the Bush administration recognized the genocide, the State Department dispatched a team to refugee camps across the border in Chad. The team interviewed survivors from the Muslim Fur, Masalit, and Zaghawa tribes, which were targeted for extermination.

A preeminent expert in the field, Gregory Stanton, summarized the “shocking” survey results:

The survey’s findings convinced the administration to declare the Bashir regime’s campaign in Darfur a racially motivated genocide. All told, the State Department estimates that over 300,000 tribesmen have died in in the region, and hundreds of thousands remain displaced today.

Despite an arrest warrant for genocide issued against him by the International Criminal Court in 2010, Bashir remained president and protected from prosecution. He continued to receive crucial diplomatic and financial support from Qatar, Saudi Arabia, Iran, Egypt, Turkey, Russia, South Africa, China, and the Arab League, among others.

As I wrote 15 years ago in these pages, Darfur should be counted as Bashir’s second genocide. He waged the first from the early 1990s to 2002, against the Christians and animists of southern Sudan and the people of the Nuba Mountains. That bloody campaign was undertaken in response to a rebellion against the forcible imposition of sharia law, which violated guarantees of southern autonomy included in the 1972 Addis Ababa Agreement. Though the Nuba are mostly Muslim, they resisted Bashir’s call to jihad against the south and were consequently declared “apostates,” marked for death along with non-Muslims, in a 1993 government fatwa.

Over 2 million eventually perished and 5 million were displaced as a result. Bashir used, as he would again in Darfur, a combination of military and militia tactics, inflicting deliberate mass starvation and sanctioning widespread rape, enslavement, and bombing and strafing of hospitals, schools, and other civilian structures. It ended in 2005 with the Sudan Comprehensive Peace Agreement (SCPA). Its traumatic legacy lives on in the unending conflict and political dysfunction of South Sudan, which became an independent country under the terms of the SCPA.

For 30 years, Bashir led a military dictatorship bent on forcibly Islamicizing and Arabizing Sudan’s disparate tribes and religious groups. His regime carried out amputations, stonings, and other harsh punishments for such offenses as women wearing pants instead of skirts, the consumption of alcohol, adultery, homosexuality, and apostasy and blasphemy against Islam.

Bashir’s millions of surviving victims yearn for justice, but it is unlikely to come from the usual international bodies. The ICC, currently preoccupied with trying to prosecute American vets of Afghanistan and Iraq, is too politicized to be entrusted with adjudicating the most egregious of all human-rights violations. And U.N.-backed hybrid tribunals have been infamously slow and expensive.

Bashir should instead be tried for genocide by a Sudanese court. Secretary Pompeo should honor the Bush administration’s genocide designation by helping Khartoum identify Sudanese jurists and witnesses, many of whom are now in exile, and by providing expert legal counsel and encouragement. It’s the best chance the world stands of forcing this monster to answer for his crimes.