The Virtues of Patriotism 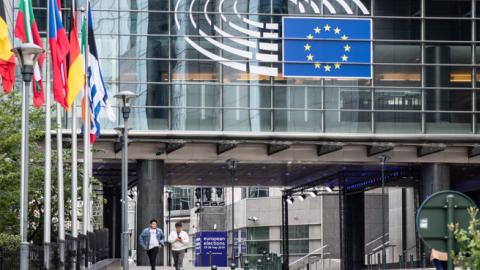 Caption
The European Parliament building. From 23 May to 26 May, the citizens of 28 EU states will elect a new parliament. (Getty Images)

The elections to the European Parliament underway now through Sunday present a major war of ideas between the “Europe of Nations” and the “Europe of Brussels”—between national democratic sovereignty and supranational authority.

On May 13, I participated in a conference in London organized by the White House Writers Group and attended by leading conservative intellectuals and political figures, including Yoram Hazony, Daniel Hannan, Roger Scruton, John O’Sullivan, Nile Gardiner, and Polish cabinet minister Anna Maria Anders, among others. The conference, “Europe at a Crossroads: The Virtue of Nationalism,” for the most part echoed Margaret Thatcher’s famous Bruges speech advocating a Europe of “independent sovereign states” in opposition to a democracy-deficient supranational EU that would “try to suppress nationhood and concentrate power at the center of a European conglomerate.”

Two days before, on May 11, Secretary of State Mike Pompeo addressed the Claremont Institute’s 40th anniversary gala dinner with a spirited defense of the universal principle of democratic sovereignty as central to the new Trump doctrine in American foreign policy. Pompeo declared:

This new pride in taking America’s interests seriously is not just an American phenomenon. Countries all over the world are rediscovering their national identities, and we are supporting them. We are asking them to do what’s best for their people as well. The wave of electoral surprises has swept from Britain to the United States all the way to Brazil.

Pompeo also noted, “President Trump has helped put the world back on track to a nation-first trajectory,” and warned “democratic leaders” who “are not responsive to the jolts of patriotism which are sweeping the world . . . won’t be leaders for long.”

For more than a half a century, the United States automatically has supported more European integration and opposed efforts to reassert national sovereignty. As recently as 2016, President Obama traveled to the United Kingdom to warn the British that as far as America was concerned, they would be sent to the “back of the queue,” if they dared to approve Brexit. In contrast, then-private citizen John Bolton remarked,“Americans should welcome Britain’s coming Declaration of Independence.”

With the advent of the Trump Administration, automatic support for continued EU centralization and reflexive opposition to national sovereignty has ended. Pompeo, speaking directly to the Europeans in Brussels, forthrightly declared: “Our mission is to reassert sovereignty, reform the liberal international order, and we want our friends to help us assert their sovereignty as well.”

President Trump in his official speeches, informal remarks, and tweets has made no secret of his support for democratic sovereignty in general, and his sympathy for Brexit in particular. As Trump told the U.N. in 2018, “Sovereign and independent nations are the only vehicle where freedom has ever survived, [and] democracy has ever endured.”

Interestingly, the pro-Brussels forces link supporters of democratic sovereignty in Europe with the Trump Administration. In a European Council on Foreign Relations (ECFR) paper titled “How Anti-Europeans Plan to Wreck Europe and What Can Be Done to Stop It,” European integrationists complained:

Like Trump or his Brazilian counterpart Jair Bolsonaro, European nationalists are usually critical of “political correctness”—to the extent that they present their opposition to women’s rights, LGBT rights, other cultures, or measures to mitigate climate change as a crucial part of a pluralist political debate. They are particularly suspicious of multilateralism, as expressed in the Paris climate agreement and the Marrakesh migration pact.

In other words, for the pro-Brussels elite it appears that some retrograde “anti-Europeans” do not endorse political correctness, the green-socialist global agenda of the climate change regulators, and mass migration from the developing world. Imagine that!

The core argument, of course, is not between “pro-Europeans” and “anti-Europeans,” but between two different visions of Europe. It’s an old conflict. During the 1960s French President Charles de Gaulle advocated a “Europe of States” and strongly opposed European Commission President Walter Hallstein’s push for more centralization. Twenty years later, in the 1980s, British Prime Minister Margaret Thatcher battled with then-European Commission President Jacques Delors over the same general argument of democratic sovereignty versus undemocratic supranationalism.

In recent years, the vision of a “Europe of Nations” embraced by de Gaulle and Thatcher is re-emerging both intellectually and politically.

In 2017, a group of leading European intellectuals, including Pierre Manent, Roger Scruton, Ryszard Legutko, Chantal Delsol, Remi Brague and others issued “The Paris Statement: A Europe We Can Believe In,” in which they declared: “The True Europe is a community of nations. We have our own languages, traditions, and borders, yet we have always recognized a kinship with one another.”

The Paris Statement uses the term “oligarchy” to describe the current status of the EU regime. The choice of oligarchy versus democracy, cuts to the heart of the matter. The political renaissance of the “Europe of Nations” is manifest in support for Brexit and for a range of political forces endorsing democratic sovereignty in the European Parliamentary elections.

These forces are not always in agreement on economics, on foreign policy, or other issues. Some are Thatcherite, some are Gaullist, some are sophisticated, some are not, some are traditional and classically liberal, some are given the nebulous label of “populist,” which is meant as a derogatory epithet.

Interestingly, the Paris Statement declared “we have our reservations” about “populism” because “Europe needs to draw on the deep wisdom of her traditions.” Nevertheless, the statement continued: “We acknowledge that much in this new political phenomenon can represent a healthy rebellion against the tyranny of the false Europe, which labels as ‘anti-democratic’ any threat to its monopoly on moral legitimacy.”

Clearly, the core moral question is who rules: self-governing democratic peoples or undemocratic supranational authorities? This is the same argument for democratic sovereignty constantly repeated by President Trump and his chief foreign policy lieutenants Mike Pompeo and John Bolton.

And, indeed, 27 years ago, Daniel Hannan noted, that in a radio broadcast to the French people, Charles de Gaulle emphatically declared, “democracy and national sovereignty are the same thing.”